The Uphill Battle is an award-winning documentary produced by Invision Pro and directed by Maria Morgunova.

About The Uphill Battle
Canadian karate exists because of the dedication and enthusiasm of senseis, coaches, judges, athletes, and parents. Prior to 2017, talented athletes faced hardships caused by underfunding, stringent rules, and a lack of understanding by higher ups* in the world of Karate, Ontario.

We desperately needed to understand why it was so difficult to succeed in karate in Ontario, and these questions are answered in The Uphill Battle. This award-winning documentary introduces 14 experts: respected instructors, elite athletes, referees, and judges share their experiences and secrets to success. More importantly, all 14 experts have experienced The Uphill Battle.

First and Only Study of Karate in Canada
This film reveals the only known research in the field of karate in Canada. Nobody knows how many seminars, camps, and tournaments are provided by karate clubs today, and there’s no official data on the number of clubs, coaches, and students in Canada and whether these students are children or adults

According to the website dojos.ca, in 2016 there were 932 Martial Arts schools in 105 Ontario cities. However, many clubs are not registered, so it’s not known how many new clubs were opened and when or where they operate. So, we have no idea how many talented athletes could potentially bring future Gold medals home to Canada.

Who Pays for It?
Parents of younger students must pay for everything; with older athletes funding themselves. Serious athletes attend their club most days, with additional training required for physical conditioning. Injuries should be treated immediately, which causes problems when athletes must wait months for treatment under the Ontario Health Insurance Plan.

Points Are Everything!
In spite of sacrifices made by parents, athletes, and coaches, there’s no guarantee talented athletes will make the Canadian national team. If an athlete was unsuccessful at the Nationals, it’s highly unlikely they’ll be accepted onto the team.

Unless there’s an opening, somebody retires, or an athlete is injured, an athlete wouldn’t be placed on an international team because there’s always someone who already has points. Points means success, and decision-makers take athletes with the most points. Athletes must participate in numerous events to achieve the most points and almost all points accrue from international competitions, so what happens when an athlete can’t attend an event because they must work, or they’re injured? Sadly, points become a reflection of a karate student’s financial capacity – not their talent and dedication.

Karate Has Become a Financially Draining Sport
To compete in tournaments many athletes must work extra jobs and/or borrow money. In Karate, the most expensive part of growing elite athletes relates to travel expenses, because there’s no international tournaments in Ontario for young athletes to gain rank and the required experience.

Parents advise that travelling internationally to Europe, South America, or Asia, costs $4,000 – $5,000 per trip, including flights, accommodation, and food. And, parents are required to accompany their children, doubling their expenses. If parents can’t travel, it’s coaches who fill this role, whilst still paying for themselves. Coaches are also required to provide additional training and “babysitting” on a volunteer basis.

It’s Not an Optimistic Outlook!
As it stands today –

Educational aspect of The Uphill Battle
The Uphill Battle is an educational movie detailing the sport of karate, including creating champions and the benefits and uniqueness of karate. Topics include the historical background of Canadian karate, key budget components for growing champions, the appropriate age to commence training, parents’ choices of coaches and clubs, tournaments, travel expenses, parents’ and coaches’ roles in growing champions, judges and rules, and different types of financial support for athletes.

The documentary is extremely informative and ideal viewing for anyone interested in various aspects of Karate, including socializing, self development, sporting achievements, and overcoming problems like ASD and ADHD. 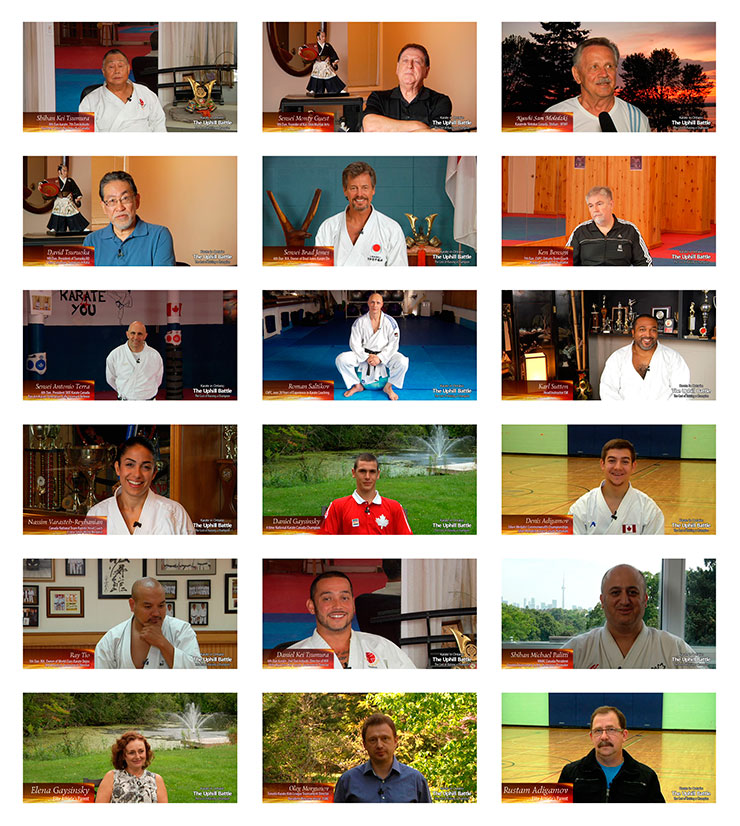 This documentary is for parents interested in learning about Karate, because Karate is an avenue for children to develop winning life-skills; improve confidence; to learn how to think for themselves and achieve top results in every aspect of their lives.

Whether you’re a sports expert, sports psychologist, gym teacher, sociologist, or school teacher, this documentary is an invaluable teaching aid. It shows how to instruct different age groups and covers historical facts, traditions, styles, and much more.

Politicians: Please Take Note!
For any politician interested in promoting Canadian Olympic champions, this documentary is a must! You’ll discover how karate students develop and become champions; the lack of professionally-organised tournaments for students; how talented athletes give up because they can’t afford expenses related to international competitions, travelling, and provincial and national team fees.

We urge Government to show interest in karate and learn why our talented athletes need their support.

You can order DVD or BRD formats here: https://www.invisionpro.com/uphill-battle-documentary/

Canadian libraries who welcome new developmental material can order from vendors like Library Center and Library Bound. A digital format of The Uphill Battle can be found at Hoopla.

It can also be purchased at the Canadian Film Centre.

For those in the Vancouver area (BC, Canada) see: https://smaikarate.com/shop/karate-in-ontario-the-uphill-battle-blueray/

Maria Morgunova: The Filmmaker
Director Maria Morgunova’s background includes 10 years’ experience in journalism and the film and video industry as a videographer, short-story producer, journalist, film editor, and director of many TV shows. Maria has earned an MA of Arts and has developed successful stories and programs for broadcast television, PR companies and the corporate world.