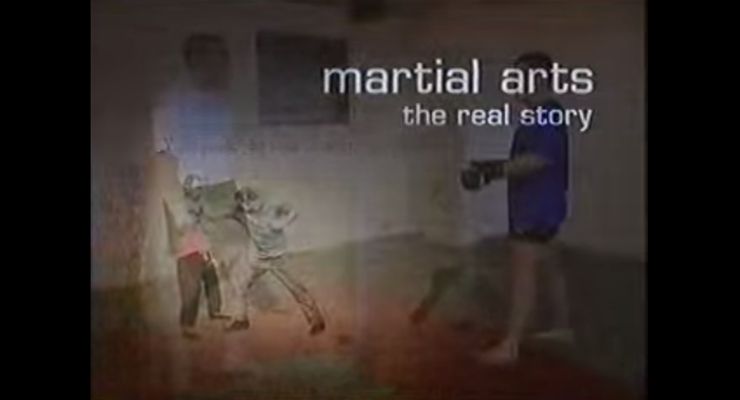 Pacific Street Films’ Martial Arts: The Real Story, takes a look at a wide variety of techniques, and their practitioners. From the legendary “Beast of Amsterdam,” Jon Bluming, whose fists are well-known to the denizens of the Red Light District, to Nan Don Sken, a Thai Boxer whose high flying kicks can easily fell an opponent twice his height, this program is not about Hong Kong myths and Hollywood legends – it’s about the “real thing.” What’s the real thing? Well, they’re fighters who can’t afford to do endless re-takes on a Hollywood set or who only put on padding and gloves to compete in the ring. These are street-hardened brawlers who know that real fights are over in a matter of seconds, and it’s the fighter who gets in the first blow that will usually walk away.

But mindless kicking and punching is not what most fighting systems are all about. Many martial arts are deeply ingrained in the folk and religious traditions of cultures around the world, and many emphasize that the same techniques that can kill an opponent, can also be used to heal — and that fighting prowess goes hand in hand with self-control and compassion. Martial Arts: The Real Story underscores an essential, yet rarely acknowledged martial arts principle: the greatest masters never have to fight. They can, and they will, but they just don’t have to. In the words of the late “Vee-jitsu” master, Florendo Visitacion, “the truly powerful are those who are also restrained.”

Although many Americans are familiar with traditional forms of Karate or Judo, Martial Arts: The Real Story explores some of the lesser-known but equally effective techniques from around the world, including the fighting forms of Chinese “grand ultimate boxing,” T’AI CHI CHUAN; the deadly and ancient art of Indian KALARIPPAYATTU which some claim may be the world’s oldest martial art; French “foot fighting,” SAVATE, which grew to fruition on the tough Marseilles waterfront; and the athletic Brazilian CAPOEIRA, which African slaves disguised as a dance to fool their Portuguese overseers. Relatively unknown forms of the world’s oldest martial art, wrestling, will be explored, including the centuries-old styles of grappling like Viking GLIMA, which is still practiced in Iceland today, and traditional backhold CUMBERLAND WRESTLING in England, which eschews WWF theatrics in favor of down and dirty tussling. Our cameras capture the no-holds barred hand-to-hand training of US Army Airborne Rangers preparing for the next conflict.

Martial Arts: The Real Story presents rare footage, some of it never seen before, including silent newsreels of judo demonstrations in Europe; black and white film of famous masters of the Chinese “soft” arts performing in Taiwan, even footage of the most famous T’ai Chi practitioner, Chen Man Ching.

Martial Arts: The Real Story goes to the heart of disciplines with roots deep in the past, developed through centuries of experience in life and death struggles. Often, truth is stranger than fiction; the reality of the fighting arts is far more compelling than the caricatures frequently presented to the public.

Martial Arts: The Real Story features interviews with Robert W. Smith, an ex-CIA agent whose books were among the earliest to shed light on the often murky and misunderstood world of martial arts, and Joseph Svinth, a former marine, martial arts practitioner and historian, whose research has unearthed some fascinating and long forgotten anecdotes, including the fact that even Teddy Roosevelt had a Japanese judo instructor in the White House.

Documentary about two schools of martial arts. The more ancient forms meld religion, philosophy and physical ability into a way of life. The other school concentrates only on fighting techniques, ignoring their more holistic history. The program interviews experts practicing on both sides of this great divide to try to discover how two groups, going through the same motions, can have such different opinions on the true meaning of these art forms.