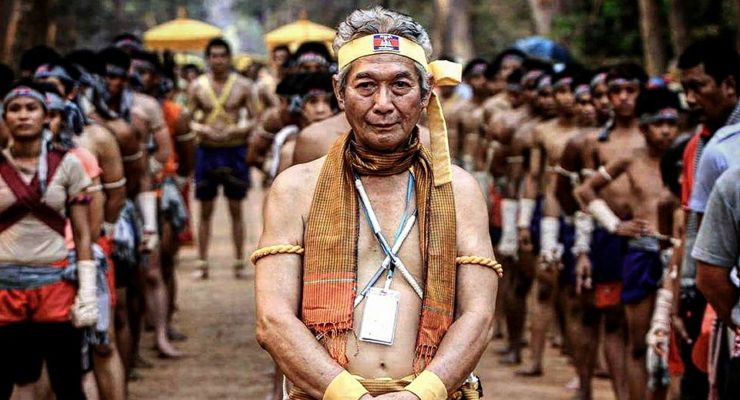 Bokator, the Great Angkorian Martial Art is a new film starring Grand Master San Kim Saen and Antonio Graceffo. The film will be debuting later this year, showcasing Bokator to the world. The film was directed by Tim Pek, an Australian Khmer film maker, most famous for his film of Khmer Rouge retribution and forgiveness, “The Red Sense.” Tim, a Khmer Rouge genocide survivor met Antonio while working on the film “Krabei Liak Goan,” (Buffalo Protecting Child). This Khmer Kung Fu movie pitted the hero, national Bradal Serey champion, Eh Phou thoung against Antonio Graceffo, who played the bodyguard of the villain.

Before there was Muay Thai, there was Bokator, the complete fighting art, developed by the Khmers during the Angkorian Empire. Bokator is the predecessor of modern Bradal Serey, Khmer kickboxing, also called Pradal Serey. Where kickboxing is limited to kicking, punching, elbows, knees, and head grapples, Bokator includes ground fighting, joint locks, manipulations, throws, weapons, and animal styles.

“In addition to helping to make Bokator accessible to people all over the world, I enjoyed making this film because I didn’t have to die.” Said Graceffo, who originally came to Cambodia to find and write about Khmer martial arts.