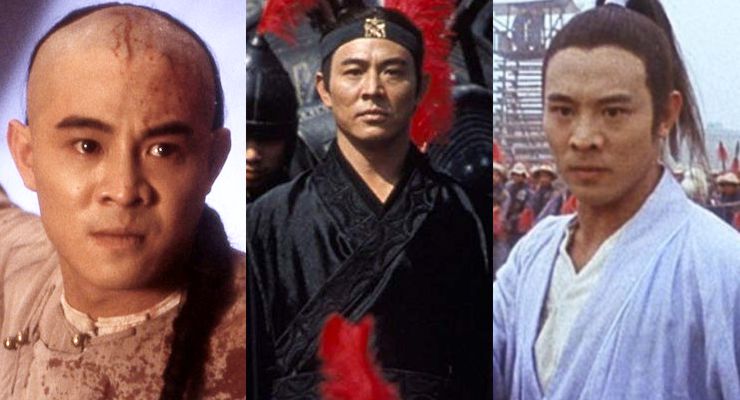 Champion martial artist, Jet Li is a Chinese film actor. He starred in the Once Upon a Time in China series of films and in the critically-praised, international hit Hero.

Synopsis
Born in Beijing, China, on April 26, 1963, Jet Li is an actor and martial artist. At the age of 11, Li won his first national championship in wushu. Li retired from the sport when he was 17 and made his film debut in Shaolin Temple, making him a star in his home country. Since 1994, he has gone back and forth between Chinese and English-language films, starring in Hollywood’s Romeo Must Die, Kiss of the Dragon and The Forbidden Kingdom.

Martial Arts Fame
Born Li Lian Jie on April 26, 1963, in Beijing, China, Jet Li is the youngest of five children. When Li was only 2 years old, he lost his father. At age 8, he began learning wushu, a form of martial arts. Noting his talent, his family sent him to continue his studies at a special school. “I was from a very poor family and we didn’t have enough money for a good school, so sports-school was good; it gave me good food and an opportunity out of China,” Li later explained to Muscle & Fitness magazine.

At the age of 11, Li won his first national championship. As a result, he traveled to more than 45 countries as part of the Bejing Wushu Team. In 1974, Li traveled to the United States and gave a martial arts demonstration for President Richard M. Nixon. He became the All-Around National Wushu Champion that year, a title he held for five consecutive years.

Li retired from the sport when he was 17. Working with director Chang Hsin Yen, he made his film debut in Shaolin Temple (1982). The film helped make Li a star in his native country, and spawned several sequels. By the end of the 1980s, Li had relocated to Hong Kong, where he became involved in the martial arts film scene. In Once Upon a Time in China (1991) he played Wong Fei-hung, a legendary hero who fights against foreigners in this 19th century tale. The popular film had two sequels.

Hollywood Hit
In 1998, Li landed his first English-language role, playing a bad guy in Lethal Weapon 4 with Mel Gibson and Danny Glover. He relocated to Los Angeles for the film, where he underwent intensive language training to prepare for his role as a Chinese crime boss. This action film, especially the scenes with Li, delighted movie audiences.

Li teamed up with rapper DMX and singer Aaliyah for Romeo Must Die (2000) a hip-hop-meets-martial-arts take on the classic tale of young love, Romeo and Juliet. Li and Aaliyah played star-crossed lovers from two warring crime families. The film scored big at the box office, earning roughly $100 million. In 2001, Li co-starred with Bridget Fonda in Kiss of the Dragon directed by Luc Besson. He helped develop the story for the film, which tells the tale of a wronged intelligence officer out to clear his name with the help of a prostitute (played by Fonda). A critic for The New York Times praised parts of the film, writing “his action sequences are like an oil fire, spilling from one room into the next and lighting the interiors with heat and wreckage. Mr. Li and his fisticuffs choreographer, Corey Yuen, have set a new standard for action here.”

That same year, Li starred in the convoluted science fiction tale, The One. He played the two main characters, an unsuspecting California sheriff and a ruthless killer who travels through parallel worlds to eliminate the other versions of himself. The film was panned by critics for its confusing plot and weak acting. Next, he worked with director Yimou Zhang on the Chinese historical drama Hero, in which Li played a warrior in 3rd century China. The movie was released in China in 2002, and earned an Academy Award nomination for Best Foreign Film. He then reunited with DMX for 2003’s crime thriller Cradle 2 the Grave, which received poor reviews and a lukewarm response from movie-goers.

The following year, Jet Li was on vacation in the Maldives when a tsunami hit. It was widely reported that he had died during the disaster. However, he only suffered a minor foot injury while guiding his 4-year-old daughter to safety.

Action Hero
Safe and back on the big screen, Li next starred in Unleashed (2005). He played a man who was a captive killing machine for a crime family. The character was trained to become violent after his collar was removed. To prepare for the role, Li worked with an acting coach. “We went to see wild dogs at the pound [to see] when they’re hungry, when they’re angry … I spent a few days on location at night, with just bread and water, so I could feel it,” Li explained to Muscle & Fitness magazine. The film performed well at the box office, opening at No. 3 in theaters.

In his next film, Fearless (2006), Li starred as the famed Chinese martial arts master Huo Yuanjia. The film tells the true story of Yuanjia’s near-death experience, the tragic loss of his family, and his triumphant victory over his foreign opponents in a martial arts competition. Critic Leonard Maltin called it “emotionally charged and visually striking.” Fans also enjoyed the film, helping it reach No. 2 at the box office in its opening weekend.

Li then played Rogue, a lethal assassin, in War (2007). In the film, Li plays a character who is pursued by the partner of an FBI agent he murdered. Critics panned the film, and it earned only $22 million at the box office. The same year, Li starred in the Chinese film The Warlords directed by Peter Chan.

In The Forbidden Kingdom (2008), Li had the opportunity work with another leading martial arts star, Jackie Chan. The film, however, proved to be a disappointment. As San Francisco Chronicle critic Peter Hartlaub wrote: “The movie also adequately answers the question why Chan and Li haven’t yet done a movie together in their collective 55-year careers: Chan is a much better actor. As for the fighting, and the movie, it’s pretty much a draw.”

Recent Work
Li had better luck with the Hollywood action sequel The Mummy: Tomb of the Dragon Emperor (2008). In this latest installment in The Mummy franchise, Li played a brutal Chinese emperor, buried with 10,000 terra cotta soldiers, who is awoken from his eternal slumbers by a young adventurer (Luke Ford). Brendan Fraser and Maria Bello play the adventurer’s parents who help him battle the evil emperor. Despite being derided by critics, the film scored with action fans. It brought in more than $100 million at the box office.

Continuing to move back and forth between Hollywood productions and Chinese language films, Li appeared in two other films. He starred in Ocean Paradise, a Chinese father-son drama. Li also had a supporting role in Sylvester Stallone 2010 film, The Expendables, about mercenaries who work together to overthrow a South American dictator. The cast also included Jason Statham, Dolph Lundgren, wrestler Steven Austin and ultimate fighter Randy Couture. In 2012 and 2014, he went on to star in the subsequent installments of the popular franchise.

Interested in charitable causes, Li serves as an ambassador for the Red Cross. He established the Jet Li One Foundation in partnership with the Red Cross Society of China. The organization works in several different areas, and provides disaster relief to the people of China.