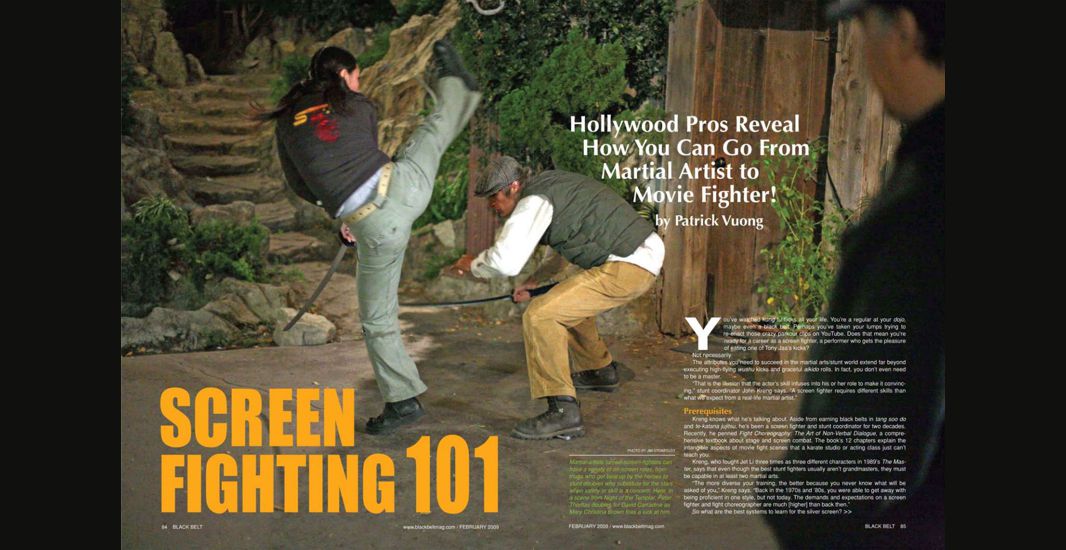 You’ve watched kung fu flicks all your life. You’re a regular at your dojo, maybe even a black belt. Perhaps you’ve taken your lumps trying to re-enact these crazy parkour clips on YouTube. does that mean you’re ready for a career as a screen fighter, a performer who gets the pleasure of eating n of Tony Jaa’s kicks?

The attributes you need to succeed in Screen Fighting (martial arts/stunt world) extend far beyond executing high flying wushu kicks and graceful aikido rolls. In fact, you don’t even need to be a master.

“That is the illusion that the actor’s skill infuses into his or her role to make it convincing,” stunt coordinator John Kreng says. “A Screen fighter requires different skills that what we expect from a real-life martial artist.”

Kreng knows what he’s talking about. Aside from earning black belts in tang soo do and te-katana jutsu, he’s been a screen fighter and stunt coordinator for two decades. Recently, he penned Fight Choreography: The Art of Non-Verbal Dialogue, a comprehensive textbook about stage and screen combat. The book’s 12 chapters explain the intangible aspects of movie fight scenes that a karate studio or acting class just can’t teach you.

Kreng, who fought Jet Li three times as three different characters in the 1989’s The Master, says that even though the best stunt fighters usually aren’t grandmasters, they must be capable in at least two martial arts.

“The more diverse your training, the better because you never know what will be asked of you,” Kreng says. “Back in the 1970’s and 80’s, you were able to get away with being proficient in one style, but not today. The demands and expectations on a screen fighter and fight choreographer are much [higher] than back then.”

So what are the best systems to learn for the silver screen?