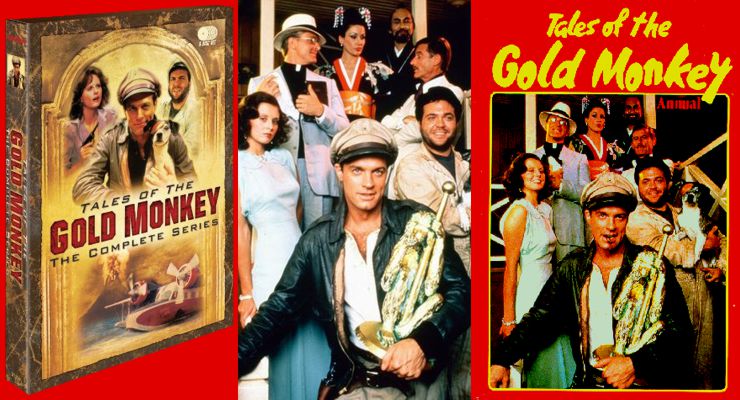 Tales of the Gold Monkey, an ABC-TV action-adventure series, features a rich cast of characters in exotic locales. Stunt coordinator Diamond Farnsworth explains his version of the show: “Jake Cutter (played by Stephen Collins) is a kind of fortune seeker. He’s out to do good for the world, and he’s a really mellow, easygoing guy. The show takes place in 1938 on an island called Bora Gora someplace in the South Pacific. We have Germans and spies and Orientals and martial arts. Every episode is a little different. I think the kids will eat it up. We have a wonderful dog with a patch over his eye who performs excellently.”

Tales has been compared to both the film Raiders of the Lost Ark and the new series Bring “Em Back Alive. “Bring ‘Em Back is more like Raiders,” Diamond observes. “Gold Monkey is a little like it, but it’s hard to compare it to Raiders.” 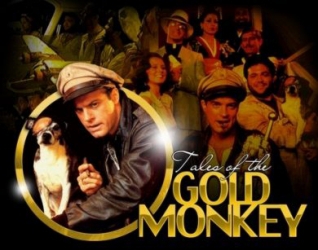 The show has its exteriors shot in Hawaii, but most of Gold Monkey is shot at Universal Studios, on the back lot where the lagoon is located, and on a stage which houses the sets of the Monkey Bar and Sarah’s room upstairs. It is in this room where the action takes place on the day we visit the set.

The scene being shot today involves a fight between Collins and guest star Jared Martin, in which Martin is pushed backward through a door. Or at least, that’s what the audience will see on television. In reality, it will be Diamond Farnsworth knocking stuntman Gary Jensen backward through a door of balsa wood which has been scored (sawed through in places) so that it will break more easily. This shot, which will run a few minutes on film, takes all day to shoot. 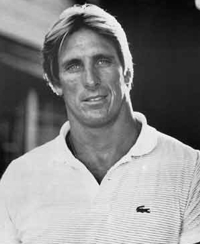 On the set today, Diamond Farnsworth is wearing the same tan pants and baseball shirt as Stephen Collins. They are about the same size and have similar close-cropped dark blond hair. From across the set, it’s difficult to tell them apart. As the scene begins, cast members Collins, Martin, Roddy McDowell and Les Jankey are gathered at the bedside of Caitlin O’Heaney, who has fainted. After some dialogue about why Sarah fainted, an argument arises between Collins and Martin. This scene is shot from numerous angles, taking close-ups of all the principals, including Jack the dog. (Jack only wears his eye patch when he’s acting.) This takes most of the morning.

The Fight
After lunch, the breakaway door is put into position and Gary Jensen dons the white suit Martin wears on the show. Jensen and Farnsworth get into position and resume the fight left off by Martin and Collins. Farnsworth knocks Jensen through the breakaway door, which disintegrates perfectly, and Jensen falls back onto the balcony outside. Using the balcony as leverage, he kicks Farnsworth back into the bedroom and goes in after him. They fall back onto the bed as O’Heaney fires a gun she has removed from the bedside table. After she fires the gun, and the director yells, “Cut!” Collins and Martin will step back into the scene.

This is a typical day on the set for stunt coordinator Diamond Farnsworth. A stuntman for over 15 years, he has worked on Mork and Mindy and many feature movies. Diamond recently doubled for Sylvester Stallone in First Blood, an action thriller about a Vietnam veteran. He has had his share of close calls in the stunt business. “I split my pelvis in two in a movie called Rollercoaster. I got thrown out of the rollercoaster, about 150 feet past my pads. I was laid up for eight months. I broke my leg really bad in a film called Rollerball filmed in Germany with James Caan.”

In the course of his career, Farnsworth has seen film stunts grow more spectacular. “They’re a lot bigger than they were, a lot more dangerous. The key thing in doing stunts is to create an illusion. I’m not a thrill seeker–you don’t have to go out and risk your life for the audiences. There is risk involved, but if you set things up safely and really go over it, then bad things should never happen. A piece of film is not worth your life.”

“There are a lot of people out there doing stunts who are very incompetent. A lot of kids don’t want to serve an apprenticeship. They just walk in and say, “Here I am and this is what I can do.” It took me a while to get to where I am today, but these kids come out of stunt school and think they’re ready to do stunts. Doing stunts on a TV set is a whole different deal than doing it in stunt school. The pressure is on and your adrenalin is pumping. You can get yourself hurt and you can get someone else hurt.”

Despite the risks involved, Farnsworth feels that action shows are here to stay. “Action shows have always been popular. Dialogue after dialogue gets a little boring, but action always keeps you on the edge of your seat.”

As the star of the show, Stephen Collins is naturally enthusiastic about the show’s potential: “The show is called an action-adventure show, and essentially it is, but it’s also a character show. We’re trying to take some characters that we hope are rich, complex, and funny, and who relate strongly to each other, and put them in adventure situations that involve a lot of action. If that works, that will be why the show’s a hit. Most action-adventure shows rely very heavily on stunts, which is wonderful, but they don’t have much else. They tend not to have memorable characters.”

“It’s not your typical macho superhero show. Jake is heroic only when he gets thrown into situations where he has to act. He tends to do the right thing, but he doesn’t think of himself as a hero. I like that, because it grounds the show in reality and gives the audience a character they can care about. That may sound corny, but I’m convinced that that’s what makes a show successful on television.”