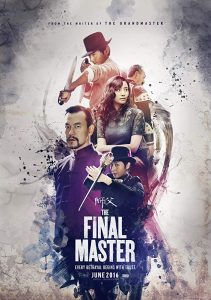 It is 1912, Northeastern city of Tianjin, China is the mecca of martial arts. Chen (Liao Fan 廖凡), a Wing Chun Master comes to the city for the purpose of opening up a school. Chen is desperate to teach because his Grandmaster Zheng’s (Jin Shi Jie 金士傑) last wish is for him to open up a school in that area. But he has to defeat 8 schools in the city in order to do so.

Chen settles in by living on the grounds of an abandoned Buddhist temple with his new wife, Zhao Guo Hui (Song Jia 宋佳). However, Master Chen soon learns he cannot open a proper school here because he was not born in that city. One day, Geng (Song Yang 宋洋), a local working class native, challenges Master Chen and makes him his new apprentice so he can defeat the 8 schools to open up the school. However, by doing this Chen has put his wife and Geng’s life on danger by being a pawn to the local powers along with the Republic of China’s Army also having a presence in the city.
THE REVIEW
This film is not your typical Chinese martial arts film. Based off Director Xu’s acclaimed short novel, the story and characters are very complex, full of plot twists, deceit and double crossings between many of the characters in almost every scene. As a result, you might get confused as to who is doing what to whom. However, what keeps it all together is the supporting characters, who are very well developed, giving the audience an invested interest in them (and not as much with the main characters). What we get is a different take on the martial arts genre that feels like something that has touches of European arthouse cinema blended with a 70’s Shaw Brothers kung fu film flavor to it.

Over the decades we are used to seeing Chinese Kung Fu films where the heroes are clearly drawn out with the archetypal hero’s journey. Martial chivalry, mysticism, as well as Buddhist, Taoist, and Confucianist ideologies (that are inherently tied to Chinese martial arts cinema) are not emphasized as much here, but turned down to a light whisper. If the viewer is expecting a clearly drawn out hero-villain good vs. evil scenario, they might feel something is amiss at first.

There are not many fast edits, cuts, or stylish camera moves. We get long wide shots where the audience can clearly see the action unfold before them. The fights are simply shot and at times very understated. There’s no flying, wire-fu, or modern acrobatic Wu-Shu techniques incorporated into the fight scenes. The willing suspension of disbelief during the fight scenes are very low, because the moves are simplistic, yet deadly, and grounded into reality. Even though the visual dynamism (or eye candy) is taken out of it, the audience is left with the intensity and emotional content of the action to carry each scene. As a result of all this, we get old school traditional fight scenes that are quick, short, and fast that feel very intimate, impassionate, and vicious without resorting to extremely tight camera shots to convey that feeling. This all could possibly come across as “boring” to adrenaline junkies. I suggest they “take their Ritalin and chill” to enjoy the movie.

This was Director Xu’s second effort as the Fight Choreographer on a film. This film won Best Action Choreography at the 2015 Golden Horse Awards. Considering the category was loaded with nominees with close to a cumulative 100+ years of Fight Choreography experience (Corey Yuen for “Rise of the Legend,” Yuen Bun for “The Taking of Tiger Mountain,” and Nicky Li Chung-Chi for “SPL 2” aka “Kill Zone 2”). Off that achievement alone, I feel this is worth a look at.

In closing, I suggest viewers who have certain expectations of what a kung fu movie is should be like drop those ideologies and come in with an open mind and giving this movie a chance to stand on its own merit.