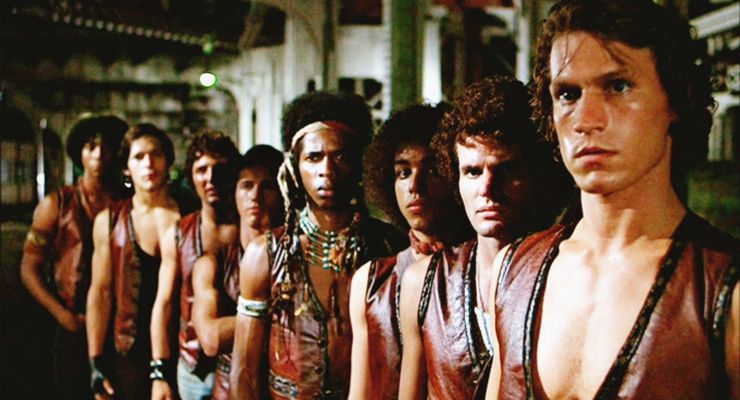 THE STORY
In The Warriors (1979), Cyrus (Roger Hill), the leader of the Gramercy Riffs, New York’s biggest gang, holds a summit with all the major gangs in New York City and the surrounding boroughs. His goal is to unite all gangs to eventually overtake the operations of the whole city, including the police. In the middle of his sermon, Cyrus he is shot and killed by Luther (Michael Patrick Kelly), the leader of the Rogues. Almost immediately a raid by an army of police officers ensues causing everyone to run for their lives. During all the uproar, Luther convinces the Riffs that Cyrus’ assassination on The Warriors. With their leader killed during the anarchy, Swan (Michael Beck) becomes the newly appointed leader of The Warriors, decides to get the group back home to their home turf in Coney Island. However it is not going to be that easy because, The Riffs, looking to get revenge, put out an APB to all the gangs that they must stop the Warriors and bring them back alive, if possible. This however makes the Warriors trek back to Coney Island a night full of hurdles to overcome, where each member is called upon to fight and survive on the urban jungle, while they all learn the meaning of loyalty. Along the way they meet the “Lizzies”- a girl gang, the Baseball Furies- a gang of baseball rejects in Kiss-esque makeup, and Mercy (Deborah Van Valkenburgh), a street wise party girl who wants to tag along because she has no where to go. Will the Warriors be able to clear their names with the Riffs and make it back safely to their home turf?

The Warriors (1979) sparked a lot of controversy when it was first released in 1979. I remember as a kid watching a news report that several breakouts of violence among teens resulted in people getting hurt. To what extent I do not remember. Rumor has it that actor Michael Beck who portrayed Swan was so shook up that he disappeared for a short while and then became a born-again Christian.

The Warriors (1979) has become somewhat of a cult favorite after all these years, especially among the hip-hop crowd. I remember last year at the city rally after the Lakers won their 2nd straight NBA championship, Shaq got up in front of the crowd of 700,000, and yelled out what Cyrus said to the summit meeting of the gangs, “Can you dig it!”

The Warriors (1979) is very simple and still is effective because of its fast pace. However, it seems a little outdated only because of how gangs are recently portrayed in films are portrayed as more violent and operating on a larger scale with more resources. An example, right before the final showdown between The Warriors and The Rogues on the beach, Swan asks his guys, “Is everyone packin”? They all nod yes and are armed with only broken bottles and crowbars. Whereas today “packin” means you have at least a semi-automatic. Times sure have changed.

The Warriors (1979) is very fast paced with minimal dialogue enough to know where each member stands in life and where they might be going. The brisk pace and action should satisfy action junkies. Looking past the action, the true heartbeat of the film is the characters of Swan, the gang leader, and Mercy a loose party girl who does so to escape her bleak existence. They both have a grim outlook on life. In the end, Swan gets an epiphany and realizes that after all the fighting to get back home was (in the big scheme of things) all for nothing, while Mercy looks to start a new life. They are opposites seeking the same thing yet they quietly compliment each other in a few key scenes in-between the action.

THE ACTION
Famed cinematographer Andrew Laszlo, captures the action pretty well giving viewers a sense and a feel for the action sequences. Laszlo keeps the camera a little further back so we can see the action yet still keeps us involved. The editing is not as quick as what you see in action films today, but is enough to get you involved in the brawls. Stunt Coordinator Craig Baxley’s fight choreography is gritty yet still stylized while still serving the film and story. My only complaint (a small one) is the fight with the Warriors against the Baseball Furies got to be a little repetitious with the same sequence of move repeated several times.

THE PRESENTATION
The presentation is nicely put together with little as far as extras are concerned. I really feel an audio commentary with Jeffery Falcon and Lance Mungia would have made this disc a must have for cinephiles and film students because after meeting them their sheer optimism, determination, and passion on how and what they went through to make the film is very infectious. Having seen this film several times during industry screenings, it is my consensus that this film does not appeal to everyone’s tastes. Maybe it’s because they were looking for the next blockbuster? Who knows? But I personally liked this film for its originality and daring to do create something different. If you are looking for something other than your typical formulaic action films, then definitely check this one out.

The Warriors (1979) DVD is pretty much a bare bones disc with only the US trailer as an added bonus. It really would have been nice if there was an audio commentary to accompany the film by director Walter Hill and Andrew Laszlo.