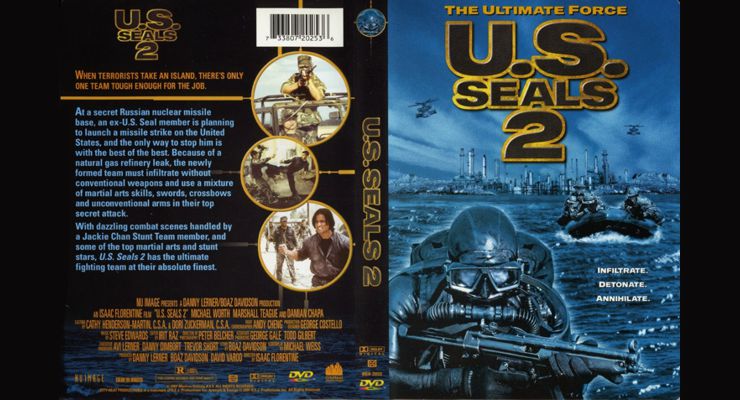 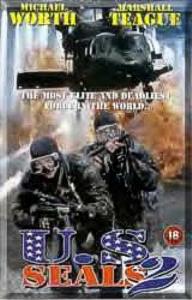 In U.S. Seals 2 (2001) Frank Ratliff (Damian Chapa) is a renegade ex- Navy Seal who kidnaps Dr. Burrows (Kate Connor), a nuclear physicist, taking her to a remote abandoned island off the coast of Siberia to activate 2 Russian Nuclear warheads. He plans to detonate one of the warheads in a major U.S. city if the Pentagon does not fork over to him a ransom of $1 billion dollars in 48 hours.

Retired Navy Seal Lieutenant Commander Casey Shepard (Michael Worth) is lured out of retirement to assemble a team of six rag tag renegades to rescue Dr. Burrows. The catch is that no firearms are allowed on the island because the place used to be a weapons testing site for the Russians a chemical fire and wiped out the compound contaminated leaving the place useless. The fallout is methane based but still breathable but the catch is one spark, one gunshot the place will explode.

U.S. Seals 2 (2001) is a B film full of exposition in the dialogue. The script is pretty much by the numbers and predictable which makes the actors (with whom I sense are) not comfortable with the uninspired and stale dialogue. It takes plot elements from Armageddon, Enter the Dragon, and Bruce Lee’s original story line for The Game of Death. There is no character depth or personality trait that gets the viewers emotionally attached to film or the characters. It makes you want to seriously contemplate using the fast forward button to the next action scene.

The only saving grace for U.S. Seals 2 (2001) is Michael Worth’ performance. Worth does his best with the dialogue given him (read- not much of anything), trying to make the expositional dialogue as real as possible. I hope Mr. Worth can use U.S. Seals 2 (2001) as a demo tape to get him into a project that is more deserving of his talent and skills. He shows a lot of promise. We also get a nice sober performance from Marshall Teague who portrays Major Donner.

What got on my nerves about this film was the over-exaggerated sound effects strewn throughout the entire movie. Almost every single movement from hand sign, nod, turn of the head, and jump has to have a canned sound effect attached to it. Even the quick camera pans have “swishes” to them! Now for the real reason to rent this DVD?

THE ACTION
The main attraction to picking up the DVD of U.S. Seals 2 (2001) is the action choreographed by Andy Cheng, a former Jackie Chan Stunt Team member. The action is kinetic Hong Kong style action and well handled especially for a film of this budget. I only have 2 complaints. One small the other one is not so small. In the first fight on the Ratleff’s Island where Casey and his Commandos fight Ratleff’s seemingly endless army. This reminds me of the old kung fu movies where the stuntmen in the background waiting for their cue to attack. The second is that all the action scenes (although well choreographed) have the same pace, rhythm, and no real emotional content. The editing is decent but not as finely tuned as what you would see in a Hong Kong film. But his is not completely the fight choreographer’s fault. Mr. Cheng does a very admirable job considering the handicap of working with an anorexic story line.

On a positive note, all the actors here handle their fight scenes with confidence and poise. Worth exudes an assured and confident presence and is very comfortable in all his action sequences. The film also has ex- Hong Kong action veteran Sophia Crawford (Buffy The Vampire Slayer), martial artists Hakim Alston (Mortal Kombat), Mitchell Gould, Daniel Southworth (Power Rangers) to really solidify and round out the action. Even the fight choreographer Andy Cheng (in blonde hair) has a part here as one of Radliff’s henchmen.

The fights that are really worth getting to are at the end of the film when Mr. Worth fights Mr. Chapa in the bath and when Ms. Kim duels Ms. Crawford and Mr. Cheng. Don’t expect anything too original or groundbreaking and you won’t be disappointed.

THE PRESENTATION
Unfortunately this is a bare bones straight to video DVD, with only the trailer as a bonus. Having seen the main cast and director at a comic book convention promoting the film, there is a genuine love of Hong Kong action films, which is why many of them have decided to take the roles that were offered to them. The Director, Issac Florentine, is also a martial artist and devoted a lot of the shooting schedule time filming the action sequences. By knowing this, a featurette on the making of the action scenes would have raised the stock of this DVD and would have made this worth DVD getting. Considering all the low budget action films out there I can think of a ton of films out there that would be a waste of your time and money. I have seen much worse films with weak story lines and Hong Kong style stunts that are the only reason to watch them. Aside from all the shortcomings I have mentioned, this film does deliver as far as the action is concerned. It’s worth a rental if you have nothing else to see.