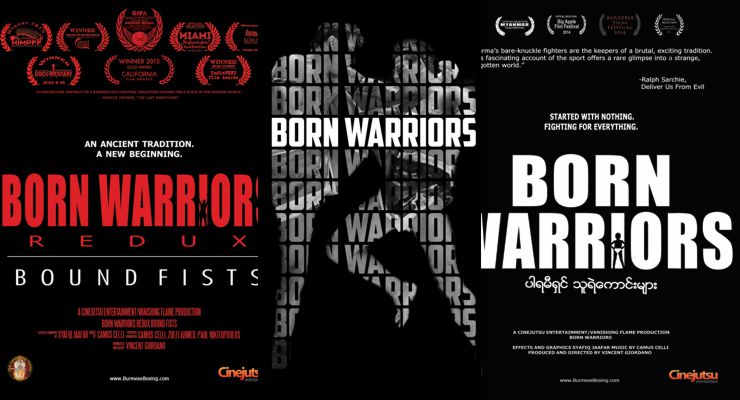 The Born Warriors documentary project has two distinct parts. The first details Lethwei before Burma’s era of Democratic reform. The second part focuses on how the modern sport is evolving and struggling with growth and fierce competition among promoters to control and dominate it. This rare documentary was painstakingly shot entirely in Myanmar over a 15-year period and features unprecedented access to those who fought and shaped Lethwei.

Burmese Lethwei is one of the oldest combat sports practiced in Myanmar. In fact, the Burmese are the last of Southeast Asia’s great bare-knuckle fighters. The Thais, Cambodians and Laotians have given up their bare-knuckle fighting traditions in favor of more modern gloved ring arts such as Muay Thai, Pradal Serey and Muay Lao.

Long ago, at harvest time – especially in the Mon and Kayin states – nightly Lethwei matches would be held as a tribute to the goddess of rice to bless their crops. The festivities would often begin with wrestling and be followed by lengthy bare-knuckle Lethwei bouts. Traditional songs and music would play throughout the night, accompanying each bout. The use of music in martial culture within Burma and across Southeast Asia remains an important component to the presentation and actualization of the arts.

The matches served as popular entertainment, but also as a rite of passage into manhood for young boys in rural villages. Martial tradition was an important component of the spiritual and physical growth of each young man, and the lively festival fights gave him a chance to demonstrate his fighting prowess.

Boys as young as 10 years old would begin the painful process of tattooing their upper thighs. The tattoos would be proudly displayed at the start of a match when a fighter would slap them to ignite their sacred powers. A young man devoid of tattoos would be considered a coward and unlikely to earn a fight in any of the matches.

Read more about Burmese Lethwei: The Tradition of Child Fighters

An Interview with Vincent Giordano Part One and Part Two