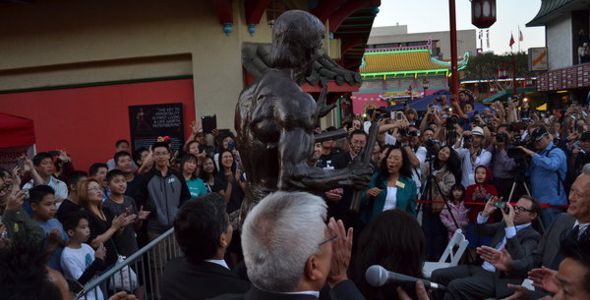 The unveiling caps a five-year effort to bring the Bruce Lee statue to Chinatown, said Shannon Lee, Bruce’s daughter and president of the Bruce Lee Foundation. The statue, created by an artist in Guangzhou, China, is the first such statue of her father in the United States, Shannon Lee said.

Though the Bruce Lee statue will not be permanently installed until business leaders can raise $150,000 to install seating and a concrete plinth, the timing was right for the unveiling, Shannon Lee said. This year is the 40th anniversary of her father’s death, as well Chinatown’s 75th year of existence. And Saturday was the day before Father’s Day.

“Seeing the Bruce Lee statue there in its permanent spot with the night sky of Chinatown … it really struck me,” Shannon Lee said.

Bruce Lee was born in San Francisco’s Chinatown, lived in Oakland and opened several martial arts schools in Seattle’s Chinatown. But he was a fixture in Los Angeles’ Chinatown in the 1960s, opening a school on West College Street and working out at the Alpine Recreation Center. Lee stood out, jogging energetically around a neighborhood where almost no one did, said Shannon Lee.

“It was the best place to be for Chinese food and to speak to people in his own language,” Shannon Lee said.

Actor James Hong used to manage a theater near Lee’s studio and recalled seeing him around the neighborhood. Hong, a prolific actor with more than 400 film and television credits to his name, including “Kung Fu Panda,” said he admired Lee’s patience and perseverance.

“I learned from him to keep a level head,” said Hong between taking pictures with his fans. “That’s why I’m still around after all these years.” 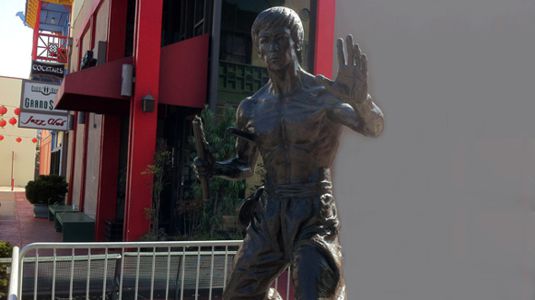 In Los Angeles, Lee took a role as Kato in a television adaptation of “The Green Hornet,” launching a short film career that influenced cinema and pop culture even beyond his death at 32 in 1973. His films inflamed the imagination of a generation of teenagers who grew up seeking black belts and plastering his posters on their bedroom walls.

John Kreng, 44, staked out a spot with his friends hours before the statue’s unveiling, trading Bruce Lee stories and reminiscing. Growing up half-Thai and half-Chinese in an all-white neighborhood in Maryland, Lee’s films were inspiring, Kreng said.

“Here’s this hero who looks like me on the screen,” Kreng said.

Kreng grew up at the end of the Vietnam War and “got beat up a lot,” he said. Then he saw “Way of the Dragon” in theaters and took up martial arts. Lee inspired him to become a stuntman and fight choreographer, Kreng said.

“Seeing him on the screen gave me hope,” said Kreng, who said he has watched “Enter the Dragon” at least 60 times. “I would not be here today if it wasn’t for Bruce Lee.”

Art Camacho, another fight choreographer and stuntman, was similarly inspired by Lee. He grew up in a rough neighborhood in East L.A., saw “The Chinese Connection” in 1972, and promptly took up martial arts classes.

“Bruce Lee changed my whole outlook,” said Camacho, who said he once hired one of Bruce Lee’s costars just to get his autograph on a movie poster.

When the crowds thinned after the unveiling, Kreng and Camacho took up a stance beneath the Bruce Lee statue. They turned sideways, clenched a fist, and assumed expressions somewhere between grimaces and grins.