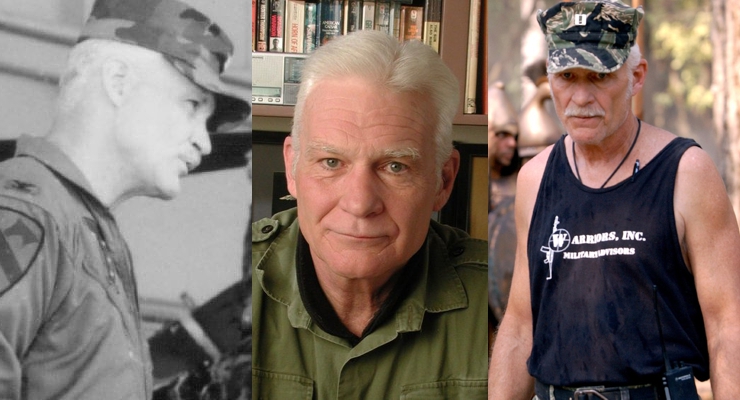 Dale Dye was born on October 8, 1944, in Cape Girardeau, Missouri. He graduated as a cadet officer from Missouri Military Academy, but was unable to attend college due to the lack of funding, so he enlisted in the U.S. Marine Corps in January 1964. He served in Vietnam in 1965 and 1967 through 1970, surviving 31 major combat operations. He came home from Southeast Asia with highly decorated, earning a Bronze Star for valor and three Purple Heart medals for wounds suffered in combat. He spent 13 years as an enlisted Marine, rising to the rank of master sergeant. He was chosen to attend officer candidate school and was appointed a warrant officer in 1976. He later converted his commission and was a captain when he was sent to Beirut with the multinational peacekeeping force in 1982-83. He served in a variety of assignments around the world and along the way managed to graduate with a BA degree in English from the University of Maryland. Dye worked for a year at Soldier of Fortune magazine after his retirement in 1984. He spent time in Central America, reporting and training troops in guerrilla warfare techniques in both El Salvador and Nicaragua before leaving the magazine in 1985 and heading for Hollywood.

Dale Dye brings his military and combat expertise to the entertainment industry.