The original Shaolin Temple (1982) made Jet Li a star, while the remake of Shaolin (2011) stars Andy Lau and Jackie Chan. 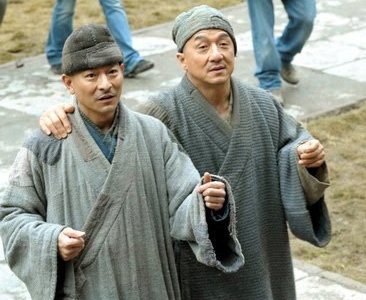 Nearly three decades later, The Shaolin (2011) has received a blockbuster update, with the backing of the famous center of fighting monks of the title and the setting of the 1982 release. Veteran Hong Kong action director Benny Chan has written a new story and cast some of the biggest names in Chinese cinema including Jackie Chan, Andy Lau, Nicholas Tse and Fan Bingbing.

It is the latest screen portrayal of the 1,500-year-old Shaolin Temple in central China, whose kung fu monks have been featured in many TV series and movies. But the 2011 version is only the second to be authorized by temple officials.

Benny Chan, who directed Jackie Chan in some of his recent Hong Kong action thrillers including Who Am I?, ‘New Police Story and Rob-B-Hood, is unabashed about being a crowd-pleaser.

But fans who are expecting an action-packed extravaganza must think twice. Unlike the 1982 original, which featured trademark Shaolin-style moves, Chan’s focus is drama, not kung fu. And Chan says he asked choreographer Corey Yuen to imbue the flashy action sequences the film does have with what he calls the spirit of “Zen fighting,” a composed style that stresses personal development over violence.

The Shaolin (2011) is a revenge story. Li plays a young boy adopted and trained by Shaolin monks who tries to avenge his father’s death. For the 135-minute update, simply called Shaolin, Benny Chan crafted an ambitious story arch. Set in China’s warlord era shortly after the downfall of imperial rule in the early 20th century, Lau plays a local military ruler paranoid about being betrayed by an ally. He devised an assassination plot, only to be double-crossed by his second-in-command (Tse). Lau’s character then seeks refuge in the Shaolin Temple and becomes a monk who repents his terrorizing ways of the past.

“Everyone knows the first movie mainly features the Shaolin-style of kung fu, especially given its star, Jet Li, was a five-time national champion at the time. That’s a big selling point. But I won’t use a martial arts champion as a selling point. Andy Lau is an actor,” Chan said. The veteran Hong Kong leading man is widely respected for his talent as much as his heartthrob looks.

“Do I need to turn Andy Lau into Jet Li? I don’t see the need. I don’t want to,” he said, adding that Lau, a devout Buddhist himself, gave suggestions on how to develop his character.

There is kung fu in the movie, Lau is seen practicing a set of Shaolin-style punches with a group of monks, although Chan says his focus was the philosophy behind the fighting.
“I don’t think very flashy and very powerful moves are a display of Zen fighting … As I understand the spirit of Zen fighting is that you have to understand your ability first, how powerfully you can strike a fist. And then how to break through your limitations. And you will become happier as you practice more,” the director said, pointing to a scene where Lau’s warlord character blissfully practices his moves side-by-side with a young monk on a cold night.

“I tried to portray a state of mind,” he said.

The interplay between the warlord and Jackie Chan’s character is another highlight. Benny Chan said he purposely paired them, Lau’s calculating, Machiavellian military man and Jackie Chan’s role of a happy-go-lucky monk who runs the Shaolin kitchen.

Despite the meditative story, Shaolin (2011) also has the trappings of any major commercial production. A massive explosion scene took a month to shoot and, naturally, couldn’t be set at the real temple. Instead, they splurged 20 million Chinese yuan ($3 million) on a full-sized replica that included a 9.9-meter- (32-feet-) tall Buddha statue.

Benny Chan said the final scene was a painstaking process and a huge technical achievement. He did not use special effects and could only complete a few shots a day.

“It was very memorable. It was very taxing and very dangerous,” he said.

Shaolin (2011) is being released in China and the Philippines on Wednesday; in Australia on Thursday; in Singapore, Malaysia, Thailand and Indonesia on Friday; and in Vietnam on Feb. 18.