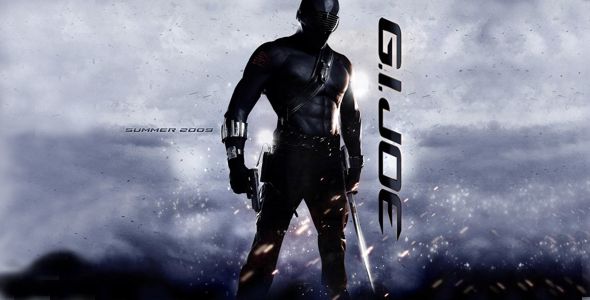 I bring this up because I think it explains why G.I. JOE (the film franchise) has so many explosions. If you saw the first film, G.I. JOE: RISE OF THE COBRA, it was an orgy of explosions. In the interim between blowing up my G.l. Joes and the launch of this film franchise, Hasbro completely revamped G.I. Joe to superhero proportions. The dolls were scaled down in size and accompanied with a long-running cartoon and comic book series. It was one of the most successful rebranding updates in franchise history. I didn’t really keep up with that. After I blew my G.I. Joes up, the new series just didn’t do much for me. However, the post-’80s G.I. Joe, the “Real American Hero” version, did add two elements that warmed my martial heart – femme fatales and ninjas.

RISE OF THE COBRA was a staggering success, grossing over $300 million worldwide. The lead Joe was Channing Tatum, top of the list for actor-who-should’a-got-his-butt-w hupped-by-Cung-Le, in the role of “Duke.” Duke bore G.I. Joe’s signature cheek scar, but he wasn’t the “Joe,” which was just as well as Tatum just didn’t have that grizzled veteran look of the original dolls. RISE OF THE COBRA was a bombastic fantasy action flick with an IRON MAN/CLONE WARS vibe, pure unadulterated mindless entertainment. This wasn’t a film to see great acting. It was a film based on a cartoon based on a plastic doll, so the level of acting was sufficient enough for that. After all, who needs to act around so many explosions? Nor is it a film to think about very hard. As action films go, G.I. JOE contains an incomprehensible level of collateral damage. The death toll of innocent bystanders is astronomical, but that’s never really addressed, as it is comic book fantasy. This is a film to see G.I. Joe, femme fatales, ninjas and lots of explosions.

The new film, G.I. JOE RETALIATION, is presented in glorious 3D. If the thought of watching ninja femme fatales fling shuriken at you from an explosion doesn’t bring a grin to your face, you should just skip this film and go see something else like THE QUARTET. You’ve got to like explosions, really like them, especially the digital kind where there is little carbon-footprint impact beyond the natural gas emitted by the cell of CGI programmers who logged scores of long production nights to deliver these explosions in all of their 3D glory. Unlike the Academy Award-winning 3D film LIFE OF PI, which only tosses some 3D flying fish at you, G.I. JOE blows up in your face, showering you with 3D shrapnel like popcorn in an uncovered pan.

For G.I. JOE RETALIATION, many of RISE OF THE COBRA’s key players reprise their Joe roles, including Tatum, Byung-hun Lee, Jonathan Pryce and Ray Park. Pryce seethes with malice, which is good, as he’s the only villain who isn’t masked (actually he is masked according to the plot, but the mask is Pryce’s face, and with this film the plot only muddles the explosions). In contrast, one of the ninjas can’t keep his mask on. Lee is the white ninja Storm Shadow, a South Korean celebrity and Taekwondo practitioner. Storm Shadow not only unmasks, but takes off his shirt too, to show off his buff physique, which is great for the fangirls of G.I. JOE, and I’m sure there are a few, at least to fill out those female cosplay parts. Ray Park is the black ninja Snake Eyes. Park, a former wushu champion, is renowned for his outstanding martial roles as Darth Maul in STAR WARS and Edgar in HEROES. The ninjas are conveniently color coded: black is good, white is evil and red is just like the red security shirts in STAR TREK, except they are katana-fodder instead of phaser-fodder (there is an exception to this rule which I’ll discuss in paragraph after the next one). Park and Lee add some martial authenticity, but given the frenetic pace and quick-cut editing, their virtuosity isn’t fully showcased. Despite my personal affection for 3D cinema, it tends to make high-velocity fight scenes skitter, so they become hard to watch. This issue is exacerbated by choppy editing, but there are enough explosions to cover for it. 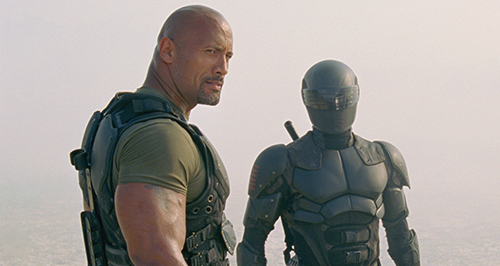 Joining the cast is The Roc…I mean Dwayne Johnson, the most prominent non-Expendable action star around now. Johnson explodes as Roadblock, the new lead Joe. It’s a role he was born to play. After some quick buddy banter with Duke, Roadblock quickly assumes command. Given The Roc… I mean Dwayne Johnson’s background in professional wrestling, he can really sell a fight scene. And that body of his looks like it come right out of a comic book. 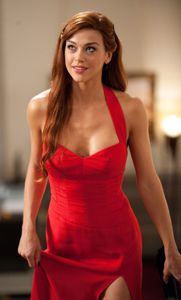 Also joining the cast is Bruce Willis, Adrianne Palicki, Elodie Yung, and the RZA. Willis is Joe, which works to some degree (for accuracy he really needs that cheek scar). But like that original doll, he does have more than one rifle. In fact, he has a whole arsenal of top-shelf firearms at his disposal. This is a film with a lot of gunplay, almost as much as a videogame. Palicki and Yung are the new femme fatales, playing the ninjette Jinx and the soldier’s daughter Jaye. Jinx is that rare breed of femme fatale red ninja like ELEKTRA, sexy and lethal. They override the red-ninja-katana-fodder rule. Both ladies add just the right amount of sexiness to rest your eyes between all of the explosions. And RZA is pitch perfect as the Joe’s version of a black blind Master Po. He has the longest speech, which isn’t saying much. But it works well as he’s the best speaker – or rapper as the case may be. It’s a Kung Fu film redemption for him after his personal project, THE MAN WITH THE IRON FISTS, failed to deliver at the box office.

G.I. Joe has a huge fanbase, so much so that it crosses into cosplay. Even at the screener, more than dozen fans showed up in costume and cheered on the film with hearty shouts of “GO JOE!” RETALIATION is being strategically released just prior to Easter weekend, the weekend of Wondercon, a major national convention of comics and related popular art forms, and a cosplayer extravaganza.

G.I. JOE RETALIATION is one of a seasonal triptych of films that focus on evil forces taking over the White House, an emergency only solved by massive gunfire. G.I. JOE RETALIATION’s premiere is neatly sandwiched between OLYMPUS HAS FALLEN (another North Korea conquers America flick like RED DAWN that was released the week prior) and WHITE HOUSE DOWN (scheduled for summer release and starring Channing Tatum). This begs the question: Is the NRA writing these films? Given the exhibitionistic firearm fetish showcased in G.I. JOE, it’s a slightly disturbing underlying message. But as I said earlier, this isn’t a film to think about very hard. 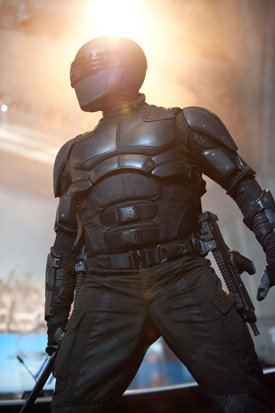 At $300 million, RISE OF THE COBRA already claims the title as the biggest box office film to prominently feature ninjas. G.I. JOE RETALIATION is one of those rare cases where the sequel outshines the initial installment. It’s a superior film on every level, except there’s no IRON MAN angle, which is just as well with the highly-anticipated release of IRON MAN 3 also coming this summer. The centerpiece of the film, teased in the trailer, is a 3D ninja battle while rappelling off a mountain cliff. It’s a spectacular scene, all CGI, which showcases how deep 3D has gone. For stalwart fans of 3D cinema, that scene alone is worth the price of admission. It’s 3D ninja mountain mayhem. What more could you want?

With this sequel, the G.I. JOE franchise looks to be in good shape for another sequel. There is a huge stable, as many as any major comic book franchise, so the amount of new characters and new actors that can be introduced is almost inexhaustible. I just hope that with the next installment, the ninja apprentice Tiger Claw makes the cut.

Up in G.I. Joe Valhalla, my old blown-up dolls are looking down and smiling.