Home Films • TV • Web Tarantino’s Take On Bruce Lee In Once Upon A Time In Hollywood... 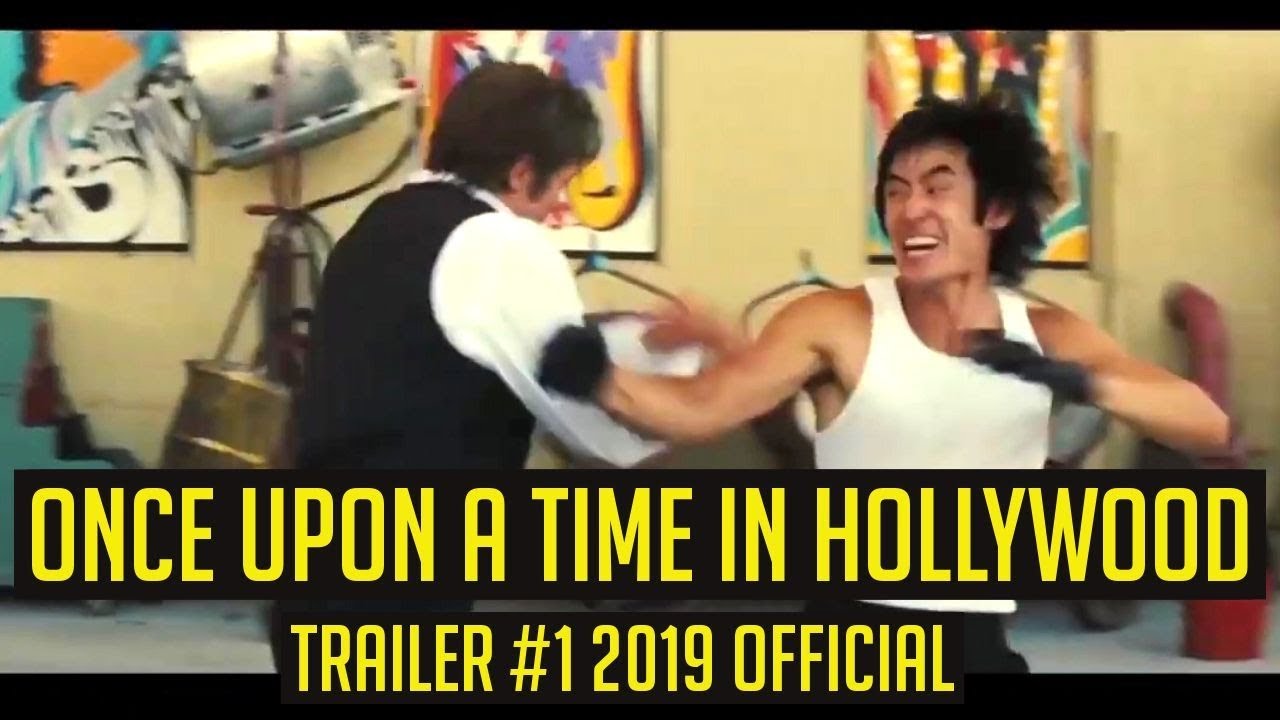 Bruce Lee fans are going to hate Quentin Tarantino’s take on Bruce Lee in Once Upon A time in Hollywood (2019). Jeet Kune Do snowflakes beware – your founder and hero is reduced to a pompous caricature in this movie. Tarantino honored Bruce in both volumes of Kill Bill (2003 & 2004); He dressed Uma Thurman’s lead character ‘the Bride’ in a yellow jacket with black racing stripes on the sleeves, a fitting homage to Bruce’s signature jumpsuit from Game of Death (1978). But now, a decade and a half later, Tarantino uses Bruce as a shallow stepping stone, a small plot device to bolster the character of Cliff Booth (Brad Pitt), in his latest love-letter to vintage Hollywood TV and movie genres. Tarantino’s trademark style of filmmaking still shines brightly in that artsy way that will have movie critics fawning, but Bruce fans will be pissed off. Perhaps that’s part of Tarantino’s strategy – he knows how to parlay scandal into buzz.

Bruce Lee has risen into a singular icon, one that is easy to caricature. Any martial artist worth their salt can do some sort of Bruce Lee impersonation. All it takes is a hearty ‘wataaah!’ and twirling some Nunchuks. Bruce is arguably the most impersonated celebrity on the planet, more so than Elvis. Elvis may have Graceland, but there aren’t many feature-length films starring Elvis imitators. There are more fake Bruce Lee movies than can be easily counted, so many that it’s a genre unto its own called Bruceploitation. 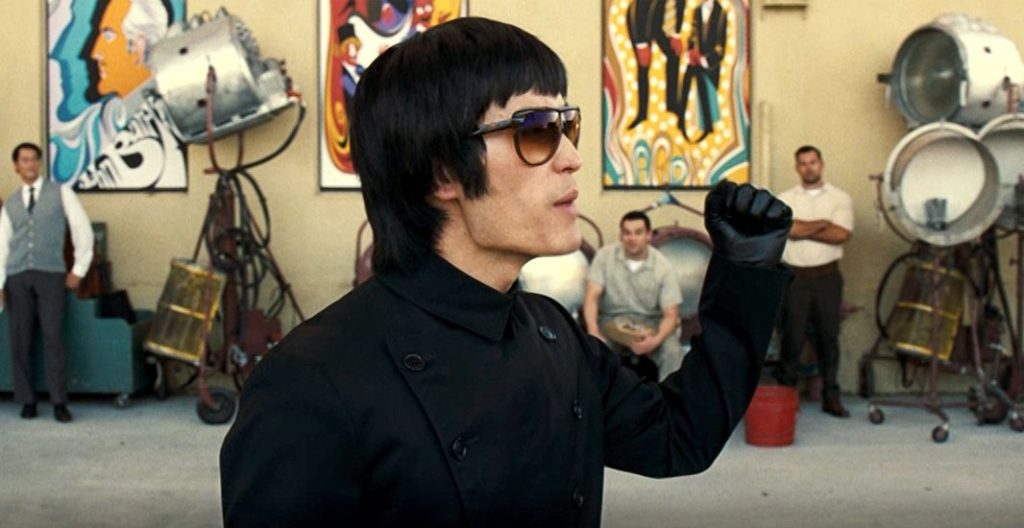 Well Do You, Don’t You Want Me to Make You?

Once Upon A time in Hollywood (2019), Mike Moh steps into the Little Dragon role, and he captures Bruce’s exact manner of articulation with striking panache. Moh is a genuine martial artist, a Taekwondo practitioner that owns and operates his own school. However, he barely gets to show off his skills, despite direction for action veterans Zoë Bell (stunt coordinator) and fight choreographer Robert Alonzo. His short fight scene is completely overshadowed by the film’s ultraviolent finale.

Two decades ago, I had the pleasure of interviewing Bruce Lee’s widow, Linda Lee Cadwell, for our November 2000 issue. In that article, titled ‘Little Dragon’s Lady: Linda Lee Cadwell’s Unique Kungfu Journey Continues with Bruce Lee from Early Days to Now,’ I brought up how so many people think Bruce Lee made hundreds of Kung Fu movies, when in reality, he made less than a half dozen. Linda replied

I’m Coming Down Fast But I’m Miles Above You

Once Upon A time in Hollywood (2019) is a fable based very loosely on the shocking Tate Murders by the Manson Family, which occured on August 8–9, 1969. For those familiar with this grisly history (it has been retold in many books and documentaries), Tarantino offers a date countdown to build suspense. Sharon Tate, played by the ever gorgeous Margot Robbie, and the details are relatively accurate. The Tarantino twist is the addition of Tate’s Cielo Drive neighbors, Rick Dalton (Leonardo DiCaprio) and his wife, along with Dalton’s stuntman Cliff. Both DiCaprio and Pitt deliver stellar performances of the level expected from such superstars. Their journey is funny and revealing as they navigate the rocky terrain of being Hollywood has-beens. This allows Tarantino, who both wrote and directed this film, to comment on old school Hollywood with humor and adoring nostalgia.

And Tarantino hasn’t lost his touch. He can still really move a camera. He has such a keen eye for cinematography as well as an acute ear for period music. Like many of Tarantino’s films, it’s also painfully self aware, almost to the level of how French art film often navel-gazes about the process of filmmaking in a street cafe over coffee and cigarettes. However Tarantino has always poached from grindhouse films. He is a master of appropriation and somehow manages to convert B-grade movie scenes that he has pilfered into art that even Cannes applauds.

The connection between Tate and Bruce was very real. Matthew Polly, author of the most complete biography on Bruce to date, Bruce Lee: A Life, explains.

“Bruce was hired to teach Sharon Tate martial arts for the movie, THE WRECKING CREW (1968). While filming, she invited him over for dinner one night, telling her husband, famed director Roman Polanski, ‘You two will get along like a house on fire.’ They did. Polanski hired Bruce to be his personal Jeet Kune Do instructor. The night of the Manson murders, Jay Sebring, who was also a close personal friend of Bruce’s, went over to visit Tate, while Polanski was out of town. The next morning the police found the bodies of Tate, Sebring, two other house guests, and a pair of horn-rimmed glasses they believed must belong to the killer(s). Polanski, who was crazed with grief, believed the killer(s) must be someone from his inner circle and began investigating the case on his own. He also continued his lessons with Bruce to protect himself. One day during a class at the Paramount gym, Bruce casually mentioned to Roman that he had lost his glasses, which were horn-rimmed. Making an effort to stay calm, Polanski said, ‘I never liked your old pair anyway. Why don’t I drive you to my opticians and buy you a new frame as a gift.’ On the drive over, Polanski’s heart raced as he considered the possibility he was sitting next to his wife’s murderer. When they arrived at the eyeglasses store, Bruce selected new frames and told the clerk his prescription. Polanski breathed a sigh of relief. ‘As I had hoped,’ Polanski later recalled, ‘his prescription bore no resemblance to the lenses found at the scene of the crime.’ Polanski never revealed to Bruce his brief suspicions and the two remained friends for the rest of Lee’s short life.”

I Get to the Bottom and I See You Again

I’m not going to fault Tarantino too much for besmirching the legend that is Bruce Lee. Surely others will whine because whining is the trend. Bruce’s depiction in Once Upon A time in Hollywood (2019). It has already been labeled as a “white male power fantasy” by Twitter users and given the charged climate of racial politics nowadays, I can see those tweets as not completely unfounded. At the same time, we all try to capitalize on Bruce’s fame to some degree. One of the most popular Kung Fu Tai Chi T-shirts is our got game?, which pays homage to that yellow jumpsuit from Game of Death (1978) too. Once I got past how Tarantino had fun at Bruce’s expense (and the scene is short and comes early in the picture), I enjoyed Once Upon A time in Hollywood (2019) for its talented cast, its wicked sense of humor and its still brilliant auteur. This film, like Inglourious Basterds (2009) (2009), is a revisionist fantasy, so we need not be such sticklers for how Bruce is portrayed. This summer, 2019, marks the 50th Anniversary of the Tate Murders, and it’s being marked by multiple Manson movies including The Haunting of Sharon Tate (2019), starring Hiliary Duff, Grace Von Dien and Kate Bosworth respectively playing Sharon Tate. None of those films include Bruce Lee, so at the very least, Tarantino remembered Sharon’s Sifu.

I’m sure Linda Lee Cadwell won’t be happy with it, but I think she said it best in our millennial interview. “But he [Bruce] survived all of that. People have, over the years, come to understand that he was the real article. He was the genuine martial arts master. He wasn’t just trick camera angles and that kind of thing. He really did know what he was doing, not only physically, but there was a much greater depth to him in his overall knowledge. People have come to learn that about him, so they are not so easily fooled anymore.”