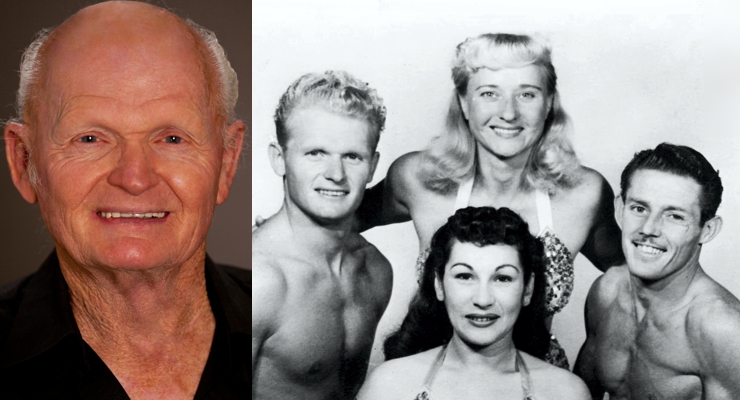 “Since I became a Christian, I tell my friends in the business that I was mentored by the world’s greatest stuntman who specialized in ‘high work’ and that was Jesus Christ who ‘stood in’ for everybody up on the cross!” -Bob Jerkes

As the quiet figure of God’s Stuntman, Bob Yerkes stood close to the Red Carpet at the 21st Annual Movieguide® Faith & Values Awards Gala and Report to the Entertainment Industry, held Friday, February 15, 2013 at the Universal Hilton Hotel in Hollywood, you would never have guessed that this man had been defying death with his extraordinary stunts for about 66 years.

So amazingly, as none of the other journalists standing by me realized who he was, I grabbed him for an interview and asked him first of all how his name is pronounced. He laughed and said, “Yerkes; it rhymes with circus!”

Born Brayton Walter Yerkes on February 11, 1932, this legendary American stuntman began a life of acrobatics in the circus as a teenager and went on to work as a stuntman in such films as “Back to the Future,” “Star Wars: Episode VI – Return of the Jedi,” and “Hook.”

“Then after I time, I came back to the Los Angeles area, and did stunt work in my first film. It was with Elizabeth Taylor in a movie called “Julia Misbehaves,” and she was fifteen too, though I was a week and a half older than her.” [The 1948 film also starred Greer Carson, Walter Pidgeon and Peter Lawford, who later went onto become a member of the “Rat Pack” and brother-in-law to U.S. President, John F. Kennedy.]

Yerkes revealed that he had doubled for such stars as Paul Newman, Robert Duval, and Arnold Schwarzenegger just to name a few.

He said that probably one of the most famous stunts he performed was when he doubled for Christopher Lloyd up on the clock tower in “Back To The Future” [as] he slid to the ground.

“Then I doubled for Della Reese getting shot out of a cannon on ‘Touched By An Angel,'” he laughed. “I’d do stunt work in the winter and then out with the circus in the summer.”

For ten years he taught a seemingly endless number of celebrities circus acts for the “Circus of the Stars” television specials in the 1980’s. Recently, Bob worked in the remake of the film, “Poseidon Adventure.”

This modest man is actually one of the premier stuntman in the world. He has received the World Acrobatics Society’s Lifetime Achievement Award – Gallery of Acrobatic Legends, and is a member of the Stuntmen’s Association of Motion Pictures.

But it is his faith in Jesus Christ that he wanted most to talk about so I asked him where and when he became a Born-Again Believer and he replied, “It was at the beginning of 1957 and I was with the Ringling Brothers circus trapeze act and my dad or mom had never mentioned God to me and I didn’t learn about God at church,” he told me.

“But with time on my hand, I decided to purchase a Bible and go through it and list all of the contradictions I found in it. It took me a year and four months to get through it and when I finished it I said that this could not have been written by man unless they were God-inspired. It just proved itself to me and all through it God said, ‘Put this to the test? Is this man’s word or Mine?’ And as I read it I knew that it was all true and it was God’s Word.”

Yerkes added, “Everything we’re seeing happening today in the world is in there; not vague prophesies, but detailed. So it’s an amazing book and now that I am a Believer, my ministry is in entertainment as that’s the business where the Lord put me.

“I remember that Roy Rogers and Dale Evans started a group here in the film industry and it was called The King’s Stage Christian Actors which I would attend. So after this, I started a Bible study on the Ringlings show and I called it The King’s Ring. Since then, I have been involved with many different Christian groups like Dr. Ted Baehr’s MOVIEGUIDE Gala. When he then lived in Atlanta, he used to come out here to get this started and he’d stay on my boat in Marina Del Rey.”

He smiled and said, “Since I became a Christian, I tell my friends in the business that I was mentored by the world’s greatest stuntman who specialized in ‘high work’ and that was Jesus Christ who ‘stood in’ for everybody up on the cross!”

Since Bob Yerkes first became involved in Hollywood, I suggested that there had been big changes in the movie business with so many more family-friendly films being made.

“I like what Ted Baehr is doing, as it’s really showing how the good family films are desired by most people here in America, and they also make the most money,” he said. “As Believers, we’re told to ‘hold back’ the evil things that are going to take place in the world and we should do this until we’re taken out of this world by what is called ‘the rapture of the Church’—and that’s what I’m looking forward to.”

“But at the moment, I just keep bouncing on the trampoline, but darn it, I keep coming down again.”