Written by John Corcoran, American Samurai (1992) is a Bloodsport style martial arts action film directed by Sam Firstenberg. It stars David Bradley, Mark Dacascos, and Valarie Trapp and is produced by Cannon Films. The movie was filmed in Turkey and released in the United States in 1992. American Samurai (1992) was the first major role for martial arts and actor Mark Dacascos. 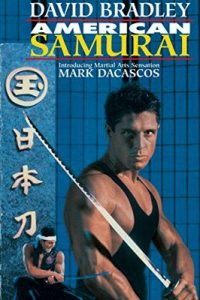 In American Samurai (1992) a plane crashes in the Japanese mountains and only baby Andrew survives. The baby is adopted by a samurai master and Andrew (David Bradley), along with the samurai’s son, Kenjiro (Mark Dacascos), are raised training in the warrior’s way. Andrew excels in his training and soon Andrews skills surpass those of his stepbrother. Kenjiro is jealous and joins the Yakuza, taking the Yakuza oath and forsaking the moral values of the Samurai code he was raised to live. He leaves his father’s home, swearing to take revenge on his Andrew some day. Ten years later, Andrew is working in L.A. as a journalist. He and a female photographer, Janet Ward (Valarie Trapp), track down an opium-smuggling operation in Turkey. When the the drug dealers kidnapped Janet, Andrew is forced to enter a deadly martial-arts tournament ruled by illegal gamblers whose greatest champion is Andrew’s stepbrother, the lethal Kenjiro.