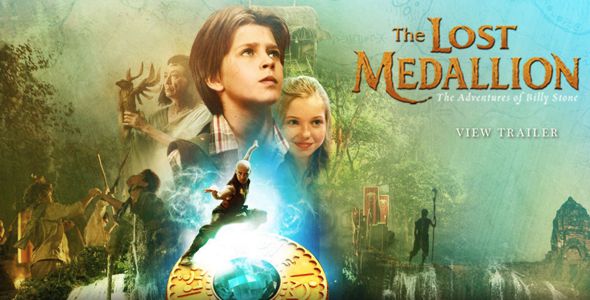 This is an excellent adventure movie for families!!!

The Lost Medallion: The Adventures of Billy Stone is a feature movie which opened in theaters March 1, 2013. This faith-based, family, action/adventure film will thrill children and tweens, six through fourteen, their parents and grandparents. When Daniel Anderson (Alex Kendrick, Courageous, Fireproof and Facing the Giants) visits a foster home to drop off some donations he is quickly roped into telling the kids a story.

The story he tells is about Billy Stone and Allie, two teen-age-friends, who uncover a long- lost-medallion and then accidentally wish themselves back in time. Will the experience give them a new understanding of who they are and what their lives really mean? Daniel finishes his story to the foster children with the Truth about their tremendous value to God, who loves them and created them. The story not only changes the children, but is bound to change all who see the movie.