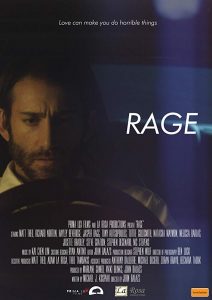 RAGE takes place after a violent home invasion leaves Noah (Matthew Theodorou) in a coma and his wife, Madeline, (Hayley Beveridge) deeply traumatized. A mild-mannered husband, Noah awakens to find that one of the attackers is still on the loose. The couple try to move on with their lives, but when Madeline nearly-despondent spots the attacker, this opens up a twisted tale of brutal revenge where nothing is what it seems. Along the way, a scarred and seasoned Detective John Bennett (Richard Norton) fights his own inner demons whilst trying to solve the crime.