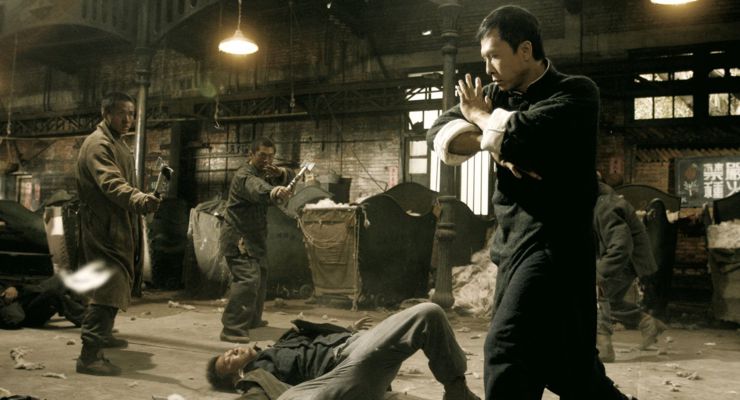 A fine cinematic rendition of wing chun and its pre-eminent practitioner, February 23, 2009

Modern martial arts films fall into two categories: the fantastical wuxia variety, with its flying swordsmen fighting off whole battalions while emitting chi blasts with their palms, and the more realistic variant that seeks to depict an actual human fighting at the peak of human potential. Ip Man is the latter, and quite probably the finest example of this type of kung fu movie.

Though Ip Man’s life story is altered for dramatic effect and the fight scenes are cinematized, it is about as fine an example of wing chun applied to real life as has been seen on screen. Action choreographer Sammo Hung, who directed the previous three best screen renditions of wing chun (Prodigal Son, Warriors Two, and the Wing Chun TV/telenovella series repackaged as a feature length film Twin Dragons) shows that he has continued to deepen his understanding of wing chun as a real fighting art and how to combine it with the requirements of an exciting movie fight. The telenovella provides more of an explanation of wing chun strategy and mindset, but Ip Man undoubtedly flourishes due to the excellent (and superior) physical skills of its star.

Certain events in the film purportedly have a basis in reality: Ip’s challenge fight with a Northern stylist, a confrontation with a gun-welding police officer, and a request by the Japanese military to instruct Japanese troops. However, the end, which sees Ip escaping to Hong Kong, implies that Ip was fleeing the Japanese. In fact, Ip fled to Hong Kong to avoid the wrath of the victorious Communists: as a former member of the privileged class who had demonstrated some Nationalist sympathies, he rightly realized that he would have been an obvious target for “re-education” and imprisonment. It is obvious that this fact was downplayed to make the movie more palatable for the mainland Chinese market.

One amusing scene in the movie features Ip, the great master, nevertheless helpless before the wrath of his wife, who vents her frustration at his devotion to training and sparring. Thousands, if not millions, of male wing chun students have found themselves in the same situation with their wives and girlfriends, so it is comforting to see that even Ip Man could not find a way out of this quandary.