Home Who's Who Jean-Claude Van Damme: Behind the Public Image 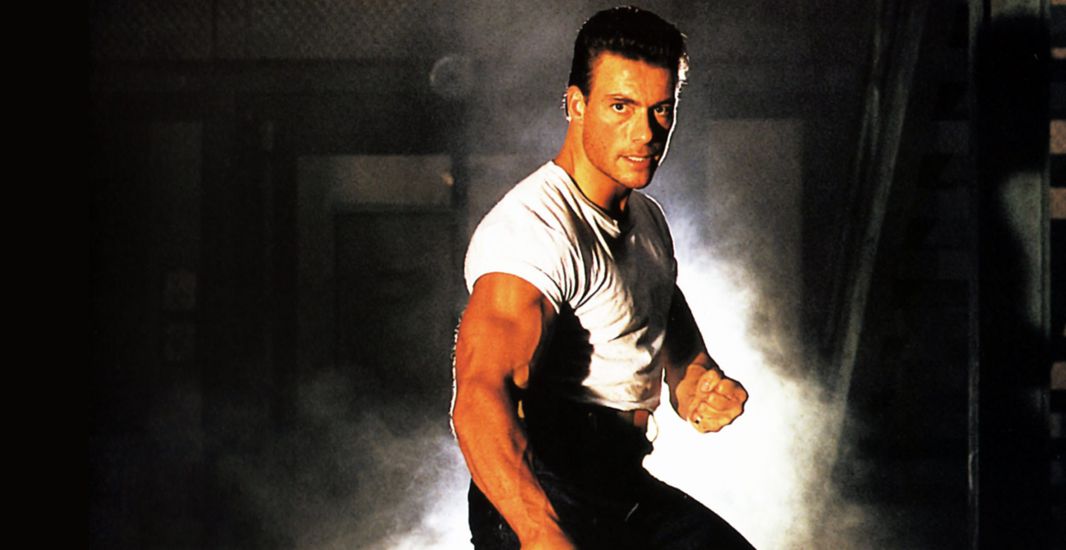 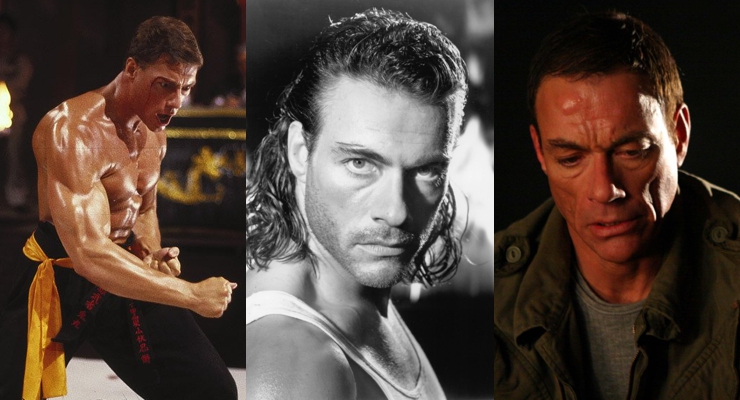 This article and interview will let you see the two sides of Jean-Claude Van Damme, one of which few, if any, have ever seen. In 1980 in Brussels, Belgium, Mike Anderson’s organization put on an event that featured American Dan Macaruso vs. French karate legend Dominique Valera. Valera was the heavy favorite, and the crowd was disappointed with the outcome when the American won an easy victory over the Frenchman Valera.Van Damme fought a tough competitor named Verlugels, according to Geert Lemmons who was the head of the Belgium team at the time. But I guess he wasn’t that tough, as the fight had to be stopped by the referee in the second round as Van Damme hit him with everything but the kitchen sink. 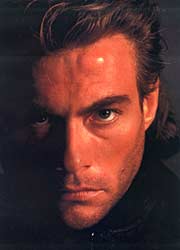 When we asked Jean-Claude about the fight and why he has never talked much about it, he said, “well, that was a long time ago and I am not sure if anyone really cares about that stuff nowadays.” He went on to say, “I have never been one to live on my past accomplishments like this fight, or on my hit films like Kickboxer or Bloodsport. I am more interested in what is happening right now, and I think my fans think the same way.”

“One of the things that I really admire about the martial arts is that real martial artists are very humble, especially the ones that are really good. I try to be like that in my martial arts, but in my movie career I can not be like that or I will get lost in the crowd,” said Jean-Claude.

“When I was a teenager my karate teacher Claude Goetz (the European karate pioneer who studied with Tsutomu Oshima, a disciple of Gichin Funakoshi) would teach us that martial artists always live in the now, not in the past or in the future. He would say that there is nothing I can do about the past, and the future is just that — the future. Therefore, I must live in the now, as this is the only thing I can control. I think that these early lessons come to the surface for me all the time,” he said.

In our research of Van Damme the fighter, we talked to Mike Anders (the famous American

Taekwondo stylist and karate event promoter, who won the All European Karate Championship four times and founded Professional Karate Magazine in 1972) and Geert Lemmens (a Belgian Shotokan teacher and European karate champion). They both agreed that although Jean Claude was not a big name in full contact or semi contact fighting, he was one of the up and coming fighters of the day. If he hadn’t chosen to take his martial arts to Hollywood, who knows how big a name he would have become. “He sure had great kicks, I remember,” said Lemmens. “He had this terrific jumping spin kick that he used in his fights. He even uses it in his movies today.”

Wanting to know more about his training as a youth, I talked to his parents, a lovely couple who were and are totally supportive of their son. His father, Eugene, said that Jean-Claude was fanatical right from the beginning. As a teenager he would spend three or four hours a day training in the attic dojo, and then he would come down and practice his other fascinations like the piano. His mother, Elaine, said that when Jean-Claude was a teenager, his piano teacher even came to the house and wanted him to become a concert pianist, but his father said no, he will become a martial artist. The rest, I guess, is history.

Jean-Claude is also a lover of animals, and when he does something, he is fanatical about it. Some people collect old martial arts magazines, but not Jean-Claude. He collects stray dogs. He has three mutts — and I mean mutts — that he collected from the streets around the world.

His latest is a cross between a shepherd and who knows what. His name is AJAX, named after a Hotel in Sofia Bulgaria. While making the movie “DeRailed,” Jean-Claude and his son were in a taxi, and they saw a stray dog get hit and killed by another car. They were both shaken up. About a mile further down the road, another dog ran out in front of the taxi. Jean-Claude ordered the taxi to stop, and he ran out and saved the stray dog doomed for the same fate as the other mutt. Jean-Claude brought the dog into his taxi and back to Hollywood with him and his son. Perhaps the old saying, “you lucky dog” applies to this mutt. No matter what Jean Claude is, he is much more than a fighter. He sure can kick hard, but he also loves dogs and animals.

When I got the chance to talk to him, though, I focused on his karate, and what is new in his Hollywood career.

DW: Jean-Claude, when you were training in Shotokan karate back in Brussels, what did your training consist of? Was it like everyone else’s, doing the repetition of basics, etc., in classes?

JCVD: Yes, my training was just like everyone else’s. The only difference was that my training did not stop when the class was over. I would go home and kick the heavy bag my father put up for me in the attic. It was like my own home dojo, and I would spend hours up there training and stretching and kicking the heavy bag just like thousands of other kids do today.

DW: Did you practice kata? Did you ever compete in kata contests? 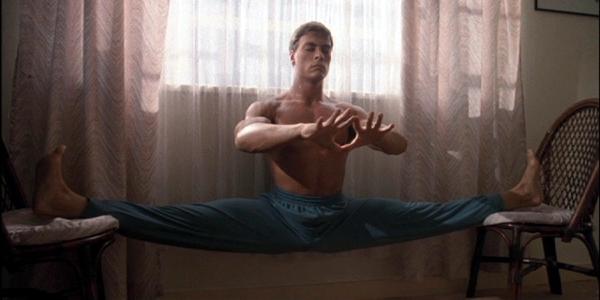 JCVD: Yes, of course I practiced my kata, and I even competed in kata a couple of times. But my heart was in fighting. I wanted to be able to kick like Bill Wallace, fight like Chuck Norris and Joe Lewis, and act like Bruce Lee. So I would practice all of this constantly. If I wasn’t training karate or lifting weights, I was practicing the piano. These were my passions as a teenager. In fact, you might say I was obsessed with these activities. I just couldn’t get enough of them.

DW: Is that passion still there for the martial arts and training?

JCVD: Yes, it is still there. In fact, I train every day, still working on my overall conditioning, cardio, weights, and stretching. I train at least an hour a day in this type of training. But just before I go into a film, I up this time to about two or three hours a day, so I peak just as I am about to shoot the film.

Now I am also enjoying working out with my son Christopher. In fact, I take him to the gym near our house. I am teaching him the basics of bodybuilding — you know, making sure he has good form and technique the same as in his karate training. This is something that my parents instilled in me as a youngster quality, not quantity. I have always insisted on this in everything I do, whether it is making a film or doing a roundhouse kick. I am very intense and very demanding when it comes to quality. There is no way to replace this; it is a must.

DW: Since you were a champion in the ring, what can you offer our readers about training and getting better?

JCVD: When I had my dojo in Brussels and was teaching classes before moving to Hollywood, I would always insist on giving 100% effort all the time at whatever I was doing. In fact, when you and I were watching that old Bruce Lee footage you have, I couldn’t help but think that Bruce Lee must have had the same attitude. He was so fast, so technically excellent as a martial artist and in such great shape. He was really an excellent martial artist.

DW: What is coming in your movie career? How is “The Monk” coming along?

JCVD: Well, the movie “The Monk” has been shelved at present, as it was a poor take off on “Rush Hour II.” It is being re-written at present. The director of the film, Ringo Lam, is now going to be directing “The Shu,” which is a prison film. I am looking forward to this because as Ringo said, “it’s time for a new Van Damme. No more roundhouse kicks and no more flying side kicks.” In this film we have cast some of the very best grapplers and cage fighters, so you will see loads of grappling, take downs and chokes — a lot more than ever before.

JCVD: Yes, I am going to have a great web site, so please check it out — jcvd-online.com. There will finally be a place my fans can go to join our official fan club and get up to the minute information on what I am doing — all the gossip, all the latest news — and I will also be offering suggestions on training, nutrition and lots more.

DW: Thanks very much, Jean-Claude, for taking the time to sit down and talk karate. I look forward to our next interview.

JCVD: You’re most welcome, Don, and I too look forward to our next interview. It gives me a chance to bring back all the fond memories I have of my karate training days. Now I am not sure if I will go do some weights, play the piano or maybe I will go play with Ajax.