Ladies of Assassin X aka The Chemist: We found the ladies of the Assassin X intriguing so we asked Nina Bergman, who played Trinidad, and Stephanie Gerard, who played Gabriela Dresden, a few questions.

Tell us about your childhood and how it prepared you to become both a singer and an actress.

I had a great childhood, very blessed from a Mexican mom and a french father. I was born in Mexico, raised in Canada, and I’ve lived in Mexico, France, Switzerland and now Los Angeles.
I went to school like a normal child but my mom discovered that I loved singing, dancing and acting, so complimentary to my school I started taking in the afternoons, ballet, singing lessons, theater. I have a bachelors in Political Science and studied languages while living in Europe. When you have the arts in your blood it’s really hard to escape, I studied Dramatic Arts in one of the best schools in Mexico, City for 3 years and started acting in plays, soap operas and commercials for Televise Network. And I couldn’t leave my singing aside and released 9 albums with no record label but amazing distribution in Mexico and Latin America. So I toured and did everything I always wanted to do, but when I started wanting more I knew it was time to move on and try crossing over into Hollywood. I prepared with classes, training, courses, and overall studying nonstop for years to be ready if I decided to continue with this amazing career.

How did you hear about the audition for Assassin X aka The Chemist and what made you decide to audition for the role?

The producer Al Bravo and I were working on a different project, and I actually didn’t know about Assassin X, they had been auditioning for a while but couldn’t find Gabriela, I guess it was meant to be mine! 2 weeks before they started shooting, Al calls me and tells me that he thinks I would be perfect for a role of this new movie that he’s producing, that I should come and meet Art macho the director, I said sure! When? And he said in an hour!! Haha so I got ready and went to the audition. I had a cold read of Gabriela’s last scene and a quick meeting with Art. Art told me right there that he would love for me to attend the call back and to read the whole script. Two days later I went to the call back, beyond prepared, obviously with all my lines memorized and told him that I loved the script, because Gabriela has those two sides to her and I thought I could definitely fit in. A day later they called to give me the news that I would be playing Gabriela in The Chemist.

Tell us about the audition process you went through for the role of Gabriela Dresden? Did you do anything unique to show you would be perfect for the role?

The first audition I didn’t know anything about the role, but the last scene is very intense and I’m very dramatic hahaha… So that cold read gave me the chance to go in for a call back… I had already read the whole script and memorized my lines for the final scene. Gabriela is a lot like me in the beginning of the film, very bubbly, smiley. But she also has this dark side, and that’s where all my years of studying dramatic art kick in. This duality that the character has was exactly what they needed in a person in order to play her. Gabriela has the perfect amount of innocence to make the others believe in her, but you can also tell she’s got a secret agenda. 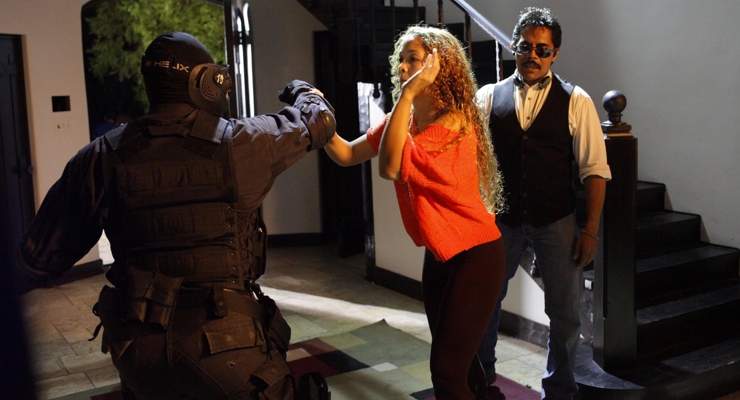 What are your thoughts on Gabriela’s personality? What are Gabriela’s strengths? Weaknesses? Is she good or bad . . .

As an actress you can’t ever judge your character as good or bad. We are playing a character that has strengths and weaknesses like a normal person. Gabriela’s world becomes a world of secrets, secret agendas, betrayal, and full of lies, but she doesn’t really know the truth. She is very smart and a quick thinker. She can make herself disappear in a room full of people or make herself the center of attention. It’s a switch she turns on and off. She’s observant and notices everything and knows how to control the situations around her.

What are your thoughts on Trinidad’s personality? What are Trinidad’s strengths? Weaknesses? Is she good or bad . . .

With Trinidad its the same thing, I can’t say she’s bad or good. I can say she’s a little crazy, hahaha!! but I don’t know what she went through in life to make her who she is. Her weakness is she thinks she’s this badass, and tries to fit into a world full of trained assassins, so she ends up dead. She definitely puts it all out there. She’s very strong and commits 100%.

I can relate to her in the bubbly, smiley, flirty side. I’m also observant, we both know other languages than just English, hehe. Her relationship with her parents is very different from the relationship I have with mine. She has a dark side that I don’t have. We have similarities and yet in other ways we are total opposites. That’s the beauty of acting, loving and appreciating your character, understanding why she is the way she is, and doing your best to make her shine through you. 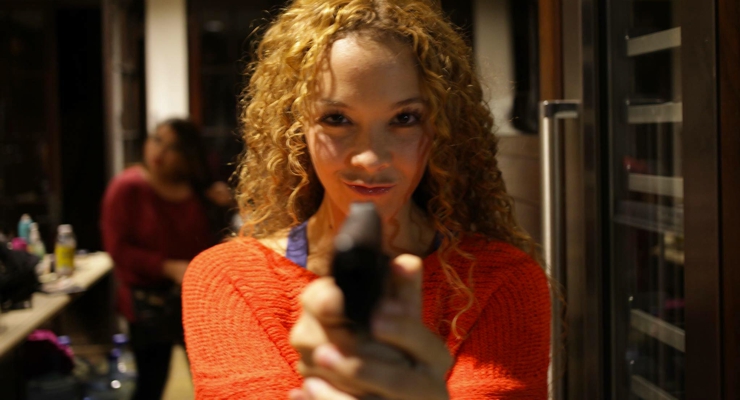 What was your biggest challenge in playing the role of Gabriela?

Honestly, the martial arts was my biggest challenge. This is my first action movie and I was 100% committed to the martial arts training, Art Camacho trained me for 1 week for over 12 hours a day and we continued training before our shoots early in the morning, I did not have a break until we finished shooting the movie! I didn’t know how it would look, but I was definitely in the best hands, so the experience was amazing. Another challenge was the back naked scene, walking into the shower, even though is really quick and classy, it’s the first time I’ve done this… But everyone on the set made me feel so comfortable and great! Our amazing DP Carmen Cabana helped me a lot to make me feel at home.

Without giving away the story, what’s your favorite line of dialogue from The Chemist and why?

When Gabriela gets back to the safe house with Ronus after visiting the coroners office, she says: “My dad died a month ago. I just wanted to see what happened to him.” There is a lot hidden in  Gabriela’s words and this sets the stage for the rest of the movie.

Did playing the role of Gabriela or the story of Assassin X have an impact on your life in a personally way? If so, how?

As an actress every character I play has an impact on me. I learn from every single character I play. Acting makes you grow and changes you. You get experiences and live through them. Playing Gabriela made me discover new things in me. I loaned my body to her and she left scars, tears, joy and a lot more martial arts skills!!!

Did your practice of yoga help you with your fight scenes on the set of Assassin X? If so how?

Definitely! Yoga helped a lot! Yoga has made me strong and flexible. I had never done martial arts before, and even better than the yoga, was my ballet and dancing experience, because, at the end of the day, a choreographed fight is still choreography, learning the movements, flowing, rhythm, coordination with your body and the opponents body. It’s different, but having skills in dance definitely helped me with syncing the martial arts techniques together into a fight scene.

What was the most difficult part of making your fight scenes realistic?

It is difficult because in film combat we are acting and we are really not punching or hitting the other person. You have to hit hard and then stop your movement, or react on time with your face and body, to the other person’s strikes, to make it look real. You have to incorporate everything perfectly. You also have to be aware of yourself and those around you, because it’s body against body and we don’t want anyone hurt by becoming distracted. 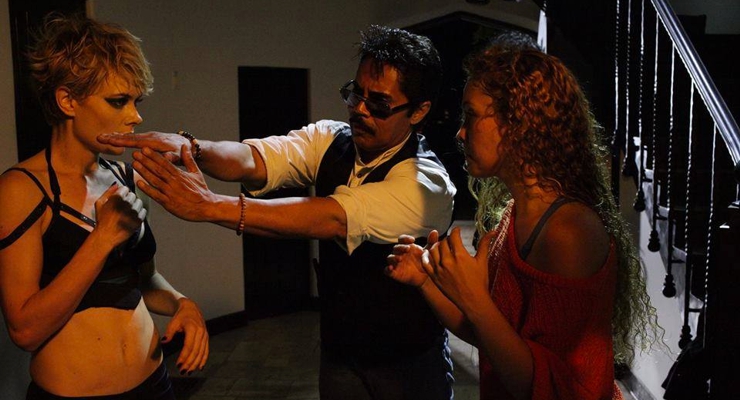 Was there a point when you were exhausted but still had to film. How did the director and those around you help you to find the energy to keep going.

Honestly, I helped a lot to bring the energy up in general on the set!! I could keep going for hours and hours, from the 20 days we shot, 18 days were actually night shoots, so we were on set from 6 pm till 6 am. I have a lot of energy (yoga has helped a lot), and even when everyone was tired I was always smiling and jumping and excited cause I LOVE what I do, no matter what. It’s not a sacrifice, it’s a pleasure and to have the chance to do what I love to do is a blessing. Art Camacho and Carmen were great too in keeping the energy up!

Can you share about some of the challenges in filming Action X? Any behind-the-scenes anecdotes you can share?

There was one night where Nina, (Trinidad), and I shot our biggest fight scene. It was 12 hours of fighting non stop and it was great to have someone else as committed as I was playing Trinidad.
Nobody could believe how bruised and exhausted we were, but we still had the best attitudes and we continued having fun for hours, focused, but also making jokes between takes, and we cared about each other so much! Another night, we were waiting for the sunset to happen, so while we waited Art choreographed some fights with amazing martial artists and we shot 4 fights before the night came. This gave us extra material in case he needed it.

I have a lot of facts that people don’t know about me! I have a bachelors degree in Political Science, I speak 5 languages, my favorite language is German. I am a big fan of Clint Eastwood and I’m completely in love with Leonardo DiCaprio. I’m a vegan and an animal lover, and I have an association against animal cruelty.