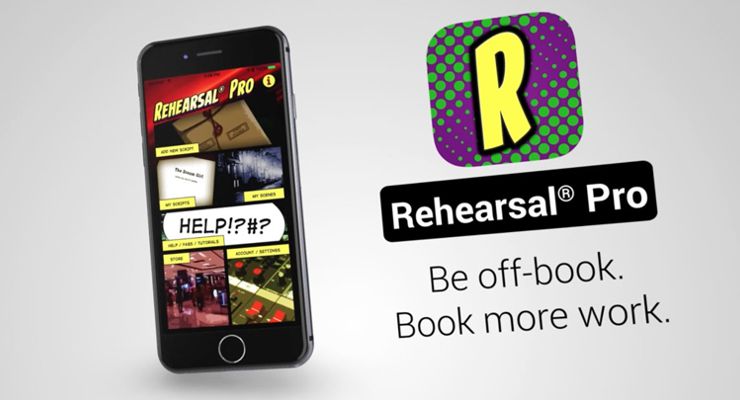 Want to learn your lines? Want to be off-book, and book more work? Rehearsal® Pro is the app for that. Its predecessor, Rehearsal® 2, featured in the New York Times, Fast Company, LA Magazine and BACKSTAGE, became the entertainment industry standard for cast and crew to organize their scripts for auditions and working on set. Battle tested in Hollywood and around the world by professional actors and acting students.

“I love this app! Rehearsal® lets me learn my lines in the car while I drive to work. It already saved my butt when I was thrown a major new dialogue scene 45 minutes before we started shooting it. I plugged the new scene into Rehearsal and I was off book by the time I got out of the make up chair.” -Clark Gregg (Marvel’s Agents of SHIELD, Iron Man, Iron Man 2, Desperate Housewives, New Adventures of Old Christine)

“I am very pleased with the results of using Rehearsal® so far. It is a powerful tool in preparing for auditions, or for days of work, especially when I am pressed for time. It is easy to use and I have no doubt that as it evolves, it will be a part of my work process for a long time.” -John Carroll Lynch (Shutter Island, Dexter, The Drew Carey Show, Body of Proof)

Rehearsal® Pro is
– extremely easy to use, solid and reliable
– intuitive: it reminds you of what you do with physical scripts
– usable with any current iOS device, and syncs script markup between all of them
– costs one low price for unlimited usage

For actors from every walk of life and all areas of accomplishment:
– works with short audition sides, to feature length scripts
– easily handles physical scripts by bursting and scanning to PDF
– for every actor at any skill level, student, amateur or professional
– for every actor in every arena, from community theater, commercial, industrial, stage, web, VO, television, and film
– get help with on-board demo videos that show you how to do nearly everything

Manage your scripts easily:
– Sync scripts between your devices
– Manage scanned-in scripts for theater productions
– Rotate, crop, collate and tint your pages
– add physical scripts by snapping pictures of pages
– create bookmarks and easily jump to a particular page
– work with the same PDF and Word files you get on your computer
– easily break down your script into your scenes
– reading your script is a snap – just flick and scroll

Learn your lines quickly:
– highlight your lines and your scene partners’ lines in vibrant colors
– record your lines and play them back, watching the script scroll by like a teleprompter
– quickly fast forward or rewind to pick up lines simply
– record unlimited versions of scenes, exploring your character and creating new reads
– automatically repeat your scene over and over until you know your lines cold
– group multi-scene auditions into one repeating scene
– pause recording and playback
– play peekaboo to memorize – reveal your lines in blackout mode
– quickly add beat marks to longer passages

Explore your characters
– easily create and review comments: text, audio, photo or video
– record different takes on lines, different looks for characters
– have all your choices at your fingertips for instant review

Everyone on the production team can use Rehearsal® Pro
– location scouts can create quick and easy reports
– makeup, wardrobe, set dressers: keep track of continuity and looks from scene to scene
– directors and cinematographers: plan shots and create on-the-fly storyboards

Rehearsal® Pro was created by a working actor just like you, David H. Lawrence XVII, best known as the creepy Eric Doyle, the Puppetmaster on NBC’s Heroes.