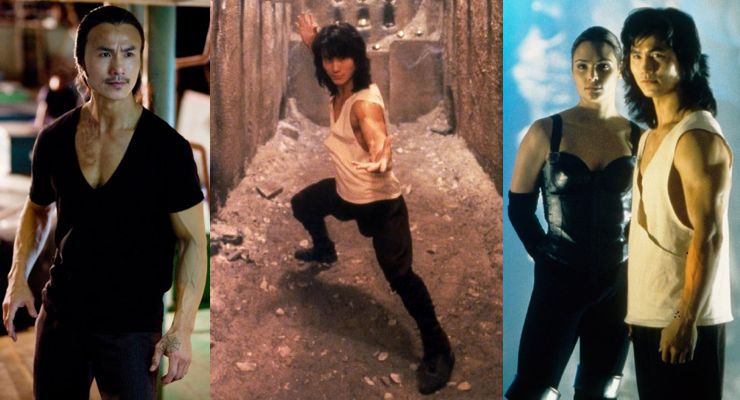 Robin Shou, was born on July 17, 1960 in Shanghai. He is the fourth child of a Shanghai tailor and homemaker. His family moved to the United States in 1971, when Robin was 10 years old.

Robin Shou began training in Kenpo Karate martial arts when he was 19 years old. He attended classes while he was attending California State University. He soon realized that Karate wasn’t his art and he dropped out of training. A year and a half later he was watching a demonstration by a group of Wu Shu practitioners from Beijing. He said “This is Chinese!” and he was inspired to begin training in this discipline. In 1981, just before starting his senior year at California State University, he sold his car and used the money to spend a quarter of the year studying Wu Shu in Nanjing, China.

Robin Shou was an International Forms Champion in 1982 and 1983 and he won several gold and silver medals at prestigious competitions in China. He was also a traditional forms Grand Champion in California.

Robin returned to California State University graduating with his B.S. in Civil Engineering. He spent a year and a half working in this field but found computer and electronics boring. He felt he had to finish school, get a job, get married etc., because it was expected of him. He wasn’t happy and it was the study of martial arts that kept him going. He decided to travel to Hong Kong on a vacation hoping to sort his life out while there. Shortly after his arrival, he was offered a chance to do stunt work in a movie and this job lead to more jobs and for his first two years in Hong Kong he played small parts in action films.

Robin Shou got his first real dramatic role in the film Forbidden Nights (1990), where he played opposite Melissa Gilbert. Though only a TV film, this was his first American debut and a step toward Hollywood. Robin went back to Hong Kong and continued making movies there, but by this time, he was becoming more careful about the roles he took and when he didn’t get offers to do the kind of acting roles he wanted, he returned to Los Angeles to start an import/export business in 1994.

Robin soon got a call from his agent ranting about the perfect role in a movie called Mortal Kombat (1995). Robin wasn’t interested, assuming he would be playing a villain who gets killed in the end. His agent begged him to audition and Robin finally gave in auditioning along with other top contenders including Jason Scott Lee, Russell Wong and Dustin Nguyen. Seven auditions later, he was Liu Kang in Mortal Kombat (1995).

Robin also appears in a supporting role in the fighting video game adaption, DOA: Dead or Alive (2006), based on the Dead or Alive series.

Robin enjoys working with his hands, and when he isn’t making films he takes ceramic classes, paints, welds, and does woodworking.