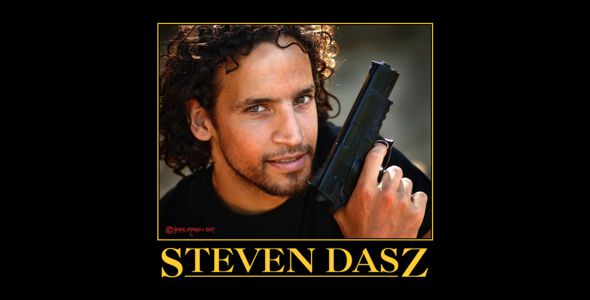 Steven Dasz was born in 1977 in Buenos Aires, Argentina. He started Tae Kwoon Do training when he was ten years old and soon began competing in martial arts tournaments. In 1992, Steven initiated his training in the Japanese martial arts “Ninjitsu” and “Aikido”. He also got started in competitive gymnastics and two years later, Steven, joined the competitive gymnastics team for the River Plate Athletic Sports club. In 1996 Mr. Dasz travelled to Sao Paulo, Brazil in order to train Ving Tsun Kung Fu directly from the master Leo Imamura, many more trips to Brazil followed the first one, in which Steven trained Capoeira and at the same time kept in touch with different masters.

In 2004, he played the main role in the short action film “The Contact”; he also directed the action scenes, choreographed the fights, and co-edited the film entirely. Afterwards, Steven wrote, directed and starred in the short “Evolucion”. He then played a Ninja in the short film “The New Guy” which had the honor of being screened in the Egyptian Theatre of Hollywood. Steven also participated in the film of Pedro Jaen “Tras los Pasos Del Bandolero” as the Kung Fu Instructor in October of 2009.