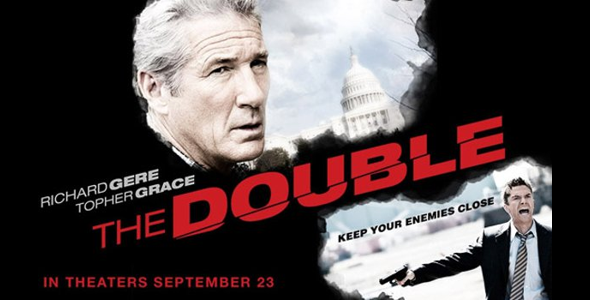 With the fight choreography by Martin Wheeler, you can guess the action in Richard Gere’s movie, The Double (2011), is Systema influenced. Martin worked on The Double (2011) last summer with the writers of Wanted and 3:10 to Yuma, Michael Brandt and Derek Haas. Wheeler not only choreographed the fight scenes in the spy thriller, but he also has a small role in the movie.

In The Double (2011), the mysterious murder of a US senator bearing the distinctive trademark of the legendary Soviet assassin “Cassius,” forces Paul Shepherdson (Richard Gere), a retired CIA operative, to team with rookie FBI agent, Ben Geary (Topher Grace), to solve the crime.

Having spent his career chasing Cassius, Shepherdson is convinced his nemesis is long dead, but is pushed to take on the case by his former supervisor, Tom Highland (Martin Sheen). Meanwhile, Agent Geary, who wrote his Master’s thesis on Shepherdson’s pursuit of the Soviet killer, is certain that Cassius has resurfaced. As Shepherdson and Geary work their way through crimes both past and present, they discover that Cassius may not be the person they always thought him to be, forcing both to re-examine everything and everyone around them.