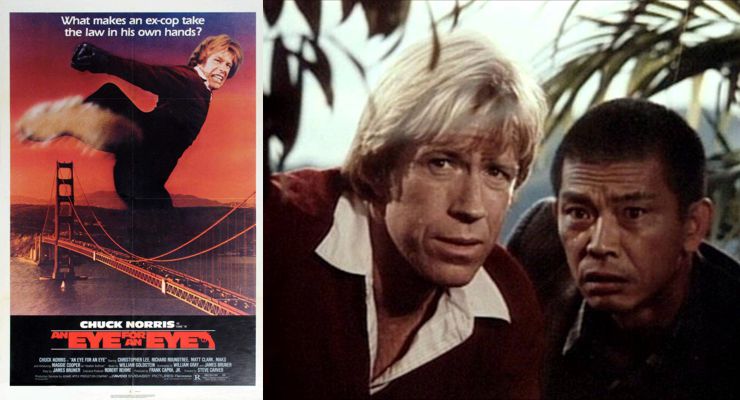 In An Eye for an Eye (1981) Sean Kane (Chuck Norris), an undercover San Francisco narcotics cop, and his partner, Dave Pierce (Terry Kiser) head into an dark alley to meet up with an informant, Tony Montoya (Mel Novak), who promises to break wide open the investigation they are working on by providing the name of the oriental drug kingpin. Minutes later, Pierce is shot dead, hit by a car, and then set on fire. Completely distraught, Kane throws one of the killers to his death out a third story window in full view of everyone on the street and gets into very hot water with his boss, Captain Stevens (Richard Roundtree). Unwilling to face discipline or to remove himself from the investigation, which is what he is told to do by his superiors, he quits the force and sets out to exact vengeance.

Dave Pierce’s girlfriend, Linda Chan (Rosalind Chao), is a reporter and she vows to bring the drug gang down herself by way of investigative reporting and public exposure. Linda does uncover the secret that Kane and Pierce never found, but she is killed before she can reveal anything. Kane sets out for revenge, and so does Linda’s grieving father James Chan (Mako Iwamatsu). Together they discover the truth and bring down the drug gang, and its very unexpected leader.