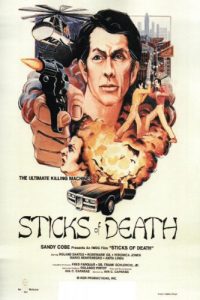 In the martial arts adventure, Sticks of Death (1986), a vengeful young man named Johnny (Roland Dantes), who had been a ruling drug lord before he was shot by a vicious rival, Ricky, (Perry Baltazar), moves in with his grandfather so he can heal. While there, Johnny begins to learn the art of stick fighting from his wise grandfather. At first he wants to use the sticks against his enemy to avenge himself, but soon he realizes that stick fighting has sharpened his mind, and his heart and he becomes a police officer instead. However he must always balance his desire for revenge with his desire to do what is right.