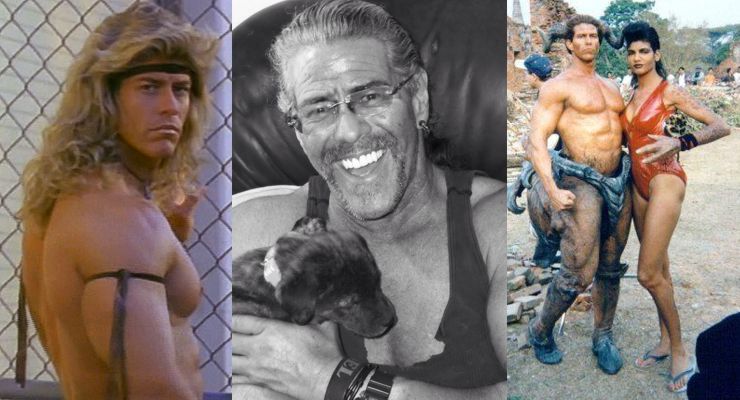 Rich: Why have you decided to begin creating more of your artwork?

Deron: I decided to get back to my passion for art after I was injured and was forced to take 3 months off. The timing was perfect as I’d been thinking about drawing again a year or so before my injury.

Rich: How would you describe your artistic style? 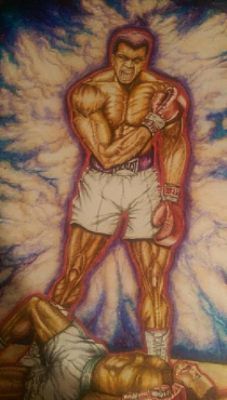 Deron: As far as my style, I don’t ever like following others in terms of trends. I like the idea of using super bold vibrant colors because they beam off the page and into your eye gate which automatically stimulates the brain. Kind of like a cold slap to the face.

Rich: You make the muscles stand out in your drawings, how do you achieve that?

Deron: I’ve been a comic book geek and fan for as long as I can remember. So of course, I studied how comics were drawn and looked at other fantasy artists like FRAZETTA and BORIS and BIZ. I LOVE the color and brooding darkness of the colors and thought, why not turn that upside down and draw or paint my art like its being hit by a sunbeam flowing through a prism. This meant no darkness, but every muscle and every vein can be seen, and I draw my art as if its like a snapshot from a moving scene. As far as making my work have such symmetry and muscular dimension, I usually use actual pictures of bodybuilding and incorporate the poses into my scenario. 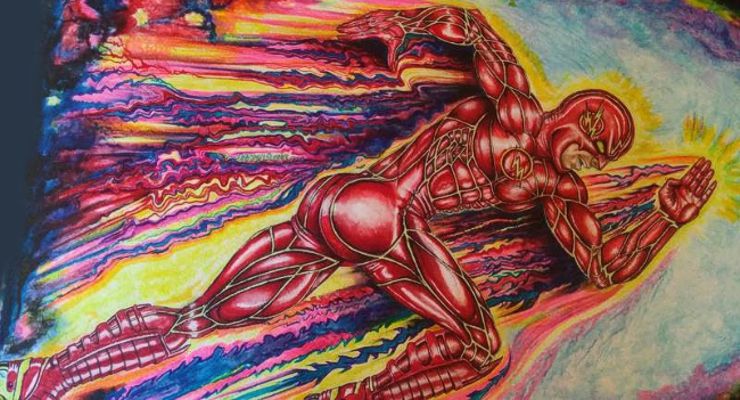 Rich: Can you tell us about your Flash drawing?

Deron: I’ve ALWAYS loved the FLASH as a character, but felt that the artist never really captured what his speed force looked like. First thing l did was study a bunch of track stars just as they’re flying off the blocks, the first couple steps are just amazing. They appear to me like bullets, their bodies aren’t upright but appear more parallel to the ground. This automatically makes them appear super fast. Next, because l love vibrant colors, I drew his speed trail as if every color of the rainbow was arching behind him as he breaks the speed of light. I also made a couple of costume adjustments because I just thought looked cool.

Rich: What are the tools of your trade? 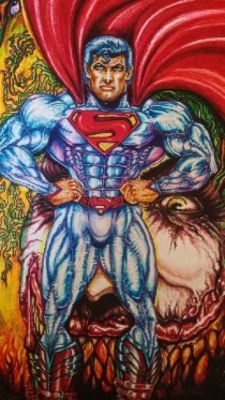 Deron: My favorite tools are TOMBO markers and colored pens. I use WATERCOLOR paper so that I can layer color on top of color in order to blend them.

Rich: On American Gladiators you portrayed Malibu. Is your personality at all like Malibu’s?

Deron: I did play a character called MALIBU on AMERICAN GLADIATORS. Malibu was a larger than life, laid back Surfer, who, win or lose, always saw life as a party. To me MALIBU was the comic relief of the show. All the other cast members were taking the show so seriously, as if it was the SUPER BOWL. It makes me laugh because, on one hand, yes, the competition was 100% real, but it was also supposed to be Entertainment. It’s funny that, even though I left the show early, I was one of the most popular gladiators. People love it when they see larger than life character’s poke fun at themselves. Did I fashion MALIBU after myself? Yes, but a WAY OVER THE TOP version of me.

Rich: How did you get the role of Motaro in Mortal Combat: Annihilation? 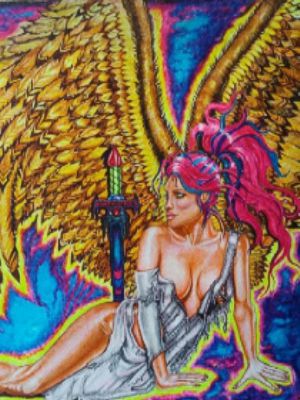 Deron: Mortal Kombat Annihilation was by far the most rewarding character I’ve portrayed because, not only was l responsible for bringing a video character to real life, but l was wearing a lot of prosthetic make-up which was physically challenging. The horns were fastened so tightly to my temple’s that they gave me constant pounding headaches. The teeth cut into my gums causing pain and bleeding. The other problems were my body make up. I was forced to stand or sit, but never recline, because anything that touched the make up on my back could smear it causing hours of touch up work. The other challenge was fighting because, again, if I were to move wrong or hit the prosthetics they could tear. The real bummer was that, due to budget problems, about 5 minutes of my screen time and fight scenes were cut. This, in my opinion and that of many others, was that this really hurt the production. Not because of me so much, but the fan’s of the game were expecting MORE MOTARO. I had 5 auditions for the role. They were also asking me to read for Shau Kahn.

Rich: What was your most memorable role as an actor? 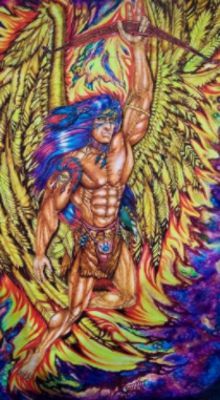 : My most memorable moment is really a tough one, because I’ve done so many INCREDIBLY memorable jobs. To pick one, I would go with Married With Children because it was my very first job and because it got so much airplay that people ask me if I was that guy on the show. Plus, I was so nervous I couldn’t think straight. But what a blast it was to get my very first role on such an awesome show. The other TV favorite was on a show called Curb Your Enthusiasm  where I played a furious wrestler that was cursing out the shows star Larry David, creator of SEINFELD. What made that scene so hilarious was that as I was cursing him out but with three young sons of mine in the car, I could use no four letter words as the kids might copy dad’s bad behavior. Instead I used extremely COLOR FILLED words that actually caused Larry David to break character and howl. This happened three different times. Later l was told by the assistant director that NO ONE had ever got Mr. David to laugh. The episode, in case anyone is interested, is called THOR.

Just a FYI as l look through my career I’ve portrayed more SUPERHEROES and larger than life characters than any other actor in history.

Hope you enjoyed the trivia flash into my past.

Rich: You do have an inspiring life story and you dealt with many hardships. Do you hope by telling your story that you will inspire others?

Deron: There’s a saying that goes something like this … 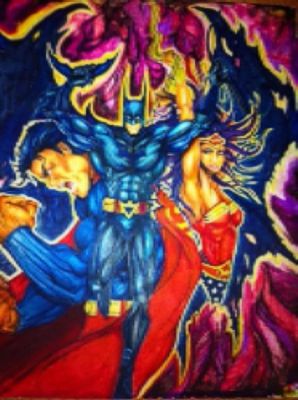 Art Imitates Life, and this is very TRUE when it comes to my life. MY FAITH in GOD is most IMPORTANT and all l attempt to DO or BE is an outpouring of GOD’S LOVE, which flows through me into the lives of the people I meet, whether on a movie or TV set, at the gym, at Church, or at the grocery store. Basically, everywhere I go is an opportunity to meet a new friend. I think that there are many HURTING and LONELY people that are genuinely thankful when I smile and give them a word of encouragement. It may take only 2 seconds, but the impact is amazing.

Rich: What words of wisdom do you want to leave for others?

Deron: Lets face it, life is tough on everybody, RICH or POOR. There was a French philosopher named Blaise Pascal and he said “there is a GOD shaped void in EVERY man’s heart which only GOD can fill.” Every day people try to fill that GOD shaped hole with alcohol, drugs, pornography, other people etc. and yet the VOID REMAINS. That GOD shaped void can only be filled by GOD, nothing else. My words of wisdom would be, Seek GOD out and let Him fill the hole.