Fanfare is certainly in order for Blackline Comics’ first major acquisition: an action-packed martial arts thriller in the ENTER THE DRAGON vein entitled BLACK SALT: THE LAST HEROES LEFT. Produced and conceived by Ratti Entertainment, Inc. of Columbus, Ohio, its founder, Owen Ratliff, has developed this kung fu masterpiece for the past five years, always with a multi-media strategy in mind.

BLACK SALT first took roots as a motion picture screenplay written by Owen. By far the franchise’s strongest asset, the film project’s prospects have grown steadily. As of this writing, several big league Hollywood studios have ex-pressed enough interest in the project to begin campaigning to get BLACK SALT made under their respective banners. Not one to rest on his laurels, Owen also has in development a children’s animated television series and a video game version of BLACK SALT, and already has a leisure and workout apparel line for the feanchise Incidentally, BLACK SALT goodies, including logo drawstring knapsacks, will be available from Ratti Entertainment representa-tives at this year’s San Diego Comic-Con 2009 this July 23-26. 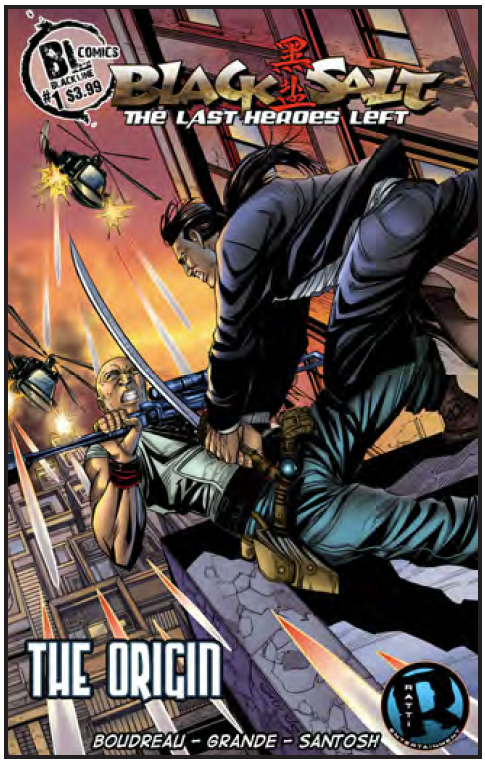 The most recent kicker (no pun intended) is the comic book mini-series, written by Chad Boudreau (as adapted from Owen Ratliff’s screenplay), with art by J.C. Grande (Image’s JOHNNY MONSTER) and coloring by Santosh Kumar Rath. And best of all, Blackline gets to publish it! Keep watching this space for BLACK SALT’s Fall 2009 release date!