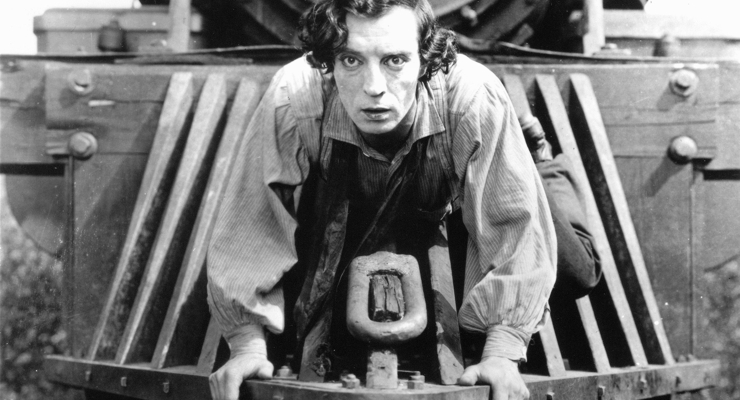 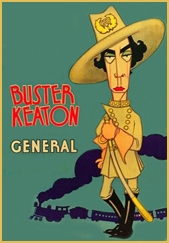 Buster Keaton practices Systema as he rolls, fights and tumbles with a relaxed body, our goal in Systema! As a Systema instructor, I am always looking for examples of the type of movement we utilize in our art.

Last night I watched The General, made in 1926 in Oregon using three wood burning locomotives. As I watched the amazing grace of Keaton, I saw he had trained his body to relax in all situations, even while on the train’s cow catcher, or while stuck towing a cannon car with his foot!

In the beginning of The General, Buster Keaton practices Systema when he twice jumps in front of a line of men wanting to enlist in the Civil War, and Keaton does it in such a relaxed style, no one in line notices Keaton has butted in. That’s an example of what relaxation will do for you, (although it is rude to butt in line!).

Further, to get back in the front of the line after he follows the wrong person, Keaton bolts over two or three tables with such grace that it seems entirely normal to the men who take the longer walk around the tables.

Wikipedia tells us how Keaton learned to totally relax his body…

At the age of three, Keaton began performing with his parents in The Three Keatons. He first appeared on stage in 1899 in Wilmington, Delaware. The act was mainly a comedy sketch. Myra played the saxophone to one side, while Joe and Buster performed on center stage. The young Keaton would goad his father by disobeying him, and the elder Keaton would respond by throwing him against the scenery, into the orchestra pit, or even into the audience. A suitcase handle was sewn into Keaton’s clothing to aid with the constant tossing. The act evolved as Keaton learned to take trick falls safely; he was rarely injured or bruised on stage. This knockabout style of comedy led to accusations of child abuse, and occasionally, arrest. However, Buster Keaton was always able to show the authorities that he had no bruises or broken bones. He was eventually billed as “The Little Boy Who Can’t Be Damaged,” with the overall act being advertised as “‘The Roughest Act That Was Ever in the History of the Stage.” Decades later, Keaton said that he was never hurt by his father and that the falls and physical comedy were a matter of proper technical execution. In 1914, Keaton told the Detroit News:

The secret is in landing limp and breaking the fall with a foot or a hand. It’s a knack. I started so young that landing right is second nature with me. Several times I’d have been killed if I hadn’t been able to land like a cat. Imitators of our act don’t last long, because they can’t stand the treatment.

Keaton claimed he was having so much fun that he would sometimes begin laughing as his father threw him across the stage. Noticing that this drew fewer laughs from the audience, he adopted his famous deadpan expression whenever he was working.

The act ran up against laws banning child performers in vaudeville. It is said that, when one official saw Keaton in full costume and makeup and asked a stagehand how old he was, the stagehand then pointed to the boy’s mother, saying, “I don’t know, ask his wife!”

Comedy director Leo McCarey, recalling the freewheeling days of making slapstick comedies, said, “All of us tried to steal each other’s gagmen. But we had no luck with Keaton, because he thought up his best gags himself and we couldn’t steal him!” The more adventurous ideas called for dangerous stunts, also performed by Keaton at great physical risk. During the railroad water-tank scene in Sherlock Jr., Keaton broke his neck when he fell against a railroad track, but did not realize it until years afterward. A scene from Steamboat Bill Jr. required Keaton to run into the shot and stand still on a particular spot. Then, the facade of a two-story building toppled forward on top of Keaton. Keaton’s character emerged unscathed, thanks to a single open window which passed directly over him. The stunt required precision, because the prop house weighed two tons, and the window only offered a few inches of space around Keaton’s body. The sequence became one of the iconic images of Keaton’s career.

At the age of 70, Keaton suggested that, for his appearance in the 1965 film Sergeant Deadhead, he run past the end of a firehose into a six-foot-high flip and crash. When director Norman Taurog balked, expressing concerns for Keaton’s health, Keaton said, “I won’t hurt myself, Norm, I’ve done it for years!”