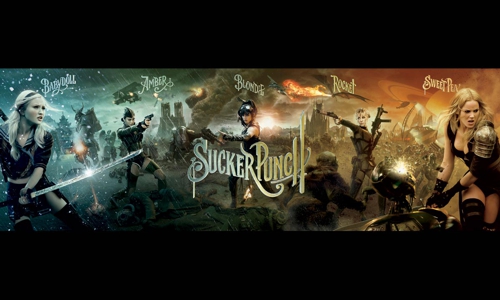 In the movies, you can tell a lot about a woman by the kind of sword she carries. If she wields a medieval broadsword, she’s a rough, tough chick like Michelle Rodriguez in BLOODRAYNE (2005) or Bridgette Nielsen in RED SONJA (1985). If she flourishes a rapier, she’s a sassy, lusty wench like Catherine Zeta-Jones in THE MASK OF ZORRO (1998) or Geena Davis in CUTTHROAT ISLAND (1995). If she totes a Chinese jian, she’s a lady of class and refinement like Michelle Yeoh in CROUCHING TIGER, HIDDEN DRAGON (2000) or Cheng Pei Pei in COME DRINK WITH ME (1966). But if she brandishes a samurai sword, she’s a very kinky girl. Think Uma Thurman in KILL BILL (2003) or Milla Jojovich in RESIDENT EVIL.

What is it about samurai swords? In those unusual occasions when a crime is committed with a sword, it’s almost always with a samurai sword. The hottie in a dominatrix catsuit with a samurai sword slung over her shoulder has been a B-genre stereotype for well over a decade, especially in Asian cinema. Anyone who has actually trained with samurai swords knows that a shoulder-slung scabbard is absurd. In the traditional Japanese art of blade drawing, or iaido (2003), the sword is worn on the hip for good reason. For one thing, it’s closer to your hands. For another, it’s really hard to draw a sword from off your back without exposing your underarms. Nevertheless, a phallic handle jutting off the shoulder of a beautiful actress looks great for close-ups. SUCKER PUNCH is banking on this with the newest addition to the growing bevy of samurai-sword-wielding heroines. Baby Doll, played by the stunning Emily Browning, looks smoking hot in her school girl mini-skirt and samurai sword. Flanked by four other stunning, scantily-clad women, SUCKER PUNCH is a sword nerd’s fantasy, dressed up as a girl-empowering adventure, complete with fishnet stockings and high heels. 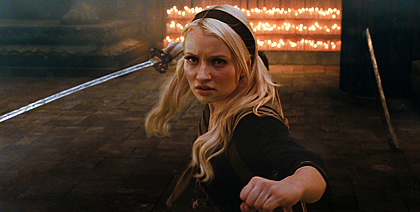 SUCKER PUNCH is Director Zach Snyder’s first original feature film. His previous work has all been based on previous material. His debut film, DAWN OF THE DEAD (2004) was a remake of George Romero’s 1978 film and featured the now common fast-moving zombies, previously only seen in the 2002 Danny Boyle film 28 DAYS LATER. He struck gold with his 2007 graphic novel adaptation 300, which posted the third-highest opening weekend for an R-rated film ever, trailing only THE PASSION OF CHRIST (2004) and THE MATRIX REVOLUTIONS (2003), the final installment of the trilogy. His second R-rated comic-book-adaptation WATCHMEN, was eagerly anticipated but not as well received in 2009. Nor was the 2010 CGI-animated feature LEGEND OF THE GUARDIANS: THE OWLS OF GA’HOOLE. Based on the first three books of the series by Kathryn Lasky, GUARDIANS went largely unnoticed by the growing hordes of comic and zombie fans that have populated Snyder’s audiences up to this point. 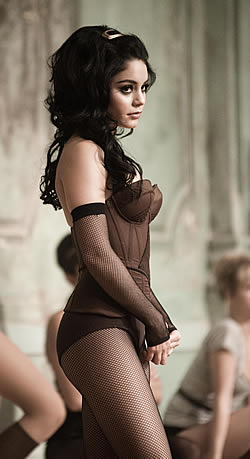 Development for SUCKER PUNCH began in March 2007. Written by Snyder and Steve Shibuya, the script was finalized in five months. Pre-release surveys forecast that SUCKER PUNCH might have trouble making more than $20 million in its opening weekend. In a bid to insure acceptance amongst Snyder’s loyal fans, the film underwent significant changes since the movies final cut last fall. Those editing changes included a new ending and the elimination of an implied rape. With the ink still fresh on Snyder’s contract to direct a new SUPERMAN film, Warner Bros. are banking heavily on the success of SUCKER PUNCH and Synder’s acceptance by Geekdom.and was actually intended to be filmed before the production of WATCHMEN. During the interim, Warner Bros. announced plans to convert the film to 3D in post-production – a decision Snyder ultimately opposed, not wanting to ruin the visual spectacle with rushed 3D conversion. He told MTV: “We’ve looked at a bunch of conversions, so whether or not we have the time to do it right – I’m not going to do it if we don’t have the time to really be meticulous with it,” he said. “It’s such an awesome piece of work and everyone’s worked so hard to make it awesome, so I don’t want to screw it up with bad 3-D.”

The film is visually stunning. Beyond the easy-on-the-eye starlets, the CGI-generated scenery is lush and vivid. Snyder has polished his signature slow-motion flying fight scenes so they gleam in all the trailers. Browning, who had hopes of rivaling Emma Watson’s Hermione with her role as Violet in LEMONY SNICKET’S A SERIES OF UNFORTUNATE EVENTS (2004), has grown into a seductive starlet, accentuated by Baby Doll’s platinum bleach-blonde hair and heavy mascara. She carries the role astonishingly well. As for the rest of the warrior women quintet, Abbie Cornish plays Sweet Pea; she is enjoying two premieres as LIMITLESS opened the week before. Cornish has claimed in interview that her mother was an Australian national karate champion and that she herself dabbles in the martial arts of karate, kickboxing, taekwondo and ninjitsu. Vanessa Hudgens, cast as Blondie ironically, is also enjoying two premieres with BEASTLY opening in the first week of March, however that Beauty and the Beast remake already left the screens before SUCKER PUNCH opened. Struggling to grow out of her Disney princess typecast from HIGH SCHOOL MUSICAL (2006), Hudgens is sorely underused. Jena Malone plays Rocket. She has been compared to Jodie Foster as they were both child actresses, but perhaps more so because she played the child role of Foster’s character Ellie in CONTACT (1997). Jamie Chung plays Amber and as an Asian actress, she has the most experience as a sword hottie. She starred alongside Chow Yun Fat in DRAGONBALL: EVOLUTION (2009). More significantly, she played Heaven Kogo on the short-lived ABC Family series SAMURAI GIRL (2008). 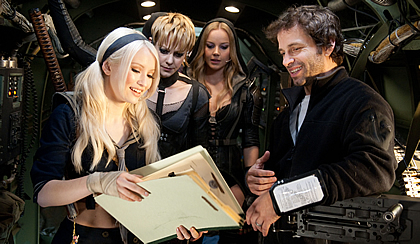 Fights were choreographed by Damon Caro, who worked on DAWN OF THE DEAD, WATCHMEN and 300, along with many other action films like BOURNE ULTIMATUM (2007), NEVER BACK DOWN (2008) and Sammo Hung’s MARTIAL LAW (1998-2000). While each actress delivers some hand-to-hand fights in a steampunk trench warfare sequence, most of the choreography is more like that of a videogame. It’s so CGI-laden that the actresses are wirework puppets, which isn’t always a bad thing, especially in Snyder’s hands. That trench warfare fight and the preceding giant samurai fight, both set to grinding rock soundtracks, stand out as Snyder’s shining scenes in the film.

SUCKER PUNCH’S claim as Snyder’s first original film is marginal as it is mostly pastiche of other classic films. The film treads the razor’s edge between homage and plagiary. Like INCEPTION (2010), it is a dream within a dream, or perhaps a hallucination within a delusion. Early buzz touted SUCKER PUNCH as Alice in Wonderland with machine guns’ and a version of Jefferson Airplane’s White Rabbit chimes in on the soundtrack, but the film borrows liberally from films such as ONE FLEW OVER THE CUCKOO’S NEST (1975), BRAZIL (1985),MOULIN ROUGE! (2001), LORD OF THE RINGS: THE RETURN OF THE KING (2003), HARRY POTTER AND THE GOBLET OF FIRE (2005), THE GIRL WITH THE DRAGON TATTOO (2009), UNSTOPPABLE (2010), BURLESQUE (2010) and many others. In fact, you could create an indulgent drinking game by taking a shot for every film cited. Despite its seductive cast and a plot that moves quickly from racy women-in-prison to risque brothel dancers to provocative ultra-violence with hotties and samurai swords, SUCKER PUNCH is inhibited by its PG-13 rating. Given Snyder’s previous R-rated successes and the nature of the genre, it is surprising that he didn’t just go for all out R-rated exhibitionism. SUCKER PUNCH makes for luscious eye-candy, but the dizzying amount of film references, coupled with aspirations of existentialism, feminism and titillation, loses its way in the journey down the rabbit hole. Scott Glenn sums it up all very well as SUCKER PUNCH’s fortune-cookie spouting wise man, “If you don’t stand for something, you’ll fall for anything.”