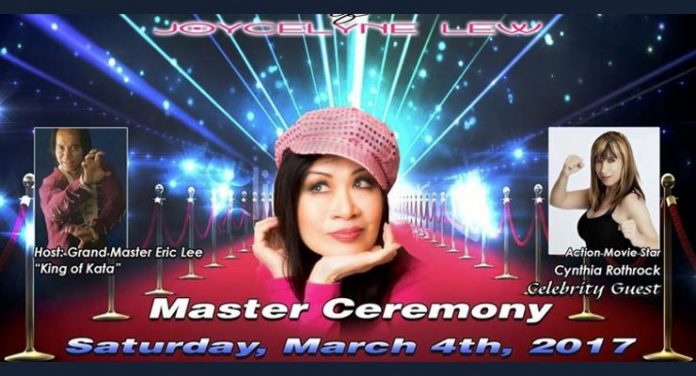 “I have set up Chuck Norris in An Eye For An Eye, beaten up Steve McQueen in Tom Horn, almost set Yul Brynner on fire in The Ultimate Warrior and shoot Bruce Lee in the face in Game of Death, but that is nothing in compared to the roast I’m going to give Joycelyne!” exclaimed Novak. 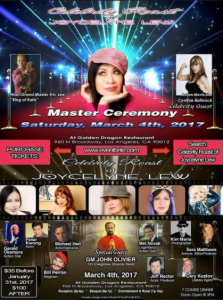 “Had a blast guesting on Joycelyne’s cooking show! She is such a great artist and chef, that she even taught a Persian woman (yours truly) how to make hummus!” joked Ghaffari.

Joycelyne began appearing in films, such as Fatal Beauty with Whoopi Goldberg, Tai-Pan, Hindsight, Shattered Image, and a lead in Battle Creek Brawl AKA: The Big Brawl, for which she received excellent reviews. She had the largest part ever given a woman in the Kung Fu television series; and other television credits include The Golden Girls, Married with Children, General Hospital, and The Young and the Restless.

She has been recognized and listed in “The Who’s Who of Women”, and she is on the Blue Ribbon Committee of the Emmy Awards, and the National Endowment for the Arts Judging Committee for Film Grants.

Her ability to mimic characters using many accents has led to her demand as a voice-over artist. Joycelyne re-dubbed the lead in Bernie Casey‘s directoral debut, The Dinner. She also has done cartoon voices for Hanna Barbara, industrial narrations, trailers for features, commercials, and dramas on National Public Radio. Joycelyne also hosts a cooking show called Cooking In With Joycelyne.

The press check-in for the roast is at 4:30pm, red carpet reception starts at 5pm, the 7 course banquet dinner is at 6pm, and the entertainment and roast is at 7pm. The roast will take place at the Golden Dragon Restaurant, 960 N. Broadway, Los Angeles 2017.

For more info on the event, please go to our Facebook Page

Source: The Williamson Management of behalf of Joycelyne Entertainment