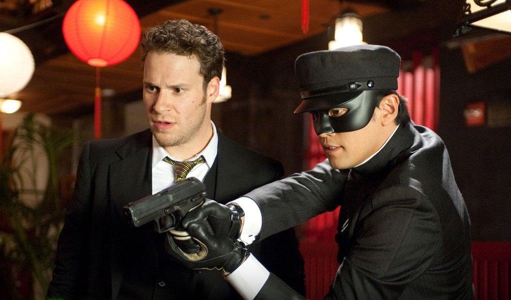 “Oh, East is East, and West is West, and never the twain shall meet.” So wrote Rudyard Kipling in his often-quoted poem “The Ballad of East and West.” Who better to invoke for an examination of the hallowed eastern sidekick Kato? As Taiwanese pop-star Jay Chou takes up the mask that once concealed Bruce Lee’s American debut, it’s time to reflect upon the staying power of Hollywood’s most bad-ass chauffeur and what it might mean in the big picture of shifting American and Chinese cinematic markets.

First, a little history. The GREEN HORNET radio show began as a spin-off of the LONE RANGER in the 1930s (coincidentally it attempted to become a television spin-off of BATMAN some 4 decades later). From the start, Kato’s ethnicity was a tad ambiguous. He began as Japanese, but when WWII broke out, he was quietly amended to be just “oriental.” Over the course of his radio, television and comic book incarnations, Kato would be billed as Japanese, Korean or Filipino, yet most often be played by Chinese actors. The name Kato has some Japanese roots, but it also has African and Latin roots. 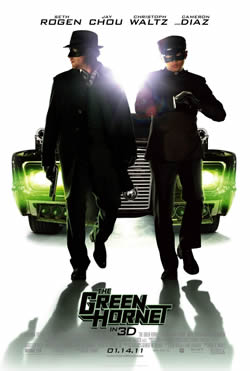 In many ways, Kato is an Asian noble savage. The noble savage motif is a subject of literary debate. It draws the race card as noble savage sidekicks are stereotypically subservient to their Caucasian masters. They are often depicted as the strong, silent type who would be honored to take a bullet for the hero, and usually do. The Lone Ranger’s sidekick Tonto is a typecast example. Given the Green Hornet’s connection by blood in fiction (creators conceived the Green Hornet to be related to the Lone Ranger), the parallel between Tonto and Kato are striking, right down to the second syllable of their names.

The noble savage motif still exists, although today it’s much more PC. Arguably, Mark Dacasco’s character Mani in BROTHERHOOD OF THE WOLF (2001) and Cung Le’s character Manh in PANDORUM (2009) were both permutations on the motif. Mani and Manh owe a debt to Kato, as Kato was the first to turn the tables and empower the noble savage.

In 1940, after finishing a run as Chinese detective CHARLIE CHAN, the pioneering Chinese actor Keye Luke donned the mask. That’s right. Blind Master Po himself from the 1970s KUNG FU television show was the first cinematic Kato. There were two GREEN HORNET film serials featuring Luke with over two dozen installments. It was also in 1940 that GREEN HORNET debuted as a comic book, beginning a long and convoluted tradition of Green Hornet comics from an assortment of artists and publishers. The latest, apart from the new adaptation for the film, is by Kevin Smith. Smith casts Kato as a female. Mulan Kato is the daughter of the original Kato, an amusing tip of the chauffeur cap to the legendary Chinese cross-dressing warrior woman, Mulan. Smith was one of the original scriptwriters associated with GREEN HORNET, which is mentioned here as it relates to the new film. However, Kato’s comic book history is another topic entirely.

In 1964, a satirical version of Kato appeared in A SHOT IN THE DARK, the first sequel in Peter Seller’s original PINK PANTHER series. Bert Kwouk played Kato, but the name was changed to Cato Fong eleven years later in the third installment, THE RETURN OF THE PINK PANTHER. As the valet of the bumbling Inspector Jacques Clouseau, Kato/Cato ran the gambit between oriental stereotype and Asian representative. In the early installments, he was the brunt of many racist jokes, but in later installments some attempt was made to rectify that, although he was still portrayed as a brothel boss. When Steve Martin recently revitalized the franchise, Jackie Chan was approached for the role, but the character was dismissed as potentially too derogatory.

As Clouseau’s Kato was transforming to Cato, the real Kato emerged. It was the Little Dragon who catapulted Kato to iconic stature. When Bruce Lee donned the mask, it took Kato to another level. The TV show only ran for one season in 1966 to 1967, and would probably have been lost in the annals of vintage television if not for Lee. In the final episode, Praying Mantis, Lee duels Mako in the first major demonstration of kung fu to ever appear on American television. But it was on the other side of the Pacific where Kato struck the deepest blow. When GREEN HORNET was televised in Hong Kong, it was called the KATO SHOW. The image of Bruce Lee opening can after can of whoop ass in Hollywood burned itself into the Chinese psyche like a Shaolin Dragon and Tiger brand . In Asia, Kato was a new hero and a global icon. 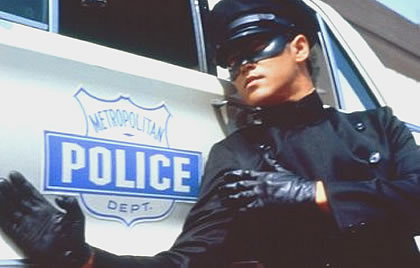 In 1994, Chin Kar Lok donned the mask in Qing Feng Xia which, though it translates to THE GREEN HORNET, was really about Kato. It was an unremarkable film, but in its wake came BLACK MASK starring Jet Li, released the following year. Although Li’s character wasn’t named Kato, he wore a similar mask and chauffeur’s cap to Lee’s Kato, and the comparison was made by characters within the film. Ironically, Jet Li was also considered for Kato in the 2011 version, as was Stephan Chow, the comic genius behind both SHAOLIN SOCCER and KUNG FU HUSTLE. Famed filmmaker Tsui Hark wrote BLACK MASK, and went on to both write and direct a sequel, BLACK MASK 2: CITY OF MASK, in 2002. BM2, which had Andy On taking over the lead role, went largely unnoticed, perhaps most remembered for co-starring the controversial actress Traci Lords. The following year, Quentin Tarantino gave Kato a nod in his glorious homage to Asian action film, KILL BILL VOL. 1. The entire villainous Crazy 88 gang, led by the MASTER KILLER himself, kung fu film veteran Gordon Liu, donned Kato masks and chauffeur-like suits.

The most recent homage to Kato came in Donnie Yen’s 2010 release, LEGEND OF THE FIST: THE RETURN OF CHEN ZHEN. In an ironic twist, Yen revisits Bruce Lee’s character of Chen Zhen from FIST OF FURY (1972) but ends up donning the Kato mask in the process. 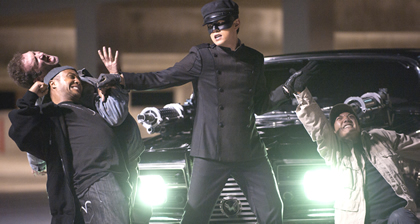 Casting Jay Chou as Kato in the new GREEN HORNET is an interesting strategy. Chou is a major Taiwanese pop star like Justin Bieber. Chou even bears a slight resemblance to Bieber, only older and Asian. Bieber even has a similar hairdo. Chou has starred in a few kung fu films, but his talent lies in being a pop singer. CURSE OF THE GOLDEN FLOWER (2006) starred A-list actors Chow Yun Fat and Gong Li and tried to ride the wake of CROUCHING TIGER, HIDDEN DRAGON in its opulence. KUNG FU DUNK (2008) was derivative of SHAOLIN SOCCER, only it was Tai Chi basketball and showcased stunning CGI fights. It was a major hit in Asia but got no American distribution. TRUE LEGEND (2010) marked master fight choreographer Yuen Woo-Ping’s return to the director chair and was shown in Asia in 3D.

Playing opposite Seth Rogen as Brit Reid a.k.a. the Green Hornet, Chou completely turns the tables by becoming the real force behind the crime fighting duo, as Rogen plays his characteristic buffoon. The buddy flick routine works well for Chou and Rogen, and the film is punctuated with absurd yet entertaining action. Chou’s CGI combat echoes KUNG FU DUNK, and accentuates the comic-book quality of the story. There’s a great nod to Lee in Kato’s sketchbook. The filmmakers are well aware of the Kato mythos they are tapping. It’s funny and frenetic, just as a good 3D action comedy should be. By the way, be sure to watch the credits as the 3D is eye-popping.

Where GREEN HORNET gets really interesting is the Chollywood factor. It has potential to be a major cross-over hit, both here and in Asia. With Chou’s drawing power and the iconic status of Kato in Asia, GREEN HORNET has tremendous potential for the booming Asian market.

Chou timed a U.S. concert tour to coincide with the release of the GREEN HORNET. In GREEN HORNET, Chow sings in the film and in the end credits. He even delivers a song about nunchuks. GREEN HORNET is his introduction to America, where he already has a large fan base in the Chinese community. His New Year’s Concert, held in the HP Pavilion in San Jose, CA (the home of MMA’s Strikeforce), sold out even though it was advertised only within Chinese circles.

Perhaps Kipling was wrong. Perhaps East will meet West and vice versa. Even if it doesn’t, filmmakers can hedge their bets by making movies with potential appeal to both markets. Kipling could have never guessed that such a bridge would be a kick ass chauffeur.