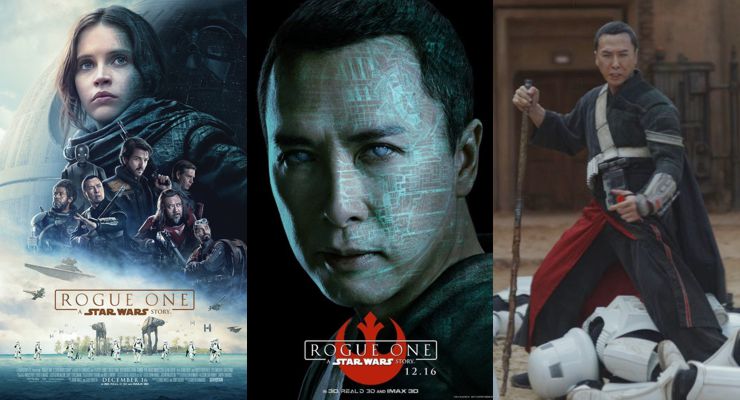 Donnie Yen revealed in an answer to a question from a little girl named Miriam, that he designed a unique martial arts style for his character in Rogue One: A Star Wars Story (2016). According to EpicStream Donnie Yen states;

At the same time Donnie complained about the contact lenses his character had to wear.

“It was not comfortable! I had to take them off every two hours and rest in between for twenty minutes. With the contact lenses, it was very blurry, I couldn’t see clearly, so it was very distracting.”

Donnie Yen’s character, Chirrut Îmwe, is not a Jedi, but a blind warrior with incredible fighting skills and it is his belief in the Force that seems to drive the warriors on their dangerous mission.

The film is produced by Lucasfilm and distributed by Walt Disney Studios Motion Pictures. Principal photography began during early August 2015 at Elstree Studios near London. Rogue One is scheduled to be released on December 16, 2016 in the United States.

Rogue One: A Star Wars Story (2016) takes place during a time of great conflict, when a group of unlikely heroes must band together on a mission to steal the plans to the Death Star, the Empire’s ultimate weapon of destruction. This key event in the Star Wars timeline brings together ordinary people who choose to do extraordinary things, and in doing so, become part of something greater than themselves.