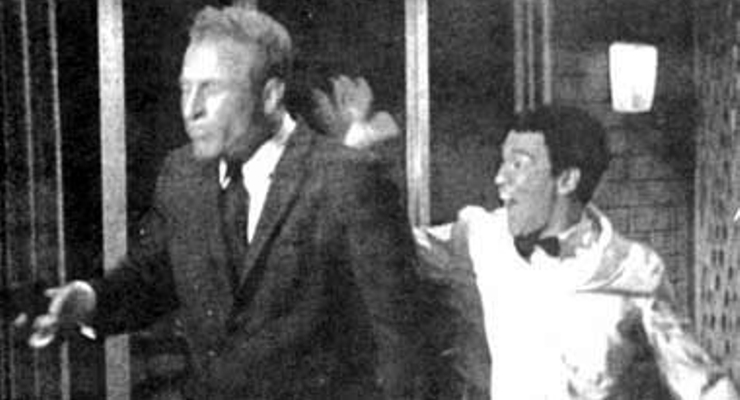 Judo and wrestling legend Gene LeBell has hooked horns with the best in the game and in the process has earned the moniker as “The Toughest Man Alive,” by his peers. One of those to sing the phrases of “Judo” Gene was Bruce Lee.

In addition to his years of training and teaching martial arts, Gene is also one of Hollywood’s top stunt men. In fact, it’s almost impossible to watch an action film without seeing Gene firing a machine gun, getting tossed out of a window or taking a fall for one of the super stars of the silver screen.

It was because of Gene’s prowess in the martial arts and his popularity in Hollywood’s stunt community that he was called in to check out a “new guy” by the name of Bruce Lee.

“I met Bruce when he was working on the television series, Green Hornet,” recalled LeBell. “Benny Dobbins was stunt coordinator for the show and he called and asked me to check out some kid by the name of Bruce Lee. ‘I got this guy who does the same stuff you do,’ Dobbins said.  Of course Benny didn’t know the difference between judo and kung fu, but he wanted me to watch this new actor work. One of the first things I noticed was that although Bruce was small, about 130 pounds, he had a tremendous upper body. Bruce was also very fast and wanted to always take the action beyond what the script called for.  Once the director called action, he got that and a lot more from Bruce.”

“Stuntmen and wrestlers have their own brand of humor and at first Bruce didn’t take my little joke too kindly,” LeBell said with a chuckle. “Eventually he realized we were just welcoming him into our group and before long he fit right in with the rest of the rowdy stuntmen.”

Gene went on to do stunt work in many episodes of “The Green Hornet,” with Lee. During their time together on the set, the future kung-fu super star and the legendary judo master got to know each other.

“Bruce liked doing parlor tricks on the set,” recalled LeBell.  “He would make a dollar disappear and other magic tricks. “You’ve got to remember when I first met him Bruce wasn’t famous.  Back then he was just another actor who did martial arts.”

LeBell and Lee became friends and frequently trained at each other’s dojo. It was during these sessions that Bruce was introduced to Gene’s grappling skills, and in return Bruce taught Gene how to kick.

“At that time I had a small dojo near Paramount Studios,” LeBell explained. “Bruce would come to my school and I’d go to his.  Back then he had a small school in China Town. We worked out on a one-on-one basis and we both learned a great deal from each other. He taught me a lot of kung fu moves that I had never seen before, and Bruce was phenomenal with his kicks. He taught me how to do crescent kicks, and spinning back kicks. Of course nowadays everybody does those kicks, but back then it was all new and exciting. In return, I showed Bruce some judo throws and grappling techniques. In fact, he used one of the judo grappling armbars I taught him in “Enter The Dragon.”

Although Bruce was impressed with Gene’s skill he wasn’t taken with grappling as a sport that would ever draw a big audience.

“I remember Bruce saying that pro wrestling would never be a popular spectator sport because they spend so much time struggling to get a hold or grip on each other,” Gene said. “Bruce would say, ‘wrestling is boring and people will turn on another channel.’ Well I wonder what Bruce would say if he were around today and saw the WWF, which is the most popular show on television today.”

As Gene and Bruce continued to work together on The Green Hornet, the kung fu star incorporated a few of Gene’s judo moves into the action.

“There was a couple of times when Bruce threw me using a judo throw during the filming of the Green Hornet,” Gene said. “He’d use a shoulder throw on me and I said to him, ‘Bruce toss in a couple of your kicks and show off your versatility.’ Another time I did a martial arts demonstration with Bruce. I was throwing a bunch of people all over the place then Bruce came out and threw me using a judo throw. I’ve even got a tape of that somewhere around the house.”

Gene also recalled the time when his friend, martial arts legend Bob Wall called and was all excited about working with Bruce Lee in the film “Enter The Dragon.”

“Brandon was a very tough martial artist and his dad would have been very proud of him,” Gene said. “The way Brandon and I met was kind of funny. Mike Vendrell is a great stuntman as well as an outstanding martial artist and Brandon’s kung fu teacher; well he frequently worked out with Brandon and one day Mike brought him to my dojo.  Mike (Mike Vendrell is a man that Gene respects so much he named a move after him in his Encyclopedia of Finishing Holds: “The Vendrell Vice.”) introduced us and asked me to work out with Brandon.  Brandon said, “You really want me to work with this old man?” Well I was about 50 then so I got on the mat and showed him how sadistic some old men are.  (Gene claims he’s still an old man and some claim he’s just as sadistic. Gene’s definition of “sadistic” is administering an attitude adjustment.) We had a lot of fun together and by the end of our workout I think Brandon went away with a new found respect for judo and senior citizens.”

Following their initial meeting some time passed before Brandon and LeBell met again.  This time it was on the set of the movie Rapid Fire. Gene was naturally playing the bad guy and Brandon the good guy.

“I was shooting a machine gun and Brandon shot me during a fight sequence,” Gene said.  “I wanted them to let Brandon beat me up and throw me through a window so I could take some nice falls for him and really show off his martial arts skills. Unfortunately they didn’t have time to do the extra stunts and it would have changed the script so Brandon just shot me.  Too bad, it would have been fun if he could have beaten me up a little first. Brandon was a great, great athlete. I just wish he coulda beat me up on screen. I mean, every star in Hollywood has beaten me up at one time or another so it would have been nice if Brandon could have done that too.”

Like his father, Brandon realized that Gene’s techniques could greatly augment his fight scenes in the movies so he sought out “Judo” Gene’s help to add some throws and locks to his growing martial arts repertoire.

“Brandon was really into his acting, but he also didn’t mind mixing it up on the mat either,” Gene said. “He came down to a few classes and we worked out together just like I did with his dad.  Brandon was a tough little scrapper.”