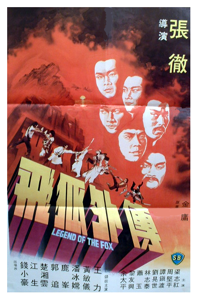 Legend of the Fox (1980) is about Hu Fei, the son of a hero swordsman. Both Hu Fei’s mother and father die shortly after his birth, and it becomes Hu Fei quest to discover who caused his parents’ deaths and to avenge them. Hu Fei knows that there are two renowned swordsmen who had something to do with his parents deaths and he has to confront them to find the answers he is looking for. Hu’s journey takes him to the domain of a poison clan and he becomes involved with a beautiful young woman, Cheng Lingsu who has become a master of various poisons and antidotes while being forced to cope with a treacherous uncle and his disciples, all part of the clan. Cheng Lingsu beomes Hu’s ally in the film

Note: Legend of the Fox (1980) is a Hong Kong Wuxia film. It is based on Louis Cha’s novel “Other Tales of the Flying Fox”. At one time, the film was one of the most rare Venom Mob, martial arts films available, but it has since been digitally remastered and it was released again by Celestial Pictures. This movie, truly utilized the talents of the Venom Mob, with incredible weapons sequences (swordfighting) and it also captured the true spirit of the brotherhood of martial arts. The plot is a bit tricky to follow and depends on flashbacks, but the studio photography is beautiful and of course includes the ornate sets and decor that the Shaw Brothers are famous for.

*The Venom Mob was made up of a group of martial arts actors from the Shaw Brothers Studio. The best known, Kuo Chui, always played the hero. Most studied at the Peking Opera School in Taiwan. They made numerous martial arts films together for Shaw films, after meeting director Chang Cheh. The movie Five Deadly Venoms pushed them to the forefront in the industry. They did all their own choreography, were excellent actors and Chinese weapons experts and, of course, the Opera had made them expert acrobats.