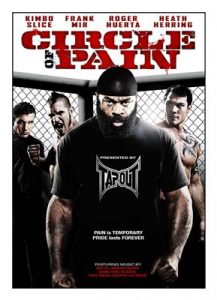 In Circle of Pain (2010) Dalton Hunt (Tony Schiena) retires at the top of his game from the world of mixed martial arts after a fight that goes tragically wrong. Unable to outrun his guilt, he loses his family, his title, and his way. But when a crooked promoter lures him back into a fight against the current undefeated champ, Dalton must enlist the aid of an enigmatic trainer to turn him back into a warrior so he can stand tall and do battle once again.