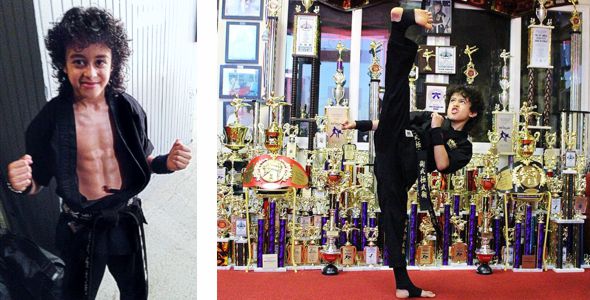 Nassim Faras Lahrizi (Young Dragon) has been cast in the upcoming “The Martial Arts Kid” – headlined by martial arts legends Cynthia Rothrock and Don “The Dragon” Wilson – and it quite literally is a role he was born to play and has been waiting his whole life for.

Seemingly born to fight, Lahrizi started training and mastering the techniques of martial arts when he was NINE MONTHS OLD!

At nine years of age..he already has five world titles!

At nine years of age…he already has 108 major titles!

At nine years of age..Nassim Faras Lahrizi is ready to star in a film with Cynthia “Lady Dragon” Rothrock and Don “The Dragon” Wilson!

Given his talent and passion for training – Rothrock called him one of the best martial artists she had ever seen upon first meeting him a little over a year ago – the only surprise is that he is not playing the lead in “The Martial Arts Kid”.

“We are going for a ‘name’ for the lead”, says James Wilson, Don’s brother and a co-producer on the film. “An announcement on that may be soon and will surprise some people.”

Though not the lead, James Wilsom says Lahrizi’s role will be significant.

“Nassim Faras Lahrizi is the quiet, unassuming kid in Don’s school that we learn is a tough, and skilled martial artist only when he has to fight”, says James Wilson.

It seems only a matter of time, however, until the “Young Dragon” is a household name.

For now, he is looking forward to making his first movie – with two of his idols, to boot.

“I’m very excited to make a karate movie with Don “The Dragon” Wilson and Cynthia Rothrock”, he says.

No matter what ups and downs come his way, Lahrizi says he will maintain his passion for martial arts.

“Martial arts helps keep me confident and disciplined and gives me strength”, he says.

For a small sample of the ability and passion that is catching everyone’s attention, see Nassim Faras Lahrizi in his 2014 demo video above.