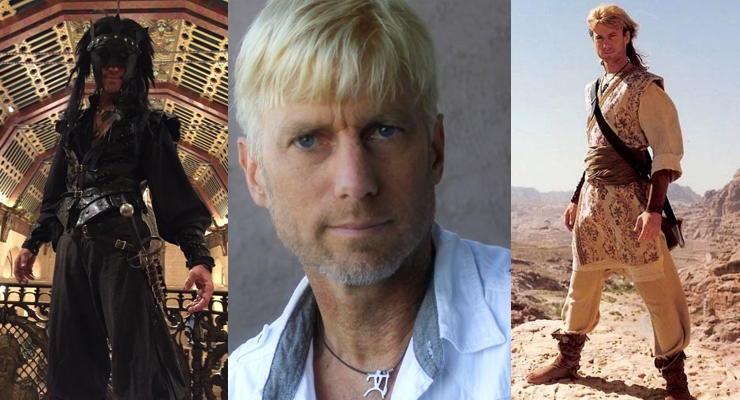 Sword player, stuntman, fight coordinator and martial artist, Robert Chapin, has trained in multiple martial arts including Tae Kwon Do with Hee Il Cho, Kali with the Dan Inosanto, and Wushu with Eric Chen.  He has also trained in the bullwhip with Anthony DeLongis.  Robert Chapin is also an expert in swordplay trained in the use of Broadsword, Rapier and Dagger, Smallsword, Katana, and in Fencing using a Foil, Epee, and Saber.

Robert Chapin was born on April 3, 1964. His parents were puppeteers and he and his brother, Stuart grew up making movies together. While attending Miami Dade Community College to study music and computer science, Robert began training in stage combat and swordplay with The Royal Chessmen, a group that performed living chess games at local renaissance fairs. Soon he joined a jousting group called The Knights Arrant and a small group called Ring of Steel, which performed swordfights at a local theme park called Pirates. It was a Pirates that he met Matthew Gratzner and Shannon Gans, who would later move to Los Angeles and create New Deal Studios.

In 1985, Robert Chapin moved to Orlando, Florida where he worked his way through college at the University of Central Florida by performing swordfights at a local dinner theater called Shakespeare’s Tavern. He graduted with a degree in Computer Science in 1987. While in college he continued to take drama classes and choreographed swordfights for a critically acclaimed production of “Romeo and Juliet”.

In 1989, Bob’s brother convinced him to move to Los Angeles where he found work as a swordsman on feature films such as Hook and Army of Darkness. In 1993, Bob wrote and starred in his first feature film Ring of Steel (1994), which was distributed by MCA Universal. Over the years, Bob went on to star in several other action films while building his credit list as an actor, stuntman, and fight coordinator.

Robert Chapin was certified in six weapons as an actor-combatant in 1995 with the Societies of American, British, and Canadian Fight Directors at the First International Stage Combat Workshop in London, England. Bob is also a stage combat instructor, and has taught classes at various workshops and colleges around the country, most notably UCLA, UCF, Strausberg, Westside Fencing Center, the Inosanto Academy, and the National Wushu Training Center.

As an actor, Robert has starred in films such as Dragon Fury I & II, Night of Terror, Lancelot: Guardian of Time, and Sinbad: The Battle of the Dark Knights, and more recently Lazarus Rising (2015).

Robert Chapin created the first web series based on user content called The Hunted. The show originally began as a class project for his stage combat students, but has now spread to include episode submissions from all over the world. In addition to producing and acting in the series, the show allowed him the opportunity to explore his other interests in film production including directing and editing, music, marketing and web design.