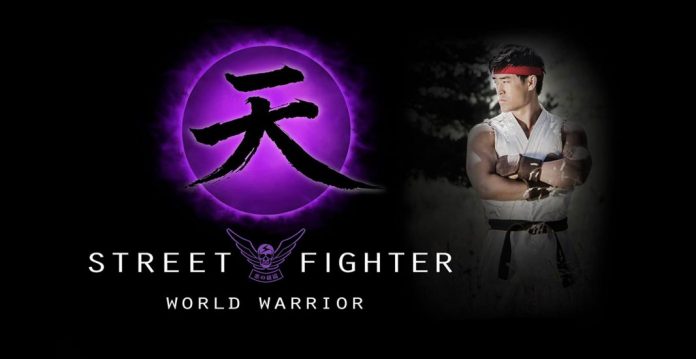 SAN DIEGO, CA, JULY 25TH 2014: The production team behind the successful STREET FIGHTER: ASSASSIN’S FIST (2014) series has today announced plans for its sequel; STREET FIGHTER: WORLD WARRIOR. Joey Ansah (THE BOURNE ULTIMATUM and SNOW WHITE AND THE HUNTSMAN), director and writer of Assassin’s Fist, together with cast members Mike Moh (‘Ryu’) and Gaku Space (‘Goki’), took to the stage at the Capcom Street Fighter Panel at San Diego’s Comic Con to announce the latest installment in the adaptation of the classic video game franchise. The new series is currently in development, with a launch date set for late 2015 / early 2016.

Producers Jacqueline Quella (ROMANZO CRIMINALE and DON’T TELL) and Mark Wooding (TOOLBOX MURDERS) together with Joey Ansah, and writer and series star Christian Howard, are responsible for the recent re-launch of STREET FIGHTER as a popular live-action franchise. STREET FIGHTER: ASSASSIN’S FIST debuted earlier this year on Machinima, the number-one global video entertainment network for young males, as a 12-part series. It has garnered in excess of 16 million views and has an unprecedented approval rating of 99.3%.

The new series will introduce more of the game’s iconic characters, and director Joey Ansah revealed first details of the plot: “The scale of WORLD WARRIOR is much larger, picking up where ASSASSIN’S FIST left off as we follow Ryu and Ken on their ‘Musha Shugyo’ (warrior’s pilgrimage). The Shadaloo criminal cartel will be introduced, led by the extremely dangerous M.Bison, which will naturally lead into the World Warrior tournament… and we all know what this means – fan favorites Guile, Chun-li, Sagat and Co. will be playing a big part!”

“There are some big and primal themes which we’ll be exploring in the sequel,” observed Mark Wooding. “It will be thrilling and naturally, as befits the game, the fights will be epic, but it will be driven by the characters, their stories, faults and problems. It will be a dark tale.”

Capcom’s wildly-successful STREET FIGHTER is one of the biggest fighting videogames, and has millions of fans and players worldwide. The announcement marks a return to Comic Con, the convention at which ASSASSIN’S FIST was announced in 2012.

Producer Jacqueline Quella said: “We are incredibly happy to continue our relationship with Capcom, to bring more of the iconic characters from the STREET FIGHTER videogame to the screen. We demonstrated with ASSASSIN’S FIST that an authentic, live-action version of videogames, with a compelling and dramatic storyline, can be made. We’ll be taking the same approach with the new series.”

“We are delighted to be working again with the team that did such an excellent job with STREET FIGHTER: ASSASSIN’S FIST,” said Matt Dahlgren, Associate Director of Brand Marketing at Capcom. “The response to it has been amazing, and working with filmmakers who are so passionate about the game is an extremely rewarding process.”

STREET FIGHTER: ASSASSIN’S FIST is being released internationally in autumn 2014 in DVD and Blu-ray formats, as well as on TV, video-on-demand and download-to-own. Distributed by Content Media Corporation, it was also announced at Comic Con that the DVD and Blu-ray versions of the series will include an exclusive, unreleased ‘Epilogue’ episode, as well as numerous extras; including behind-the-scenes material, deleted scenes and a Director’s commentary.

“We have gone the extra mile to ensure that the DVD/Blu-ray is packed with extras and exclusive content, to make it a ‘must own’ for fans who have already enjoyed the series on other formats. The STREET FIGHTER: ASSASSIN’S FIST journey is not complete until you have watched this version.” said Joey Ansah.