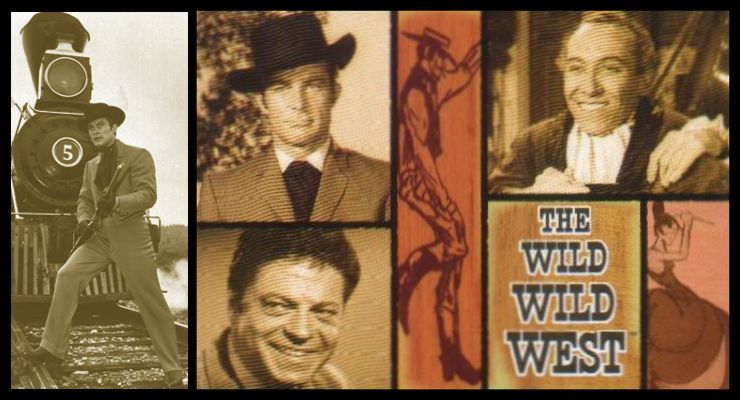 Film and television stunts are often exciting and dangerous and the the risks taken by stunt performers have a high possibility of injury. Stunt performers spend the majority of their working lives fighting people or falling off, over, or through things or avoiding things and accidents are bound to happen and they did happen on The Wild Wild West Television series.

According to Robert Conrad, stuntmen on The Wild Wild West wore standard elbow, knee and hip pads, but were obviously unable to wear helmets so head injuries were common place. Series stuntman Whitey Hughes recalled, “We had a lot of crashes. We used to say, ‘Roll the cameras and call the ambulances.’

He recalled an incident that occurred during a scene with polo ponies. “Bob was supposed to jerk a polo mallet out of my hand and knock me off the horse. I had a cable from the back of my neck to the saddle, and when I did the back-flip off the horse, it would hold me until I got straightened out, keep me away from it, and it would get me parallel with the horse, then let me loose. Somehow, I got hung up too long and went behind the horse’s heels. His foot caught me in the head and knocked me colder than a well-digger’s backend…I was out cold.”

The short-lived career of John Stelly was another casualty of The Wild Wild West. In a scene in the episode, The Night of Miguelito’s Revenge, Stelly was perched atop a 12-foot wall. “Stuntmen Dick Cangey and Red West (former bodyguard for Elvis Presley) had a hold of Bob, and as they crashed into the wall, Stelly was supposed to come down and land on top of them,” Hughes recalled. The latter had warned Stelly that he wouldn’t hit them unless he started the jump early. When he saw the fighters coming toward the wall Stelly was supposed to anticipate the crash and start coming down. Stelly, being inexperienced, couldn’t think fast enough for flawless execution. When the men hit the wall, Stelly fell straight onto the ground, resulting in a broken arm. “That was the end of his career and he didn’t come back,” said Hughes.

Near the end of the third season, Conrad sustained an injury while filming the episode The Night of the Fugitives. A missed cue by stuntman Jerry Laveroni and no time to tape-grip the chandelier resulted in Conrad landing on his head on a concrete floor that had been painted to resemble wood. Production was shut down the following day and Conrad was released from the hospital one week later. Conrad remarked, “I had a bad injury in 1968…a very serious injury. I had a high-temporal concussion and a six-inch lineal fracture in my skull. The last two episodes of that season were cancelled.”

After Conrad’s injury the network insisted on a regular stunt double. Additionally, Conrad had been doing rodeos and personal appearances and had to seriously curb all of his stunt activities. Not only were missed cues and over-enthusiasm causes for accidents but elaborate costuming resulted in several mishaps.

In the episode, The Night of the Wolf, stuntman Cangey staged a fight with Conrad in the train. Cangey wore a large flowing cape that eventually became wrapped around his head, “…but he (Conrad) was so involved with the stunt that he didn’t realize that I couldn’t see, and as he threw me out the door, I missed the opening and hit the door jamb with the bulk of my weight. I knocked the train nearly a foot,” said Cangey.

Stuntman Bob Herron, who originally worked with Robert Conrad on Hawaiian Eye, started doubling for Ross Martin who didn’t want to do his own stunts. However, while filming the episode The Night of the Avaricious Actuary, Ross was in costume as an aged gas meter reader and he tripped over his rifle and fell, resulting in a broken leg.

Another stuntman, Whitey Hughes, said that Michael Dunn always did his own stunts. Even in his first episode, The Night the Wizard Shook the Earth, Dunn, as Dr. Loveless, was pursued by James West into a clock tower. The tower had been rigged to explode at midnight. Although West jammed the explosive device, Loveless jumped onto the clock pendulum to force it to start again. West, however, foiled the plan by disconnecting the explosives. Regardless, the risky stunt of jumping onto the swinging pendulum was aptly performed by Dunn himself.

Phoebe Doran, who often portrayed Dr. Loveless’ assistant, said that when their agent heard about their performing their own stunts for The Wild Wild West, he was furious. “He yelled at us, ‘What are you doing stunts for!’ and ‘You should have been paid for the stunt.’ Michael and I didn’t realize it was a stunt. We thought that’s how the script was.”

Watch Videos of Stunts Performed on The Wild Wild West