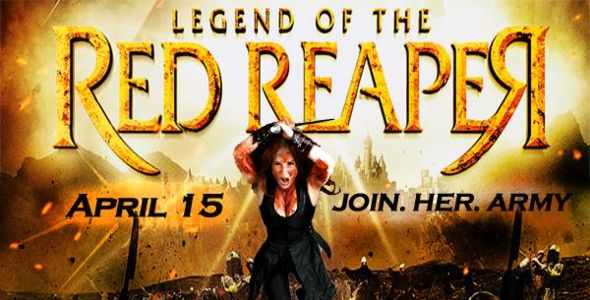 The Long, Hard Road For Tara Cardinal and “Legend Of The Red Reaper”

A feminist perspective on the sword and sorcery genre. What could possibly go wrong?

“Legend of the Red Reaper” had an incredible run of bad luck. Shady producers embezzled 40% of the production budget. The director of photography passed away during production. The director and remaining producers and even some of the cast quit.

However, just when everyone thought the production was through, lead actress Tara Cardinal picked up the pieces. She worked relentlessly to re-finance the production, self-financing hundreds of thousands of dollars out of her own savings. In order to raise more funds, she also worked part time as a wrestler on the independent circuit and completed a highly invasive medical study like her idol, Robert Rodriguez. She even put her house on the line – and lost it!

While raising funds, she re-wrote the script to accommodate the new team that came aboard and was the only producer on set for the remainder of the production.

Post-production saw even more obstacles. The post-production house lost two of her reels, containing several important scenes – and wounding the project even more.

Where many other film makers have called it quits, Cardinal instead hired 5 new editors, and edited a portion of the film herself – incorporating a new storyline to make up for the missing footage.

Armed with an action-packed rough cut, she pitched her nearly finished movie to studios and independents alike, and her journey made news in “The Hollywood Reporter” and “Indiewire”.

Much like the movie, an unexpected hero emerged in the form of legendary movie mogul Uwe Boll. Seeing potential in the Red Reaper franchise he put his full weight behind the project, guiding post-production with his expert team.

Tara Cardinal grabbed fellow fantasy author Alex Bledsoe and quickly knocked out the first of a 4-book series prequel to the film. The first book, “Sword Sisters”, was released on Dec 3, 2013 and was gobbled up by fans of the genre.

Many Film Festivals had interest in the film and the project snagged a total of 9 awards. Iconic film news sites like Ain’t it Cool and B*tch Flicks gave it phenomenal reviews. They were calling it “complicated” and “progressive”.

Despite the praise and adulation she was receiving, Cardinal recognized the inherently complex nature of an indie drama couched in sword play, wrestling moves and all out brawls – so her battle wasn’t over yet.

Just two days before the German release the movie was uploaded to a torrent site. In the first weekend it was downloaded at an estimated rate of 10,000 copies per hour. It rapidly became one of the top downloaded movies of the month, with the number of illegal downloads estimated to be in the millions.

Piracy still won’t stop the release of this little-movie-that-could or the heroine behind it. Scooped up by Millennium Entertainment, a subsidiary of Millennium Films (“Expendables”) the “Legend of the Red Reaper” is poised to sweep North America April 15th and multiple markets worldwide this summer.

Cardinal will see her film hit outlets from Amazon to Best Buy to Redbox. Then she will start work on her next novel and start filming her next major feature, “The Martial Arts Kid”, which is co-headlined by martial arts/action-movie legends Cynthia Rothrock and Don “The Dragon” Wilson.