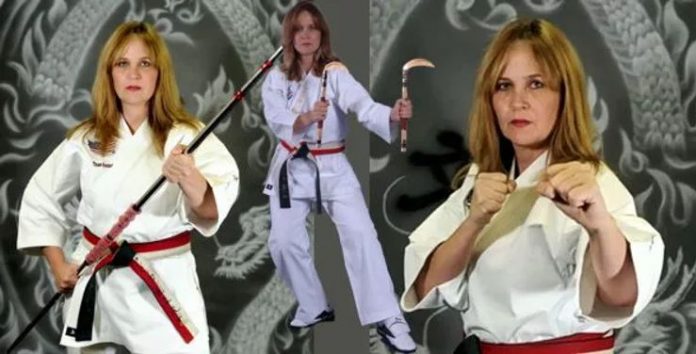 Martial artist and media personality Theresa Zaino has been cast in The Martial Arts Kid (2015).

Martial-arts and action-movie legends Cynthia Rothrock and Don “The Dragon” Wilson come together for the film, which focuses on the pair, who play an aunt an uncle, taking in an unruly and troubled young relative to their Florida beach town after the death of his mother. Soon, in an effort to channel his anger and rage, they begin to teach him martial arts.

Theresa Zaino was an “Air Force Brat” from the day she was born at Fort Dix, New Jersey on January 29, 1963 and spent most of her childhood in England and upstate New York. Her family later settled in Palm Beach County, Florida when her father retired from the United States Air Force in 1972.

While committed to the GoJu-Ryu style, she has also studied the arts of Tae Kwon Do and Thai Boxing. Throughout her training, Theresa Zaino has competed at martial arts events on a State, National and World level.

For 9 years Theresa Zaino operated a commercial martial arts school along with her partner and husband Danny Zaino, specializing in children’s programs. She also assisted with the martial arts training of her three young adult children” Tony, Joey, and Dominique Zaino.

Theresa Zaino is also the chief editor for their “Martial Arts Entertainment Magazine” online publication and one of the stars of the “Martial Arts Show Biz TV” online television show, starring the Zaino family – which is a reality based online show that helps promote martial arts celebrities, movie stars, Hollywood movies, events and products.

Because of her love for the entertainment business, in 2010 Theresa Zaino started her own Florida State talent agency and – as of 2012 – has her own SAG-AFTRA franchised talent agency in Jupiter, Florida – the “Action Entertainment Talent Agency”.

The Martial Arts Kid (2015) will start filming this June and is scheduled to hit theaters in the Summer of 2015.