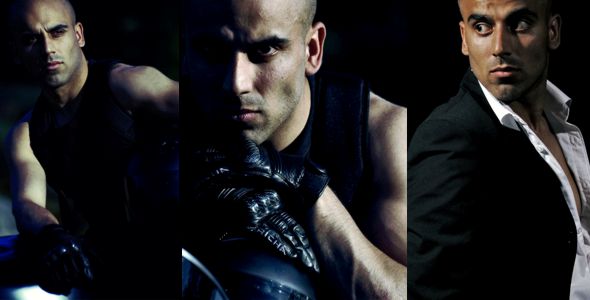 Umar Khan has it all- looks, talent and a booming  acting career! Born in Lahore (Pakistan’s eastern border with India). His family moved to Sweden when he was 2 years old. He was 7 years old when he watched his first American action film and he knew right away that action films was something he wanted to pursue. Umar Khan set his sights on becoming an actor and planned to do all of his own stunts. He practiced by copying fight scenes from the many action movies he watched and later developed an interest in fight choreography. This led him to choreograph his own fight scenes. While in elementary school, Umar would borrow the schools camcorder and shoot his own action films. He would scout the locations and chose his co-stars. In 2002, a friend of his informed him about a shoot that was taking place nearby. They were looking for people with fight skills, so Umar Khan went to the location and he got a part fighting. He was later chosen to play the led role in a longer version of the TV show.

The rest, as they say, is history. Umar Khan became a hot commodity as an actor, not only for his versatile acting skills, but also for his amazing martial arts talent. Inspired by some of the many great action stars, including Sylvestor Stallone, Jet Li and Jean Claude Van Damme, it didn’t take Umar very long to follow in their footsteps. He was also inspired by such actors as Leonardo Di Caprio, Christian Bale and Denzel Washington for their impeccable acting skills.

Umar Khan saw his career take off with such films as Veracious Perception where he played the lead role of Robert Martinez. Umar Khan played in the films Miami Heat, The Hitman and The Test. Hollywood anxiously awaits their next action star and Umar Khan hopes to take on that role. You will find Umar Khan in numerous projects including the upcoming production of Life’s Building, a feature film set to shoot in 2014, where he plays the lead role of Amin.

There is no stopping moving target, Umar Khan. He is a triple threat, with looks, talent and a contagious personality!