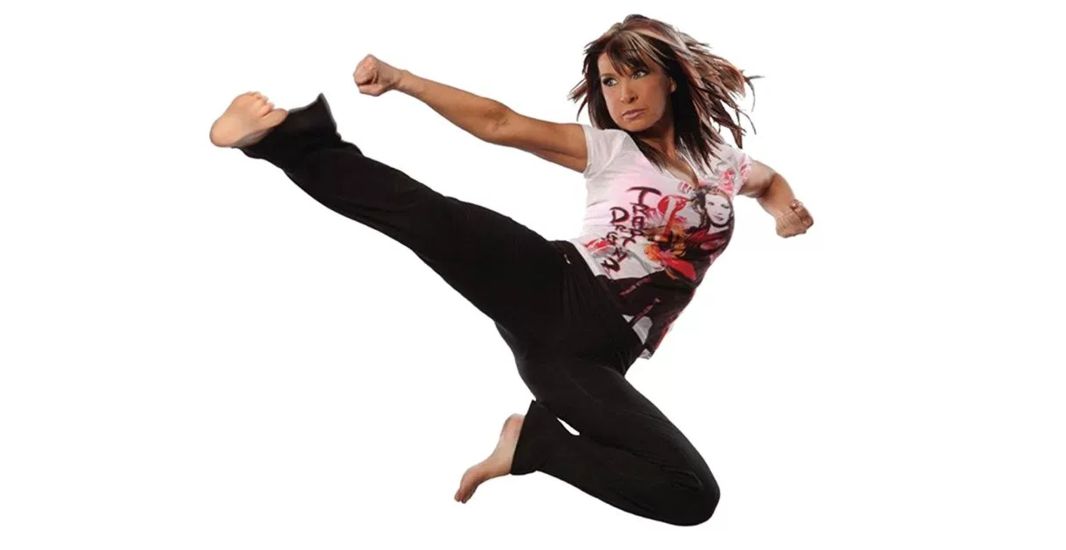 In the last week, it was confirmed that Cynthia “Lady Dragon” Rothrock and Don “The Dragon” Wilson will begin filming “The Martial Arts Kid”, which was originally announced this past December, this coming spring. It is Rothrock’s first action/martial arts film as a lead since 2004’s “Sci-Fighter”.

Rothrock who has starred in 43 action-films in her career will play the aunt of a troubled teen who moves to a beach town in Florida after the death of his mother. Don Wilson and she both teach him martial arts as a way to heal and to protect those he cares about, and himself. Others already confirmed for the film are Natasha Blasick (“Meet The Spartans”, Sasha on “Days of our Lives”) and Tara Cardinal (“Legend of the Red Reaper”), Inga Van Ardenn, comic Graham Elwood, Jeff Behar, Adrienne Camill and TJ Storm.

Co-producer James Wilson (Don’s brother) is also “pleased as punch” to have landed Sofya Skya, a famous Russian ballerina, actress and former Mrs. World who co-starred with Christian Slater in “White Swan”. James Wilson says they are looking for a “name” to play the title role, one of the few yet to be cast. – and that an announcement on that may be soon and surprise some people.

Former Tampa Bay Buccaneer Cheerleading Captain and Playboy model Vicki Vodar has also been cast as a high school teacher in the film. “We are having her play a serious role”, said James Wilson. “We are not doing a ‘Hot For Teacher’ video. We are respecting her as an actress. Though there’s no way we could make Vicki not beautiful, to us having her play it straight was much more interesting than having her running and bouncing in a bikini on the beach.”

For her part, Vodar is excited at the prospect of working with both Don Wilson and Rothrock on a project. “I got to meet Don at the Traditionz Movie party that was promoting The Martial Arts Kid”, says Vodar.. “He was very gracious, friendly, and down to earth. … I look forward to working with him. His reputation is quite impressive. He is probably one of the greatest Kickboxers of all time, not to mention his long list of acting credits.”

“I haven’t met Cynthia Rothrock yet, but I look forward to working with her too”, Vodar adds. “I love confident,strong women.”

For her part, Rothrock is looking forward to the film as well. “I’m pretty excited because it’s the first film Don and i are going to be the lead together”, she says.

“It’s a little different from the films we’ve done in the past. It’s a family film with a lot of action.”

Rothrock’s daughter Skylar may be in the film as well. “That’s kind of a pretty cool possibility, her maybe being in it. having her work with me and have a mother-daughter team-up. That would be very cool.”

Former kickboxing champion Cheryl Wheeler Duncan is another co-producer on the film. Composer/songwriter Martin Blasick an Oscar nominee for “Magic Mike” is a contributing songwriter. Emmy award winning composer Boris Zelkin is doing the soundtrack. Cinematographer Denis Maloney is on board . He shot “The Contender” with Jeff Bridges, Joan Allen & Gary Oldmann, and “No Vacancy” with Timothy Olyphant & Christina Riccci. Michael Baumgarten is the Director /Screenwriter. He is an award winning screenwriter notably for “Smitty” with Peter Fonda, Mira Sorvino & Louis Gossett , Jr.

The film already has a budget and is set to start filming this spring, but James Wilson says they are doing a Kick-starter campaign for “extra funds”. And to show support for the film and create a buzz.

“Casting is ongoing for many roles. This is the beginning”, says James Wilson, Don’s brother, who along with former kickboxing champion Cheryl Wheeler Duncan is producing the film and says they already have enough funds to proceed, but are hoping to raise more than an average direct-to-video flick would require, with the intent being a film that will look good on the big screen.

“We are using Kick-starter as a tool to raise EXTRA funds and as a promotional tool”, James Wilson adds. “We also want to prove that there is a large demand for a true martial arts films with people like Don & Cynthia.”

If successful, this will be the first film starring the legendary Rothrock that will be shown in U.S. theaters. Amazing when you think about it.

“I feel really good about it”, says Rothrock. “This is going to be one of those films that looks like it will have enough of a budget and enough care to make sure everything is done the right way. From the script to casting to the music we use in certain scenes, James and Cheryl are making sure every detail is taken into account and that everyone is putting forth their best effort into making a great film. That’s very exciting to me.”