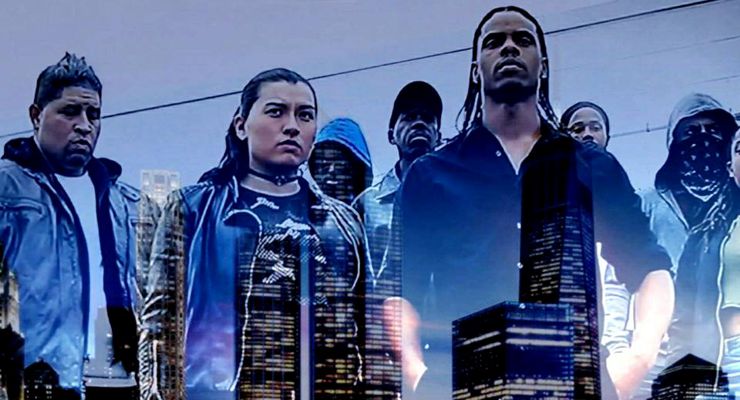 FINAL CONTACT (2018) WEB SERIES REVIEW
The web is quickly being dominated by a multitude of low or no-budget independent films and web series. This is because we live in and age where anyone can create online content. They post it on platforms like Youtube in the hopes of finding a dedicated audience that will appreciate and share their work. Of course everyone involved also hopes the project will somehow benefit their future careers. It’s actually a very typical approach where like-minded people band together to create a project with unbridled passion.

After watching the first of the ten episode series FINAL CONTACT I am a bit perplexed. The first 5+ minutes are highly artistic with stylized black and white footage with hints of red blood that are a stark contrast to the otherwise colorless footage. About halfway through the episode it changes to full color only to revert to black and white near the end. I assume this was inspired by an emotional change the director was trying to convey, but I missed it. All in all, the overall look of the piece was pretty bad. Both the black and white and color sequences had very flat light, so I can only assume they had no lighting equipment or bounce boards to properly light the environments and/or highlight the talent. In my opinion I think that lighting is one of the things that differentiates the amateurs from the pros. Unfortunately, many people think that if there is natural light there is no need for lighting gear… this is a mistake.

The other thing that is of major importance is the sound. Since FINAL CONTACT is almost entirely devoid of dialogue, we are forced to watch the footage with a low/redundant musical drone until about two and a half minutes in. Then the music changes a bit and the fighting sound effects begin. I don’t know if these fight sounds were too loud, the music was too low, or the audio just wasn’t mixed at all during the post production process. But, in the end, the sound suffered greatly, which took away from the overall experience. Actually, I found the music over the end credits powerful and inspiring…. why wasn’t it like that during the actual episode?

But now we have to get to the content, which is driven by action. Fighting on film is an art and for the most part all those involved had good technique. However, the wide arcing (I already know you are gonna block this) hook punches were in abundance and many times performers would pause in expectation of an incoming strike. Some of the performers had great screen presence, especially Tarell Southwind Bullock and Raymond Blong. Both definitely had memorable looks and skill sets to match. The choreography was well thought out and innovative, using the environments rather well. All the fighters were skilled and passionate in their performances, but after 6+ minutes of similar action it became a bit monotonous. The hero kept running down hallways and stairways fighting groups of people who charged forward in waves. I get the vibe. I’ve seen it in projects like THE RAID or DAREDEVIL, where the bad guys keep coming and the action never stops. However, on a low budget scale it is hard to duplicate. Without bigger stunts (wires & breakaways) there just aren’t any solid pay offs… just guys (and girls) falling down like dominoes.

Lastly, although the performers were competent, the cinematography failed to capture any close ups that conveyed the type of emotion that is needed to make the audience feel what they are feeling. In fact, the shots would often cut from wide shot to wide shot, or medium shot to medium shot. Again, this is an amateur mistake.

Ultimately, this episode could have benefited from a pace increase. Two and a half minutes of lead in before the fights started was too long (and boring). If you haven’t captured a viewer in the first minute, they may stop watching and move on. The fights were good but in desperate need of more practical effects. Finally…at the end…the hero draws a gun (that he must have had the whole time) and shoots the bad guy. What? Why didn’t he start with that? If he is military (as his garb illustrated) he would have had extra magazines of ammo. Anyway, that choice made the peril of all the unarmed combat meaningless.

FINAL WORD – The talent/skill level of the performers and choreographers was certainly above average, but they neglected everything else for some reason. The thought that pointing a DSLR at people and shooting action scenes without the benefit of proper lighting and sound is short changing everyone involved. Respectfully, if you put twice as much effort into the technical aspects as you do the fights, the future episodes of this show would definitely benefit.