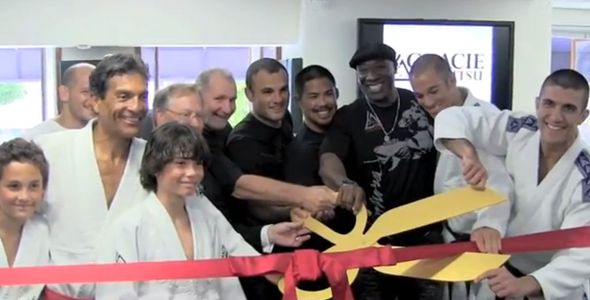 Michael Clarke Duncan the Actor and Former Bodyguard was a Brazilian Jiu-Jitsu purple belt and trained at Gracie Academy in Torrance, California.

By Dennis McLellan, Los Angeles Times – Michael Clarke Duncan was a gas company ditch digger in Chicago who followed his dream of acting to Hollywood. The massively built actor played a gentle death row inmate in the 1999 prison drama. Michael Clarke Duncan, the tall and massively built actor with the shaved head and deep voice who received an Academy Award nomination for his moving portrayal of a gentle death row inmate in the 1999 prison drama “The Green Mile,” died Monday. He was 54. Duncan died at Cedars-Sinai Medical Center, according to a statement from his publicist, Joy Fehily. He had suffered a heart attack in July and did not recover. A former ditch digger for a natural gas company in his native Chicago, Duncan began his Hollywood saga as a celebrity bodyguard in the mid-1990s. He received his first big acting break playing a member of the drilling team sent into space to blow up an asteroid heading to Earth in the big-budget 1998 movie “Armageddon,” starring Bruce Willis. But it was “The Green Mile,” starring Tom Hanks as a death row prison guard in a Louisiana penitentiary during the Depression, that thrust the 6-foot-5, 300-plus-pound Duncan into the limelight. He portrayed John Coffey, a gentle giant with supernatural powers who has been sentenced to death for the murder of two young white girls.

“There was something about him that I just couldn’t ignore,” writer-director Frank Darabont said of Duncan in a 2000 Daily Variety interview. “After his first reading, he kept haunting me. Given that he was a fairly inexperienced actor at that point, obviously there was a concern about ‘Gee, how would this guy do?’

“But once we put him on film, it became apparent that he was up to the task.” Duncan credited acting coach Larry Moss with teaching him “how to dig within myself” for the heavily emotional crying scenes in the movie. “I’m an emotional person, a very emotional person,” Duncan told the Chicago Tribune in 2000. “All those tears you see in the movie were mine.” In 2002, two years after the Academy Awards ceremony, Duncan told the Orange County Register: “Realistically, I didn’t think I would win the Oscar, but the nomination was a personal validation for me. It proved to me that I was a good actor. More important, it showed other people that I was a serious actor.” Duncan later appeared in films such as “The Whole Nine Yards” (2000), “Planet of the Apes” (2001), “The Scorpion King” (2002) and “The Island” (2005). He also did voice work in films and television, including “Brother Bear” (2003) and “Kung Fu Panda” (2008). He was born Dec. 10, 1957, and grew up on Chicago’s South Side. His father left the family when he was 6, and he and his sister, Judith, were raised by their mother, who steered him clear of gangs, drugs and alcohol. Growing up, he harbored dreams of becoming an actor. “Of course, people told me, ‘Mikey, you will never be an actor. You don’t have the look. You’re ugly,'” he recalled in a 2003 Chicago Sun-Times interview. What helped him, he said, was that his mother “always told me to think ‘YCDA.’ That stands for ‘You Can Do Anything.'” Duncan attended Alcorn State University in Mississippi but left before graduating to help support his ailing mother. Back in Chicago, he began working for the gas company. On the job, he talked so much about his dream of going to Hollywood and becoming an actor that his co-workers dubbed him “Hollywood Mike.” He finally quit his job and became a security guard for a traveling show. Once the show reached Los Angeles, he decided to stay.

Working first as a bodyguard for Martin Lawrence, Will Smith and other stars, he began landing small parts in films and television. In 1998, he played bouncers in “Bulworth” and “A Night at the Roxbury” and a bodyguard in “The Players Club.” While making “Armageddon,” Duncan became friends with Willis, who was instrumental in getting him the role in Darabont’s adaptation of Stephen King’s serial novel “The Green Mile.” “Bruce told me, ‘Michael, I’ve just read this script and you are this guy John Coffey. I just know it,'” Duncan recalled in a 2001 Ottawa Citizen interview. Willis said he’d call Darabont — and he did, telling him that he had found the man to play the role. PHOTOS: Michael Clarke Duncan 1957-2012 “I’m used to being the big tough guy, the bodyguard type,” Duncan told the New Orleans Times-Picayune in 2000. “I had never taken a role like this. I started reading the novel and couldn’t put it down. I got emotional while reading it. Once I finished it, I said, ‘That’s me. I don’t care what I have to do, but I’ve got to play this role.'” As “The Green Mile” was about to open in theaters nationwide in 1999, Duncan told the New York Times, “This is really like a gift from God. I tell people, ‘It’s just like a cliche, but it’s true: In Hollywood, dreams can come true.'” Besides his mother, Jean, and his sister, Judith, he is survived by his fiancee, actress Omarosa Manigault.