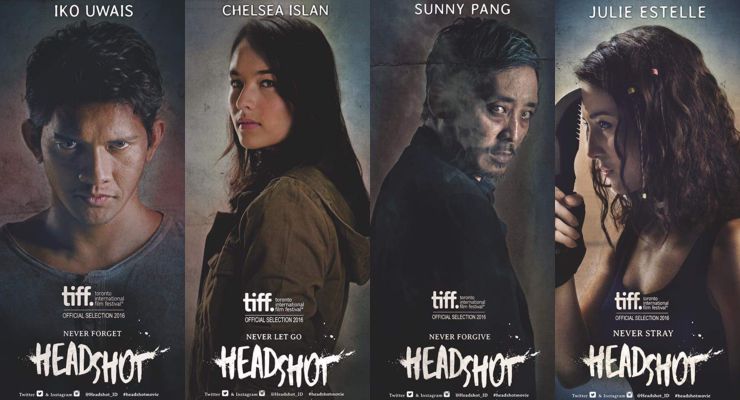 Headshot (2016) opens with the scene of a bloody prison break where policeman and prisoners are shooting one another in a narrow hallway. Thus begins the story and Iko Uwais plays a young man with a serious head injury caused by a bullet to the head. In a coma, he washes ashore on a small island, where he is nursed back to health by Dr Ailin, played Chelsea Islan, a young student doctor in the island’s rural hospital. When he awakens from the coma he has no idea who he is so she calls him Ishmael and the two form a bond. While recovering, his violent past comes back to haunt him. More violence ensues and he is forced to confront his true identity as he fights to rescue his doctor who has been kidnapped by

Iko Uwais and his team were responsible for the action and stunt choreography for Headshot (2016) and each character in the film has their own fighting style using arts such as silat, wushu etc. based on the fighting ability of the actor.

Although deemed extremely violent by many critics others feel that Headshot (2017) has some of the years best fight scenes, each different enough to keep fight junkies on their toes.

“Those fights are amazing. The choreography is as astonishing as it is intricate. Headshot‘s best scene finds Ishmael fighting an attacker in a police station while handcuffed to a table. From there, the sequence gets even crazier. It moves from the interrogation room into the main area. Desks, filing cabinets, and typewriters become weapons, objects of defense, or both.

The other fights – and there are about five or six more – are equally inventive. They’re what Headshot exists for, but thankfully, they don’t feel repetitive.  Directors Kimo Stamboel and Timo Tjahjanto ensure that each one (fight) is just different enough from the one that preceded it. They also have a really engaging way of filming the mayhem. Their camera circles the action from a distance before moving in tight so that we can study what’s happening up close. We almost feel as through we’re in between the combatants as they execute their martial arts moves. This approach proves phenomenally effective, ensuring that the fights are continually enthralling.”