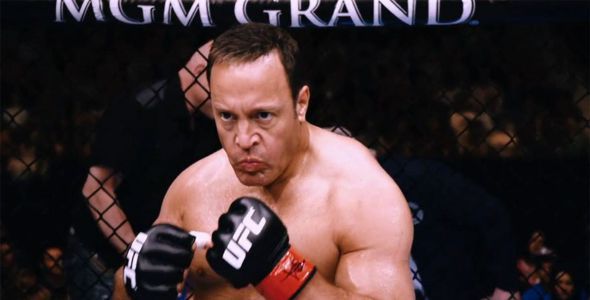 In the comedy Here Comes the Boom, Former collegiate wrestler Scott Voss, played by Kevin James, is a 42-year-old apathetic biology teacher in a failing high school. Cutbacks threaten to cancel the high school music program and to lay off the music teachers. Scott wants to raise money to keep the program going, and after seeing how much money MMA fighters make, he decides to learn to fight and then to moonlight as a mixed martial arts fighter, so he can donate his winnings to the school. Everyone thinks Scott is crazy – most of all the school nurse, Bella – but in his quest, Scott gains something he never expected as he becomes a sensation that rallies the entire school. Our own Bas Rutten and Joe Rogan have parts in the movie.